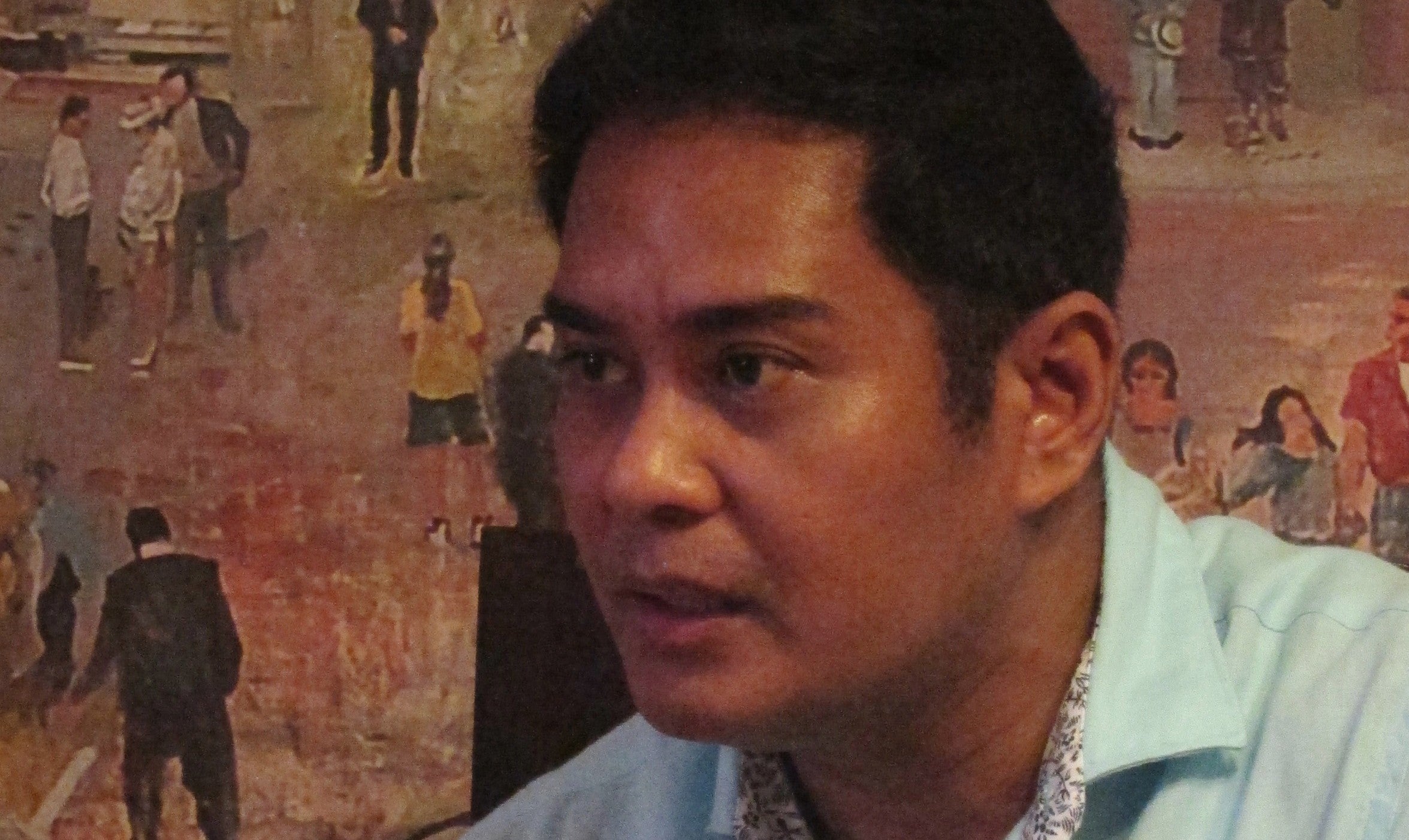 John Arcilla: “I realized this was not an easy character... [Luna] was an artist and an ‘ilustrado.’ He studied pharmacy. He was a sharpshooter. He finished military science. He couldn’t be the type of person who would have an outburst just for nothing.” PHOTO BY NASTASHA VERAYO

I didn’t like Antonio Luna at all,” John Arcilla blurted out halfway through a slice of pizza. “No, really, that was my initial reaction.”

We were in an Italian restaurant near his home; and the actor, though famished after spending the better part of the day on the road for a mall tour to promote the film “Heneral Luna,” was recounting events that led to his role as the notoriously hot-headed Filipino general.

“He’s not so complex,” Arcilla elaborated on his early misgivings about the character. “He’s just outbursts and being a mad dog.”

The award-winning stage, film and TV performer had instead set his sights on Juan, the older Luna sibling. “The flow of his emotions was very different,” he noted. “He killed his wife. He’s the jealous type. He’s an artist [while] Antonio Luna was just fiery, and fiery is all an actor would ever do [to portray him].”

But Arcilla accepted talent coordinator Mara Andres’ offer for him to read for the role nonetheless. He thought it was just for a student’s thesis, for which he would often oblige UP students who sought his help.

When the actor showed up for the reading, the two persons he mistook for students setting up their production gear turned out to be major players behind the breakthrough historical film. One was the multitasking indie filmmaker Jerrold Tarog, who not only wrote the screenplay and musical scoring but also took on directing and editing duties.

Tarog and his script offered the would-be heneral clarity of vision for the film, and a new perspective of the man who led Filipino forces in the Philippine-American War.

“I realized this was not an easy character,” Arcilla said, “[so if I were] to make him a mere mad dog, binabastos ko ang kasaysayan at babastusin ko ang Pilipino, because Luna was apparently not like that.

“He is an artist and an ilustrado. He studied pharmacy. He’s a sharpshooter. He finished military science. He couldn’t be the type of person who would have an outburst just for nothing.

“I had to put different colors in all of his outbursts, which actually come from a genuine love of country, respect to his duty as a military leader, and as a son and as a lover.”

Shaping Antonio Luna into a real person, while putting into consideration who the man was as well as the audience’s intelligence, comprised what Arcilla would call one of the good things about being an actor.

“You don’t just read the story,” he said. “You experience it [internally] and discover where the character is coming from… You can discover in the details where each scene and intention comes from.”

All that effort showed on the big screen. Arcilla’s Luna ended up as a gutsy, career-defining performance hailed by critics as compelling, powerful, inspired.

At the end of screenings, audiences would applaud. These were the same people willing to—and actually did—watch the film again, the ones who gushed  on social media and demanded that “Heneral Luna” not be pulled out of cinemas.

How timely that Arcilla has put himself out there, so to speak, at the height of the powers of Facebook and Twitter, which we all know can propel celebrities to stratospheric heights or, inversely, bring them crashing back down to earth.

As a result, Arcilla’s already prolific career, which includes roles in foreign films like Hollywood’s “The Bourne Legacy” (2012) followed by the British-made “Metro Manila” (2013) and boasts an enviable variety across different platforms—from historical or commanding figures to the everyman—is now punctuated with a Filipino hero who has launched a thousand memes and a plethora of multimedia fan art.

In fact, the latter had so impressed the film’s online promotions team and a major local chain of bookstores that they decided to sponsor a nationwide fan art contest.

Arcilla’s Luna will also go down in history as one of Pinoy cinema’s intensely quotable characters. Borrowing the general’s lines has even earned its own hashtag, since it has influenced pop-culture lexicon so much already. It’s not only cool to speak #hugotHeneral in relation to daily life and frustrations, the words have become a reflection of the Filipino sentiment toward politics and society as well.

Of course, numbers remain the best indicators of success. The film, now on its sixth week at the cinemas—a feat, considering the local market has long been saturated with imports—has crossed the P200-million mark. Its producers have declared it the highest-grossing local historical film of all time.

Perhaps the cherry on top would be that “Heneral Luna” has been chosen as the country’s Oscars bet for 2016. An international film distribution company has picked it up for screenings in North American theaters beginning Oct. 30 and an overseas tour commences in Melbourne, Australia, this weekend.

You might say Arcilla was molded for the role of patriot.

One of eight children in a family of nonprofessional artists, Arcilla grew up with more than enough encouragement to pursue his creative interests, even when the household transferred residence to his mother’s plantation in Baler, Aurora—a decision owed to a father who was politically active when the Marcos government declared martial law.

He had siblings who played musical instruments. His mother’s relatives were fond of writing and reciting poems. His father encouraged discussion at the dinner table, no matter if a lot of it was about what they heard from a religious show on the radio, and fostered an atmosphere where his children could learn critical thinking.

“Nabaliw ako to express everything that I could express, so I sang and performed in the middle of the plantation,” said Arcilla, describing himself as a city boy whose daydreams got the better of him after being transplanted in the middle of a coconut farm, with the nearest neighbors a kilometer away.

At a young age, he was eager to live as a transient, moving from one relative’s place to another in order to experience culture and the arts (watching moro-moro was his first experience of local theater)—and actually become part of it.

He sang Broadway songs and danced in school events, joined singing contests, and eventually formed his own band of young cultural performers.

Throughout these extracurricular interests, Arcilla maintained an excellent academics record. He is what you might call a perennial scholar, qualifying for academic and acting scholarships such as at St. Joseph’s College where he took up Mass Communication with a major in Screenplay Writing; the ABS-CBN writing caravan, and actors’ training programs under Dulaang UP and the Cultural Center of the Philippines.

Having a creative yet critical mind led Arcilla toward community service. Close to graduating from college, Arcilla got hooked on Manila’s parliament of the streets, in which he became one of the voices that organized communities toward pushing for better government.

The experience served him well when he joined the community-based efforts of the Philippine Educational Theater Association, years before he went mainstream. It continues to serve him well now that he has his own organization, The Capable Foundation, which combines his love of the performance arts with his interest in social service.

The foundation, Arcilla explained, offers complementary education for holistic development programs, including science and math tutorial as well as cultural education for kids; seminars on environmental issues and fitness events.

All the actor-mentor asks in return is for the beneficiaries to pay it forward.

“If I’m going to give free workshops, the kids should pay me not in monetary form but in social service,” he said. “They will schedule ‘operation linis,’ assist victims of typhoons, or for a river cleanup. They’re encouraged to look for an ecologically unhappy area and do something about it.”

In terms of career, however, what’s next for the country’s most popular actor at present?

Arcilla is mum about who it is, for now, but explained his purpose for being interested in capturing onscreen the plight of his fellowmen: “Before I’m an actor, I am a citizen of this world and of this nation.”

“You cannot just be an actor and be an actor for yourself, for your own sake or self-satisfaction,” he added. “As actors we have a noble role. We’re not just here to be idolized. We have big responsibilities, in all its idealistic sense.”