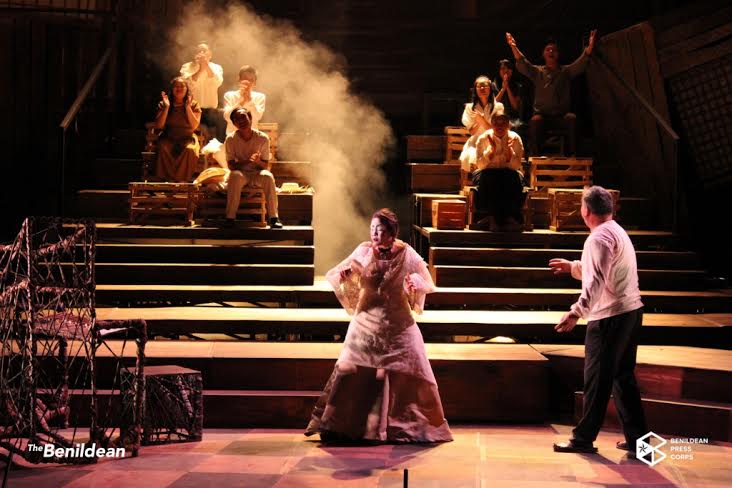 Sometimes, all a production needs to do to make the audience appreciate the material, especially if it is well-written in the first place, is to render a straightforward retelling.

Spectacular visuals, jaw-dropping scenery, stirring music, exquisite costumes—all these can enhance the value of the production, but what if these secondary elements end up stealing the thunder from the drama at the core of the play?

This is the unfortunate case with De La Salle-College of St. Benilde’s recent production of “Palasyo ni Valentin,” written by Mario O’Hara and directed by Nonon Padilla. The play, which won first prize in the 1998 Philippine Centennial Commission’s literature competition, was first staged by Soxie Topacio for Peta a few years ago; we didn’t see that production, so we came to this new venture with the freshest of eyes.

“Palasyo ni Valentin” is the heart-rending recounting of the fate of Philippine theater through the country’s history—from the last days of Spanish colonization to the dawn of World War II. The dwindling popularity of the zarzuela, the garish outbreak of vaudeville, the lightning-speed popularity of film—all these are seen through the eyes of Valentin (Ricky Davao), the loyal caretaker of Palacio, a theater that has seen better days.

Valentin, an old man in his 70s, relives through his imagination and tortured dreams the rise and fall of his beloved hall, which has become his second home. Through his eyes, the audience also revisits historical moments like the crackdown on the Katipunan, the Aguinaldo-Bonifacio feud, and the capture of Macario Sakay.

But Valentin is not just a mere historian, but also an active participant in the drama. “Palasyo” is his personal story of romance and regret, passion and anguish.

O’Hara’s script makes the distant eras alive and ultimately relatable by making his characters all too real.

Valentin is not a hero by any means, but a perceptive, temperamental indio who simply wants his own small place in the sun in a land dominated by brutal oppressors. His object of affection, Diding (Thea Gloria), is a wannabe star torn between survival and true love.

The villain of the piece turns out to be Alfonso, the Spanish impresario whose cruelty derives from his own experience with betrayal, infidelity and sexual impotence. Juliene Mendoza as Alfonso was the actor to beat in this production.

Sherry Lara’s Carlota, Alfonso’s wife and fading grand dame of the stage who fights to maintain her last sliver of decency in a world going mad, also more than held her own. These two veteran actors made you feel their internal anguish and their attempts to claw out of it, despite the hideous masks and piles of wigs and wardrobe lavished on them by Padilla that could have overwhelmed any other performer.

But Padilla, whose visual flair is typically an instrument to invite the audience to dig deeper into the material, appeared to have overindulged himself in this “Palasyo.” There was too much happening on stage, with past, present and future, as well as the real world and the internal chambers of the protagonists’ minds, that whatever distinction was lost.

When these lines are crossed without a guiding hand to act as an intellectual map, confusion results and the heart of the story is lost, as we feared happened here. Unwarranted gimmicky moments like comic bits and inserted action sequences—granted, some of them appeared unintentional—robbed whole scenes of power and pathos.

Alfonso, Carlota and Diding sported colorful, highly theatrical masks evoking Japanese classical drama that branded them as either angels or demons, perhaps as seen through Valentin’s mind. Toto (Andrei Vegas), Valentin’s right-hand guy in the theater, played his probinsyano accent much too broadly and for laughs—quite unforgivably in that scene where Davao’s Valentin was delivering what should have been a moving monologue.

The unveiling of Valentin and Diding’s murdered baby was graphic, a grim grab at shock value; and the finale—Mendoza’s Alfonso crumpling to his death on top of Diding’s casket—proved to be more comical than compelling, and was of no help to the final moments of O’Hara’s script.

The tender ode to lost love and faded memory at the heart of “Palasyo ni Valentin” disappeared in what appeared to be a single-minded pursuit of a multi-layered interpretation that eventually ballooned into visual and storytelling excess. A more intelligible, less bells-and-whistles take would have done more justice to O’Hara’s already textured script.