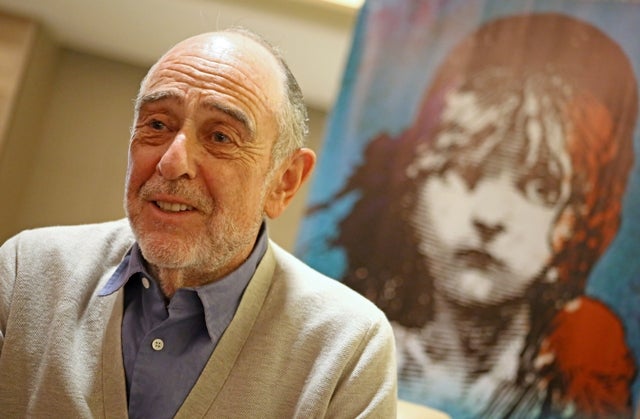 “The music will remain the same, but the staging and the set design are now completely different... [It will be] unlike anything you’d seen before.” PHOTOS BY KIMBERLY DELA CRUZ

You might have heard the soundtrack dozens of times and probably know the lyrics by heart. Or you could have watched repeatedly the various performances on Broadway or the West End, finding each one more moving than the last. And as a die-hard “Les Misérables” fan, chances are you would have preferred to look at the strengths of the movie version, instead of dwelling on its shortcomings.

Regardless of how much you think you know the musical, the production that will be touring in Asia and will be performing in Manila in March 2016, is “an entirely different one, unlike anything you had seen
before.”

It sounds like another grandiose claim by an enthusiastic producer, but this time the words, said quietly with a mixture of dignity and charm, came from none other than Claude-Michel Schönberg, one-half of the legendary French duo (lyricist Alain Boublil is the other half) who recreated Victor Hugo’s epic novel “Les Misérables” into a piece of musical theater, followed by “Miss Saigon” and “The Return of Martin Guerre.”

“Les Mis,” first performed in London in 1985, remains one of the most popular and long-lasting shows in the history of performance art.

Schönberg was in Manila a few days ago, partly on vacation, and partly to visit the  restoration of a small town in Leyte which had suffered extensive damage from Supertyphoon “Yolanda” in 2013. Like millions of televiewers all over the world, Schönberg and Boublil watched in horror as the calamity destroyed an entire region and claimed thousands of lives.

Soon after, along with Philippine theater icon Lea Salonga and other Filipino theater artists, they held a special two-day concert in Manila in February 2014 that raised at least $29 million to build housing for the displaced victims.

“Around 259 houses and one school have been built,” said Schönberg. The housing project built for Yolanda survivors is called the Sun and Moon Village.

The composer’s enthusiasm was also palpable as he spoke about the Asian tour that is celebrating “Les Mis’” 30th anniversary. This new production, which is on its second year on Broadway and has broken box office records in the United States and Canada, is topbilled by stage luminaries Simon Gleeson (Valjean), Earl Carpenter (Javert), Kerrie Anne Greenland (Eponine) and Chris Durling (Enjolras).

In Manila, the Philippines’ own Rachelle Ann Go will be playing Fantine.

Not a museum piece

“You cannot have a museum piece,” Schönberg said, noting the changes that productions have to go through to adapt to the times. “The music will remain the same, but the staging and the set design are now completely different. Victor Hugo’s paintings have been used as part of the design.”

Schönberg added: “Technology has also changed a lot since the original production in 1985. What was an extravaganza before may be considered simple now. You have to do more and achieve more.”

“I loved 90 percent of it,” said Schönberg. “It is a movie and there will always be little bits and pieces that you would want to change. But audiences loved it, and there were standing ovations in the screenings in New York and Los Angeles which we attended.”

Schönberg himself received a Golden Globe and a Grammy Award in 2012 for his work in adapting the stage music to the “Les Mis” movie version.

Almost 20 years ago, Repertory Philippines staged an all-Filipino version of “Les Mis” which ran for a then unprecedented two months of weekend showings in Manila.

“I did not see it,” recalled Schönberg. “I came here for one rehearsal only, and I remember meeting Cocoy Laurel who played Jean Valjean. But I was not able to see one entire performance.”

That all-too-brief encounter with an all-Pinoy “Les Mis,” though, is overshadowed by Schönberg’s long-standing relationship with the Philippines, its artists and its people. Time and again, the composer would recount how a chance viewing of a movie directed by Lino Brocka, aired on an international channel in Paris where he was staying in 1989, led him, Boublil and “Les Mis” producer Cameron Mackintosh to the country.

“I had to tell Cameron that we should make a stopover in the Philippines,” recounted Schönberg, because he could not get Brocka’s imagery out of his mind. “There was a lot of fire, there was war, and yet the people were singing. And the music was fantastic”—the awe still evident in Schönberg’s voice years after the fact.

It was the combination of conflict and melody that gave off echoes of what would become “Miss Saigon,” the musical that would catapult Salonga to international stardom and open the doors for many other Filipino artists to show their talent in various stage productions around the world.

Schönberg’s Philippine connection was further cemented with his adoption of a Filipino female child who has now grown into “a beautiful 22-year-old Parisian woman,” said Schönberg. Margot, his adopted daughter, “is taking up design, and we are very close.”

The adoption process was difficult. “It took a long time,” he said, “but Cocoy helped. So did his father [Salvador Laurel] who was vice president at that time. President Cory [Aquino] also helped.”

Is there anything more that he dreams for “Les Mis”?

“To stage it in an opera house with opera singers—now that would be different,” he said after a pause. “But the show has given me 10,000 times more than what I can give it.  There is nothing more that I can ask.”

Cameron Mackintosh’s new production of “Les Misérables,” brought to Manila by Concertus Manila and Lunchbox Theatrical Productions and presented by Smart Infinity, will open March 11, 2016, at The Theatre at Solaire. Visit ticketworld.com.ph and lesmis.com.ph.