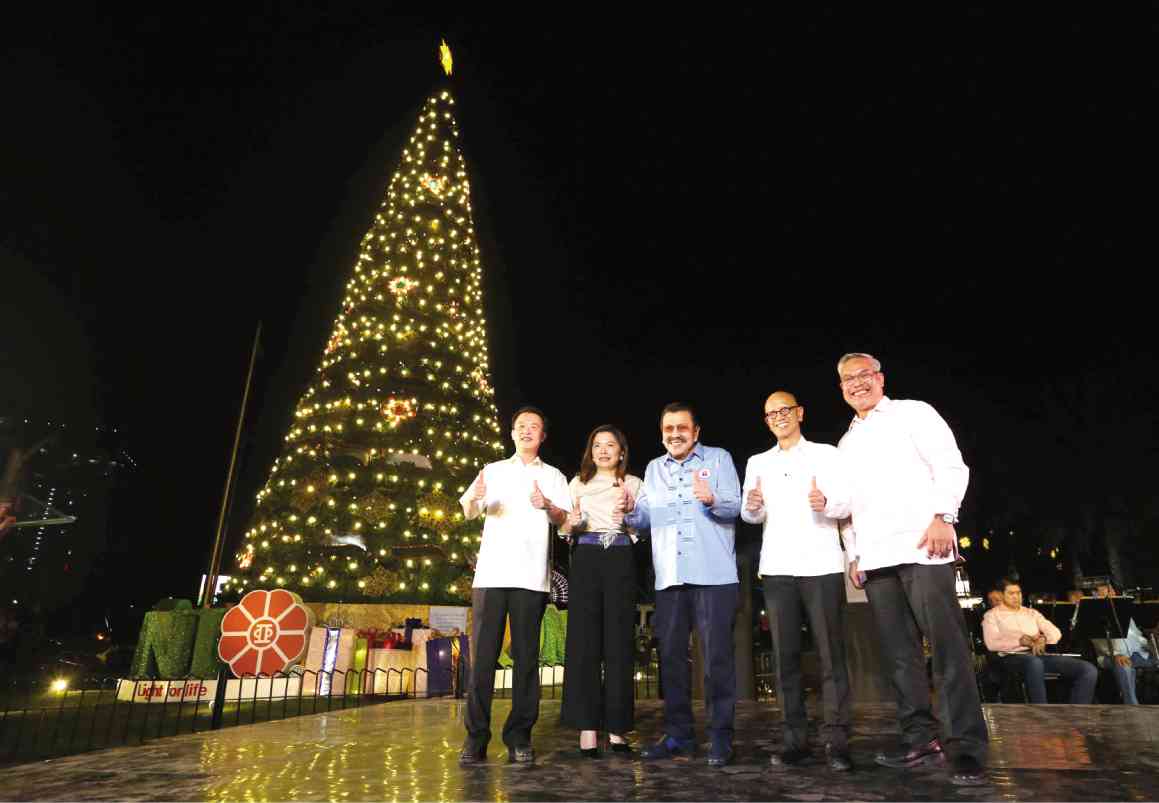 A tree glows on Roxas Boulevard

THE LAST time a giant Christmas tree was lit in front of the iconic facade of the Cultural Center of the Philippines (CCP), old-timers recall, it was little Aimee Marcos who pulled the ceremonial switch.

Now little Aimee isn’t so little anymore. But then, Roxas Boulevard isn’t what it used to be either.

Thanks to the Apec (Asia-Pacific Economic Cooperation) summit, with a little help from Typhoon “Lando,” the human flotsam that set up house along the seawall has been swept away in the effort to present the best possible face for the country to the world leaders who have started to arrive in Manila to discuss “inclusive growth.”

The sunset on Manila Bay is still stunning, but Roxas Boulevard—once envisioned by the American architect Daniel Burnham as a scenic parkway running all the way to Sangley Point—is noticeably less so.

Cherished landmarks such as the Army Navy Club and the Admiral Hotel are now gone, while gleaming new casino and condominium developments further south along the reclamation area present a marked contrast against the older sections of the boulevard.

For now, it remains a traffic-choked corridor for commuters heading to Cavite and points south.

Promenaders along the bay walk have gotten used to the smell of gas fumes and noise pollution from derestricted motorcycle exhaust pipes.

But hope springs eternal, and Christmas is nothing if not about hope.

For the first time in nearly 30 years, the CCP has revived the tradition of putting up a giant Christmas tree on its front lawn and hanging Christmas lanterns or parol along its facade.

Last Nov. 12 it unveiled a 50-foot-tall Christmas tree and a multitude of Christmas lanterns, each measuring eight feet in diameter, strung along the CCP’s facade. The lanterns were made by craftsmen from the city of San Fernando, Pampanga, where parol-making is a traditional art, in partnership with the CCP.

The display was illuminated by thousands of light bulbs, but not to worry, it uses energy-saving LED technology to minimize the display’s carbon footprint, thanks to sponsor Omni Electrical and LED Lighting Products, which stepped in this year to supply the new technology.

The lighting ceremony was accompanied by performances of the CCP’s resident artistic companies, including the Madrigal Singers, the Philippine Philharmonic Brass Ensemble and Philippine Ballet Theater. This time it was Manila Mayor Joseph Estrada who flicked on the switch.

“The first thing that the world leaders attending Apec will see upon arriving will be our Christmas tree and Christmas lanterns saying ‘welcome to the Philippines and Merry Christmas,’” said CCP vice president and artistic director Chris Millado in Filipino at the lighting ceremony.

During the Marcos era, the CCP Christmas display was Manila’s answer to Cubao’s elaborate and much-anticipated annual Christmas panorama put up by the Manila COD Department Store.

“Traditionally, we were always the first to light up on Roxas Boulevard,” said Ariel Yonzon of the CCP’s production and exhibitions department, the man in charge of putting up the Christmas display.

“The last Christmas display was in the tail end of the Marcos era,” he said, adding that the last year he remembered the CCP having a tree was 1985.

The CCP’s Christmas tradition disappeared after the Marcoses’ fall from power. (Its return this year didn’t seem to have anything to do with the reversal of fortune currently being enjoyed by the Marcos family, however.)

In 2011 the CCP partnered with the city of San Fernando, Pampanga, to create the Christmas lantern display that has since become part of its Christmas celebration.

“We’ve always wanted to have the tree back, but the cost has been prohibitive,” said Yonzon.

It was only with the entry of Omni as sponsor that reviving the Christmas tree tradition became feasible.

LED light bulbs are more expensive than the incandescent bulbs traditionally used for Christmas lights, but the costs are offset by energy savings and their long service life.

For instance, the bulbs used in the current display have an estimated life span of 120 months, said Yonzon. At a usage of five hours a day, the current set should last for 60 Christmases.

“There were times the economy was bad and there were discussions on whether or not the CCP should put up Christmas decorations,” recalled Yonzon.

“But we invested in that, and it lifted the spirits of the people who get to see it. For a little expense, you make the people happy.”

The celebration of the Christmas season has become an important part of the CCP’s calendar.

In 2005 it started holding the Misa de Gallo, the traditional dawn Masses, at the CCP ramp. This year the Misa de Aguinaldo will be held at the Main Theater, and will feature high Mass plus performances from CCP’s resident artistic companies.

“Maybe we can reinvent ourselves in the coming years and make Christmas more exciting,” said Yonzon. “How else can we get more people to come?”

It may just be wishful thinking to believe that the return of the CCP Christmas tree signals the renaissance of Roxas Boulevard. But then, Christmas is a time for wishing.