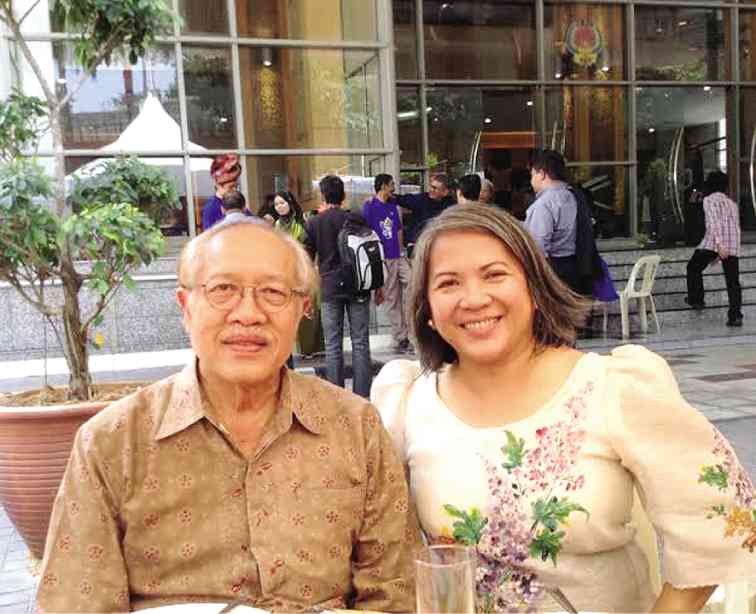 IT IS true how good fortune smiles even when one is down and being kicked. For a teacher like me making a countdown to “early separation” that Miriam College is bent on implementing in 2016 (regardless whether it is violating general-education teachers’ constitutional right to security of tenure), I remain very lucky.

Amid rain and traffic, I had the honor of joining international delegates in the Asean Literary Symposium organized by the Unyon ng mga Manunulat sa Pilipinas (Umpil) with the National Commission for Culture and the Arts (NCCA) at Ateneo de Manila University on August 26-28. I also attended the Asean Poets Forum (Pertemuan Penyair Asean) in Kuala Lumpur, Malaysia Sept. 4-5.

Umpil had invited scholars and writers from at least five countries to share their expertise and experience in the teaching and writing of their respective literatures: Melani Budianta from Indonesia, Nor Faridah Abdul Manaf from Malaysia, Trisilpa Boonkachorn from Thailand, Athithouthay Chatouphonexay from Laos, Loh Chin-ee from Singapore, and myself Budianta traced the widespread influence of women writers in Indonesia and how they had captured the imagination of contemporary young readers especially after the 1998 Reformasi era upon the end of Suharto’s term.

Manaf gave broad strokes of Malaysian literature and let us hear her own strong voice as a woman whose poet’s voice is unhampered by the veil.

Boonkachorn shared enchanting tales of Rama & Sita as Thai people would know in their own way apart from India’s.

Chatouphonexay showed the robust translations of the world’s classics in the language of his own people.

Loh read the kind of ruminations produced by poets of the city-state.

I decided to lead them into a glimpse of our own vast trove of literatures using the common experience of catastrophe, whether as a consequence of nature’s movement, or brought upon by human excess or neglect, and how from the stories of destruction we have managed to arise, and proved our creative will and more than resilient character.

We dined together, exchanged books, read poetry in our own languages, and sang together a song I learned from them in between banter with Malaysia and Indonesia on who originated, “Rasa Sayang,” which fell into the Last Song Sydrome I hummed in the succeeding mornings after the symposium.

The following week I was in Malaysia for the KL DiverseCity 2015 International Arts Festival, specifically for the Forum Penyair Asean and Deklamasi Puisi. I was the solo delegate from the Philippines, invited there as a result of earlier encounters years ago when I was younger, including a poetry reading in London’s School of Oriental and African Studies. That was 1997.

That was where I first met Thailand’s celebrated poet and revolutionary icon, Chiranan Pitpreecha, and Malaysia’s powerful performance poet Lim Swee Tin. All three of us have now received the Southeast Asia WRITE Award from Thailand.

At the Penyair Asean, we had a brief reunion. We also made new friends from writers of other countries such as Brunei, Myanmar (Burma), Vietnam, and Cambodia.

The Asean poets in the recital were all in top form, in colorful national costumes–they made such passionate rendition of their poems. The performances were widely attended by the public.

Keynote speaker was Muhammad Haji Salleh, National Poet Laureate of Malaysia, who quoted a Malaysian proverb that recognizes diversity, “Lain padang lain belalang” (Other meadows, other grasshoppers), not as a weakness but as a source of identity, and a right to be different, minus the prejudices that attend costly wars of nations. Our diversity as members of the Asean community are a cause for dialogue and reciprocity, and an opportunity to celebrate together. To each other we say, Mabuhay! and from them, I have learned to say, terimah kasih—every bit from the heart.

Rebecca T. Añonuevo is a poet, educator, translator, and the author of six collections of poetry in Filipino. She has won the Don Carlos Palanca Awards for Literature and National Book Awards.

In June 2016, Miriam College will enforce its early separation program (ESP) against her and 20 other General Education faculty, which the school administration says is “mandatory” to address the K-12 transition.

ESP has been the first and only recourse considered by the Miriam administration, despite several plans presented by the College Faculty Association, of which Añonuevo is president. Ironically, K-12 and changes in higher education curriculum are supposed to address the challenges and opportunities of Asean integration.