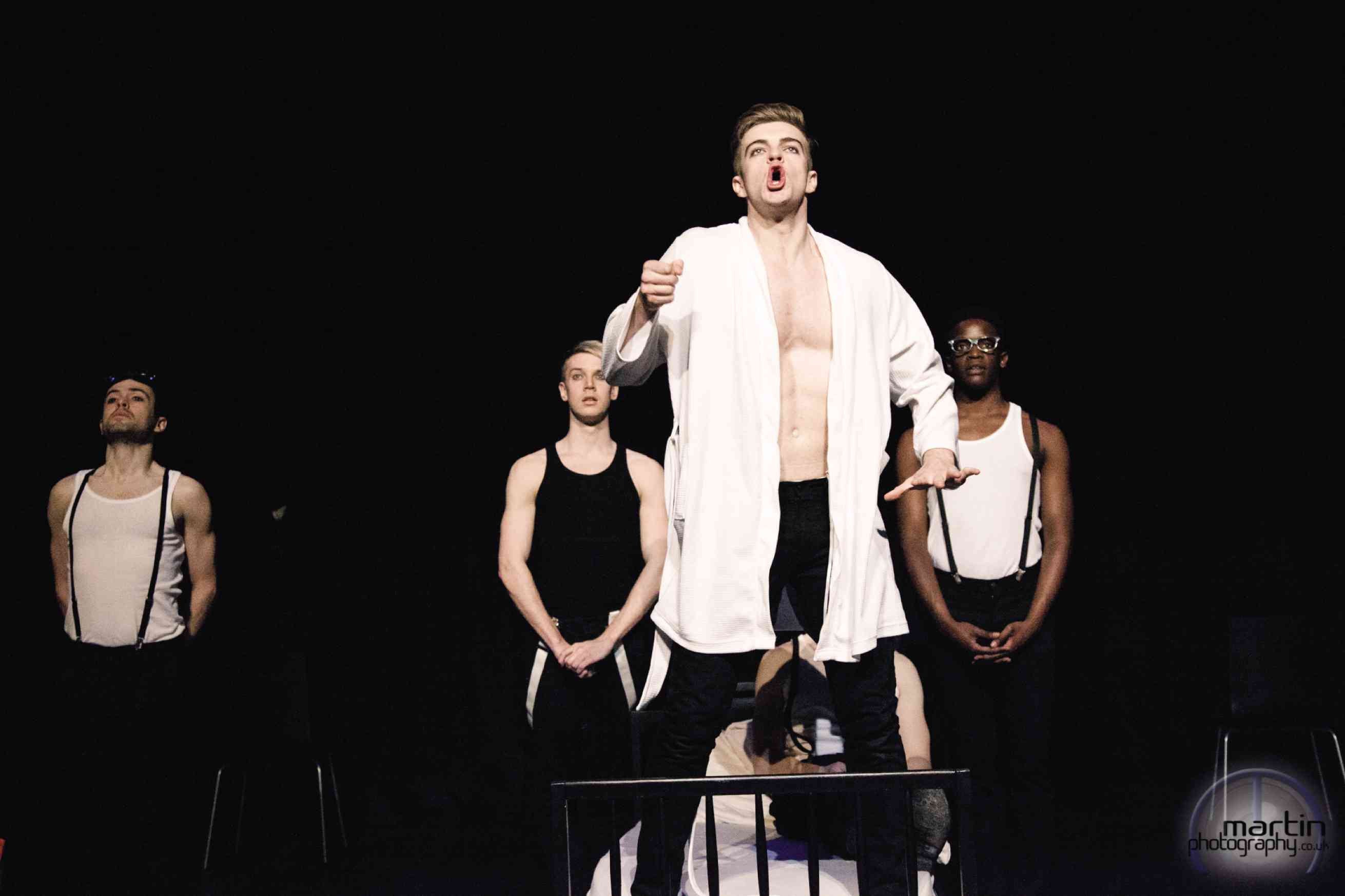 SINCE 2012, there has arisen a merry creative industry out of the 50th anniversary of the publication of British writer Anthony Burgess’ “A Clockwork Orange.” Published in 1962 and depicting a dystopian future of youth violence and state totalitarianism, the novel has gone on to become a milestone and a defining moment for Western culture.

If the recent run of the touring production of Action to the World’s “Anthony Burgess’s A Clockwork Orange” at Singapore’s Esplanade is any indication, the novel itself should be a defining moment for global popular culture as well.

At first blush, however, it seems jarring that a stage adaptation of “Clockwork” should be staged at all in Singapore. The city-state had banned the celebrated 1971 movie adaptation by Stanley Kubrick, lifting it only in 2011.

Since the prohibition, too, Singapore has grown into a model state of progress and stability—features otherwise lacking in Burgess’ portrait of Manchester, England, in the future ruled by street gangs and politicians trying to take the hard line on urban violence.

But amid the lingering euphoria of [email protected] (as the official celebration of the founding of Singapore in 1965 is named), “Clockwork” should serve up a horrible vision of the future that should comfort Asians about what makes the West wrong and the East right.

In any case, the horror that director-choreographer Alexandra Spencer Jones serves is musically mediated. It should suit up to the contemporary global vogue for touring musical narratives (“Mamma Mia!” and “Singing in the Rain”) and EDM. Burgess himself was a prolific composer, and this should explain the strong element of music in his narratives, such as Beethoven’s Ninth Symphony in “Clockwork.” In fact, he made a stage version with strong musical elements of the novel.

The original 1962 novel tells the story of the juvenile delinquent Alex and his “Droogs” on a wild campaign of mayhem and rampage that they call in their subculture patois as “ultra-violence.”

When Alex is arrested and allows himself to be subjected to the “Ludovico technique” to escape prolonged detention, he becomes a Pavlovian dog who abhors violence but himself becomes a prey to the violence of his former peers and victims. Worse, he becomes a pawn in the conflict between the establishment and the counter-establishment.

Removed from all of his natural moorings, he becomes a “clockwork orange,” a mechanical contraption masquerading as a man, subject to the forces of control, hate and violence.

The all-male ensemble takes on all of the key characters in the novel, including the women’s, so that the horror of the gang rape and the grandmother’s assault is lessened. It likewise provides the opening for the homoeroticism that Spencer-Jones insinuates is the overlying logic of the all-male street gang, something that was missing in Burgess’ novel but has emerged as a strong thesis in today’s ultra-academic penchant for critical theory or more appropriately, “queer,” studies. The eroticism becomes adult material in certain instances but Spencer-Jones provides it in a stylized, “safe” form through her choreography.

Jonno Davies is too old to play Alex, who’s 15 in the novel, but no actor in this era of children’s rights will be young enough to play Alex in any case. (Come to think of it, Malcolm McDowell was in his late 20’s when he appeared in Kubrick’s movie.)

But gifted with striking good looks, Olympian built and strong stage presence, Davies delivers a highly physical, effective and sustained performance. The rest of the cast, particularly Damien Hasson as the prison chaplain who opposes the Ludovico experiment, does likewise.

A queer or homoerotic version of a literary material with graphic violence should have unnerved Singapore, but the island-state has been trying to establish itself as a regional center for arts and culture. It has been mounting for instance the annual Singapore Writers Festival (SWF), now the leading gathering of writers in Asia. Incidentally, “Clockwork” had its run on the week of the SWF, and one of the festival’s many sessions featured Spencer-Jones talking about the play.

Still, there must have been some sense of dread greeting the production owing to the controversy in July 2014 when the Singapore National Library announced it would be pulping three children’s books in its shelves that had been discovered by alert parents to have LGBT (lesbian-gay-bisexual-transgender) themes. But when writers and artists protested, the library modified its decision and announced it would just put the books in the adult section.

A queer stage version of “Clockwork Orange” would not have been strange to Burgess who, even before giving to the world the eminent novelist but unsympathetic homosexual narrator said to have been inspired by W. Somerset Maugham in 1984’s “Earthly Powers,” actually had a bisexual hero intriguingly named Paul Hussey in “Honey for the Bears.”

Even more intriguing perhaps, Hussey’s a Briton who smuggles suitcases of trendy dresses from Cool Brittania to Cold-War Russia to sell in the black market of Leningrad.

Anyway, Burgess wrote “Honey” after “Clockwork,” which had been published in 1962, and both novels plundered his 1961 summer vacation in the Soviet Union. But even ahead of his vacation, the polyglot had been acquiring Russian language skills that he consolidated and put to excellent use when he invented the subculture dialect of Alex and the Droogs called “Nadsat,” a curious mix of British cockney and Russian derivatives.

Nadsat itself is the Russian suffix for “teen,” and it is a tribute to Burgess’ genius as a writer and polymath that he was able to predict today’s “teenspeak.”

But what Action to the World’s (AW) musical version of “Clockwork” may have missed is that Burgess devised Nadsat not as just any form of cute teenspeak or subculture vernacular, but as a moral on how language construction masks violence and disorder.

Audiences may derive amusement and fun at Alex describing the curious scene of “smecking malchicks doing the ultra-violent on a young ptitsa who was creeching away in her red krovvy, her platties all razrezzed real horrorshow”—except that what he’s really talking about is the gang rape of a young woman lying in her own pool of blood.

‘To the limit of queerness’

Burgess himself defined clockwork orange as “queer to the limit of queerness,” something with its essential nature missing.

Language denaturalized and decentered and reduced into a paltry matter of signifier and signified means meaning rendered arbitrary and vacuous. For Burgess, deconstruction and social engineering mean violence in the ambience of heteroglossia, totalitarianism in the guise of anarchy, LGBT labelling, Droog-like “jouissance” and “free choice.”

While generally praising Kubrick’s movie, Burgess worried about its violence.

The film was based on the American edition of the novel that removed the last chapter in which Alex, having been liberated from the state psychological control and surviving his suicide attempt, starts to think of actually growing up, of marrying and having a family.

Burgess later wrote his own stage adaptation that restored the last chapter, insisting that beyond the machinations of the state authority and counter-culture critics, the person has free will and the power to choose between good and evil.

But while AW’s production is titled “Anthony Burgess’s A Clockwork Orange,” and Spencer-Jones herself insists that they used Burgess’ play, the staging really owes to Kubrick’s cinema.

The slo-mo, balletic violence, the loud and harsh music, even the poses and the freezes of the actors that function as stage versions of the cinematic close-up and stop-motion—all this, including the queer ensemble acting in which men play women so that in the assaults, the violence is muted but is ultimately desensitizing to the audience and demeaning for the victims—constitutes a film language and an aesthetic of violence that degrades Burgess’ highly humanistic vision.

She expressed concern over the “possible cumulative effects of movie brutality,” and like media critic Neil Postman upholding Aldous Huxley’s dystopian vision of totalitarianism via the entertainment complex over George Orwell’s tendentious thesis of Big Brother, expressed concern that “night after night [of] atrocities [being] served up as entertainment” should be “worth some anxiety.”

“We become clockwork oranges if we accept all this pop culture without asking what’s in it,” declared Kael.

Moreover, to end the play without the novel’s key 21st chapter and epilogue and showing Alex going back to his old Droog ways betrays Burgess and his prophetic critique of postmodernism.

Michel Foucault’s carceral history claims that the 19th century dealt with lawlessness by shifting the emphasis of “discipline and punishment” from the body (torture and the guillotine) to the soul, constructing in the process delinquency and the criminal underclass. The delinquent Alex is thus subjected to the Ludovico technique so as to banish his anarchic instincts through “spiritual” or psychological shock treatment.

But in Burgess’ book, the counter-establishment like Foucault may be guilty of the same shock therapy, politicizing his victimhood and subjecting him to media sensationalism, which cause him to attempt suicide.

Both establishment and counter-establishment rob Alex of his free will. For Burgess, a lapsed Catholic, such is “gross heresy.” “The wish to diminish free will is, I should think, the sin against the Holy Ghost,” he said.

Parts of this essay have appeared as a spot review of the play in Coconuts Singapore.