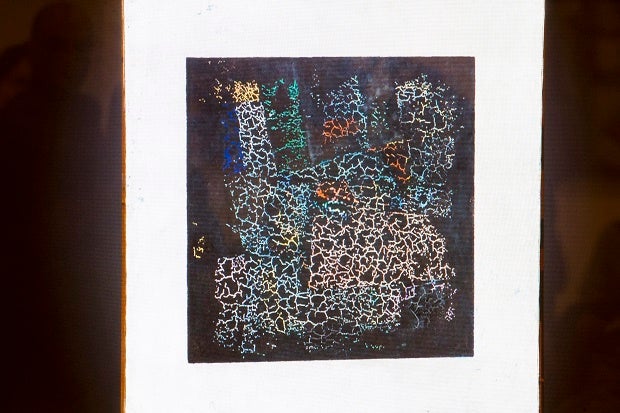 An earlier painting found under the black expanse of Kazimir Malevich's famed "Black Square" painting is shown on a screen at a news conference in Moscow, Russia, Wednesday, Nov. 18, 2015. To the naked eye, Kazimir Malevich's famed "Black Square" painting looks like just that -- a featureless black square. But X-ray examination by Moscow's Tretyakov Gallery found much more. AP

Two other paintings have been found under the black expanse, Tretyakov director Zelfira Tregulova told journalists.

There’s also an inscription by the artist around the white border of his painting that uses the title of a 19th century black square painting by the French humorist Alphonse Allais that purportedly portrays two black men fighting in a cave at night.

“The findings are important because they confirm that the creation of ‘Black Square,’ which was one of the most important artistic paintings of the 20th century, if not the most radical, was not spontaneous,” Tregulova said. “Rather it was a long, involved process.”

Until this discovery, art historians had largely believed that Malevich had hastily painted “Black Square.” But the X-rays show that the monochrome top-coat to “Black Square” covers two layers of colorful and intricate geometric shapes.

The Russian painter was a towering figure of the early 20th century avant-garde, famed for his so-called Suprematist paintings that rejected figurative art in favor of bold geometric shapes.