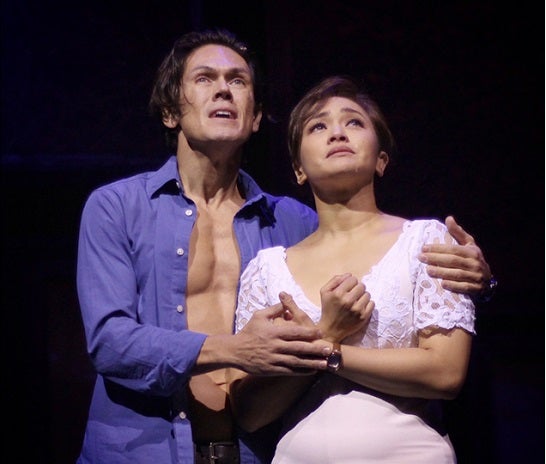 Fans of “The Bridges of Madison County”—either of the sentimental sinkhole that is Robert James Waller’s original novella, or of the 1995 Oscar-nominated film starring Clint Eastwood and Meryl Streep—may pick up a whiff of heresy in the musical adaptation directed by Bobby Garcia for Atlantis Theatrical Entertainment Group.

The lovers at the heart of the story—Italian war bride Francesca (Joanna Ampil) and photographer Robert (Mig Ayesa)—now appear awfully young. It may look like a trifle, but this slight change in detail is actually a game-changer as far as character dynamics are concerned.

Understand that what comprises much of the appeal of the novel and film is the depiction of forbidden middle-aged love. Francesca is a bored housewife living what appears to be the perfect life in the American flatlands. Then, just as her husband and kids are away at the state fair, a mysterious free spirit comes swooping in, and suddenly the possibilities, in a place that runs on routine, are once again infinite.

Robert is 52 years old in the book; Streep was already well into her 40s while Eastwood had just breached his 60s when they did the film. Imagine if Francesca and Robert had been any younger—the excitement would have simply fizzled out, the story reduced to being your typical love affair, just another account of youthful foolishness.

By situating the story in that patch of time where people are supposed to have long found “the one,” settled down, devoted to raising a family and keeping it intact, “Bridges” coats its tale of adultery with a novel sheen, something to pique the viewer’s curiosity. Imagine if these people were your parents!

In the case of the current Atlantis production (running until Dec. 6 at the Carlos P. Romulo Auditorium, RCBC Plaza), it’s not entirely clear if the considerably fervid youthful glow emanating from the leads is only a matter of casting, or something specifically stipulated in the musical’s script. (The book is by Marsha Norman, the Tony Award-winning score by Jason Robert Brown.)

Still, it seems rather imprudent to raise such complaints when you’ve got a show as visually stunning and emotionally searing as the one Garcia has put on. Rest assured that while the love affair now treads more along the path paved by restless thirty-somethings, the heartbreak is no less real and visceral.

That’s largely because of Ampil, who brings both weight and lightness, sadness and rapture to Francesca, even as she works with an unconvincing Italian-American accent. In her hands, the role becomes a showcase of alternating stale resignation and newfound ecstasy; and the songs, through a voice of immeasurable luster, become occasions for exquisite, breathtaking imagery.

Robert, as portrayed by Ayesa, becomes sort of a manic pixie boy dream with the body of an Olympian god. It’s this swagger and manly appeal that fueled his interpretation of the rock star Stacee Jaxx in Atlantis’ “Rock of Ages”; here in “Bridges,” those traits lift the character off the ground, and Robert the earthy photographer is now a dreamboat with a penchant for balladry.

You can clearly see why Ampil’s Francesca would invite him into her house and eventually jump into bed with him when the opportunity finally presented itself.

Elegant musicality aside, it’s also how the world of this “Bridges” is conjured that makes it such a beauty, via Faust Peneyra’s set, Jonjon Villareal’s lights and Garcia’s splendid direction.

What Peneyra has achieved here is not just spectacle, but a sweeping grasp of past and present. By converting the proscenium of the Carlos P. Romulo Auditorium into a magnificent gilded frame, by depicting the stark Iowa landscape through rectangular snapshots hanging on all three walls of the stage, “Bridges” becomes a memory that refuses to stay buried beneath earth and dust.

It is a photograph that has weathered time, granted distinct tones by Villareal’s transformative lighting: blood red for overwhelming love; deep blue for the hurtful past; and so on.

It is this moving picture that Garcia directs with clockwork fluidity. Everything falls neatly into place at the perfect time—the movements precise and meaningful, from the way the actors are blocked to how some of Peneyra’s frames are flipped to become props or present-day articles, all the way to the tiniest shade of light and angle of limbs.

The production, in fact, owes its best moments to the tableaus Garcia has crafted out of Francesca’s mirror autobiographical numbers—the opening “To Build a Home,” which tells of how she came to settle in America; and “Almost Real,” a delicately morose recollection of her life back in Italy.

With the ensemble sitting on the fringes of the stage (a concept first used by the original Broadway production), it’s no longer just the audience who are witnesses to the story and the sweet infidelities it harbors. And these people surprisingly feel organic, and not just like glorified roles.

In particular, Nino Alejandro (of “The Voice of the Philippines” fame) leaves an indelible presence as Francesca’s husband, while Emeline Celis-Guinid is an unexpected comic delight as her snooty neighbor.

Despite the mushy, turbulent nature of its central idea, “Bridges” remains by and large a work of admirable subtlety, and that is Garcia’s most remarkable achievement. The romance is mostly kept just beneath the surface, the feelings restrained, and thus, truthful.

Suffice to say, if you’re looking for a show where the Filipino concept of “kilig” reigns supreme, then this is the last thing you’d like to check out. Not much in the way of the obvious dots this production; most of the time, it pulls back, so that in the few instances that it openly pours its heart out, the payoff hits pretty hard.

In a relatively weak year for local musical theater, Garcia and Ampil have given us quite a gem. The staging of this “Bridges” is nothing short of accomplished, and its leading lady, a beacon of emotional clarity.

E-mail the author at [email protected], visit him at www.vincengregorii.blogspot.com, or follow him on Twitter at twitter.com/vincengyu.