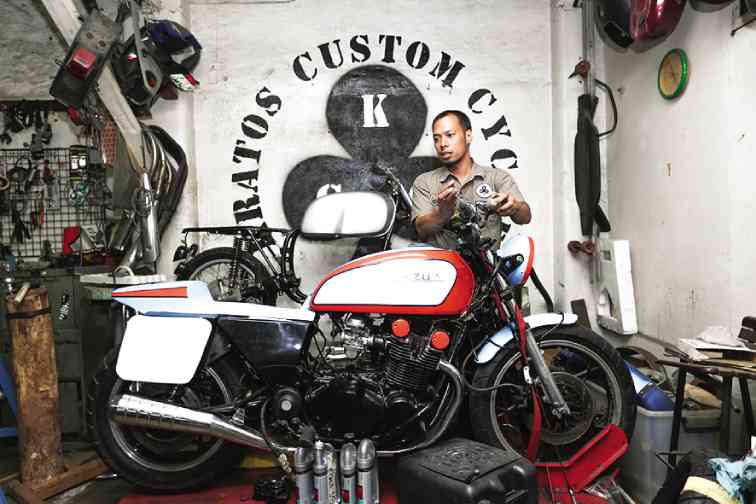 The hipster chariot du jour is the café racer, a low-slung, stripped-down speed machine that exudes a vintage vibe and the ineffable, Steve McQueen-like air of cool toughness (or tough coolness) that every man-boy aspires to.

The term “café racer” comes from the British biker scene of the 1950s and ’60s, when motorcycle enthusiasts would race their stripped-down Triumphs, Nortons or BSAs from one motorway café hangout to another.

The basic attributes of the true café racer were defined early on: the elongated tank, the low-slung handlebars, the minimalist seat—all designed to place the rider in a racer’s crouch on the bike. Anything not essential to the bike’s purpose was stripped away, leaving a naked, streamlined crotch rocket that looked fast even when parked outside the pub.

Café racers have fallen in and out of fashion over the decades, but they’ve always been cool. Today, café racer enthusiasts can be found in nearly every country in the world, including the Philippines.

The café racer purist insists that his machine be “built, not bought,” and the best examples are invariably custom jobs, judged by the amount of individual styling the owner puts into it rather than the size of the down payment he gives to the dealers.

Many are labors of love, broken-down machines from the ’70s or ’80s rescued from the junkyard, and brought back to life through insane amounts of time and money spent scouring the planet for rare, out-of-date parts, and fabricating custom one-of-a-kind components.

Yes, it’s a motorcycle, but it’s also a design object, a rolling work of art emblematic of the owner’s personality, a signifier of his dreams, desires, value-system and world-view.

In short it’s the perfect, if not the most practical, post-modern ride.

Lucero hits the hipster trifecta: a musician, he’s played with his band Imago for the past 18 years; a former FM radio DJ, he now runs Radio Republic (www.radiorepublic.ph), a local music website; a motorcycle enthusiast, he rides several bikes, including a customized BMW R9T café racer.

Unlike other motorcycle circles that value exclusivity, Lucero says the local café racer scene is a more democratic space that welcomes anyone with an appreciation for custom machines, whether it be a P1.2 million piece of German engineering or a broken-down Honda cub repurposed from pan de sal delivery duties.

“The important thing is that you express yourself with the bike,” he says. “What you’re looking for is that sense of individuality that you were able to bring out by working on the bike.”

Lucero himself also rides an extensively customized Bajaj Boxer—a cheapo bike designed for tricycle duty—and gets nearly as much enjoyment from it as from his BMW.

P75 a week on gasoline

In fact, the café racer scene is only the most visible tip of a larger scene, dubbed “kustom culture” for want of a better term.

“The great thing about the scene is, lumalabas ang mga closet artists,” says Lucero, an industrial design major who likes to work on his bikes himself. “That’s also why a lot of musicians and visual artists get into it.”

The local café racer scene has been bubbling underground for several years now, says Lucero, with active pockets of enthusiasts in Luzon, Visayas and Mindanao. Thanks to the Internet and social media, these scattered cliques have now been unified into a national scene, with its own events.

One of the winners was café racer specialist Todee Teodoro, owner and chief builder of Kratos Custom Cycles, who walked away with trophies in two categories.

Belonging to the family behind the venerable Ang Tibay shoe brand, Teodoro has managed to translate Ang Tibay’s old-school values of solid craftsmanship and classic design to building custom motorcycles. In fact, Kratos is housed in the same Makati building where Ang Tibay shoes were once made, until the factory finally closed its doors in the early 2000s.

Café racers have been around for a while, he says, but until recently it was an underground phenomenon. Thanks to the Internet, however, it’s become almost mainstream. There are several local web sites and Facebook pages devoted to the local kustom culture scene.

Motorcycle companies have capitalized on café racers’ “cool” image to market their bikes. Most motorcycle companies now have a retro-inspired model or two among their offerings. Royal Enfield has even come out with an off-the-peg café racer, which is kind of a contradiction since customization and personalization are the essence of café racers.

“The café racer scene is more of a community,” says Teodoro. “It’s really a culture. The bikes become secondary to the camaraderie. The scene itself is neutral. It’s not exclusive. Whether you’re an artist or a congressman or whatever, as long as you ride and appreciate old nostalgic motorcycles, magkakasundo tayo.”

Teodoro, who has been riding motorcycles since he was in high school, admits that café racers are often more form than function.

“These bikes are nice for the city, but for long rides, you have to be really hard core to ride a café racer any distance,” he says. “It’s more like a rolling piece of art. It’s mobile sculpture. It’s not just a ride—it’s a representation of the owner.”

Teodoro had wanted to be an architect, but instead he dropped out of computer school to focus on building bikes full time. He soon built a reputation for clean, elegant design which drew a loyal clientele, including such celebrity bikers as Ryan Agoncillo, Jericho Rosales, Dingdong Dantes and Drew Arellano. He is currently building one for Coco Martin’s next teleserye.

More important than scoring hipster points, however, Teodoro sees the emergence of café racer culture as an opportunity for local custom builders to shine.

“There’s a brotherhood and friendship among builders,” he says, citing such old-school customizers as Laguna Choppers out of San Pablo City and the Malapitan Brothers.

“We help each other out in sourcing hard-to-find parts,” he points out. “If a client wants a bike that’s not my forte, I refer him to someone who specializes in building that kind of bike.”

It’s not all about style, however. Teodoro says builders have to pay as much attention to the engineering of the bike.

“I’m an aggressive rider on the street,” he admits, “so I know how much stress a bike takes. We try to put value in the bikes we build. In the end, it’s also the shop and the reputation of the builder behind the bike which will retain its value.”