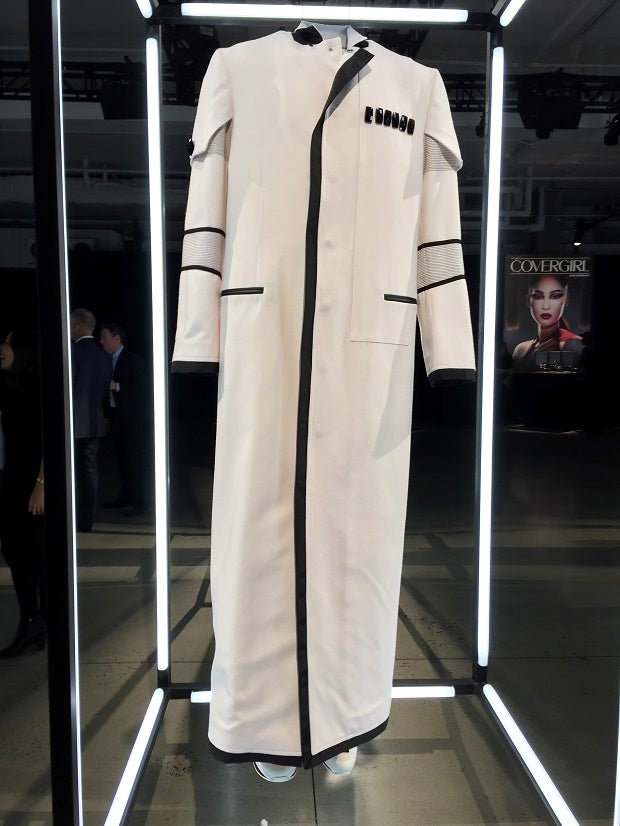 A floor-length boxy white coat with black trim designed by Ovadia & Sons, inspired by the film, "Star Wars: The Force Awakens," is displayed at a gallery on Wednesday, Dec. 2, 2015, in New York. Fashion designers created outfits that pays homage to characters from the film as part of the "Force 4 Fashion," initiative. The outfits will be auctioned off with proceeds going to the Child Mind Institute. (AP Photo/Jocelyn Noveck)

NEW YORK — Chewbacca never had it so good.

The ultra-hairy “Star Wars” character isn’t known for his fashion sensibility, but he was the inspiration for not one but two highly furry ensembles displayed Tuesday by designers indulging their inner “Star Wars” geekdom with new looks — to be auctioned off for charity — as fans hotly await the seventh installment later this month, “Star Wars: The Force Awakens.”

The dozen or so garments in the “Force 4 Fashion” collection — by the likes of Diane von Furstenberg, Rag & Bone and Opening Ceremony — were based mainly on new characters in the latest film, but also a few veterans. Most recognizable were the stormtrooper ensembles created by Ovadia & Sons, which presented a floor-length boxy white coat with black trim, and by Opening Ceremony, which displayed a more tightly tailored look — well, for a stormtrooper — in white microsuede.

As for Chewie, he (or it?) inspired a luscious merino shearling coat by Billy Reid, lined with brown leather and paired with a white turtleneck sweater and gray wool track pants. The creature was also embodied in a furry Todd Snyder ensemble, pairing a brown coat with white top and tan pants.

There was some definite gender-bending happening, particularly with Halston. The label’s designer, Maria Mazelis, decided to give the male Kylo Ren (played by Adam Driver) a female identity, probably because, well, gowns are a lot more glamorous than menswear.

“I was really excited by the idea of a villain,” Mazelis said, standing alongside her sleek dark gown, with a plunging neckline, sheer back and revealing side slits, topped off with a beaded mask that covers the eyes. “The complexity of this character was intriguing. It’s powerful, but emotional too. Strong and yet vulnerable. I wanted to show that duality.”

And Cynthia Rowley gave a human character to the droid BB-8, putting the character in a white pants, a sweatshirt with a big ‘8’ on it, and a round football-style helmet.

Disney and Bloomingdale’s are partnering for the fundraising initiative; proceeds from the auction will go to the Child Mind Institute. (There are, as yet, no plans to recreate the pieces for sale.) A separate auction will feature a custom, bejeweled BB-8 created by Kay Jewelers, weighing more than one and a half pounds and made of gold and diamonds. Proceeds from that auction will go to St. Jude’s Children’s Research Hospital, a representative said, noting that the piece had been appraised at $135,000.

Though a number of the designers are said to be big “Star Wars” fans, Mazelis was thinking of her kids, ages 4 and 6, whom she called “superfans.” Will her design earn her some points with them?

“One day they will appreciate it,” she replied hopefully.

Can ‘The Force Awakens’ become the biggest movie ever?