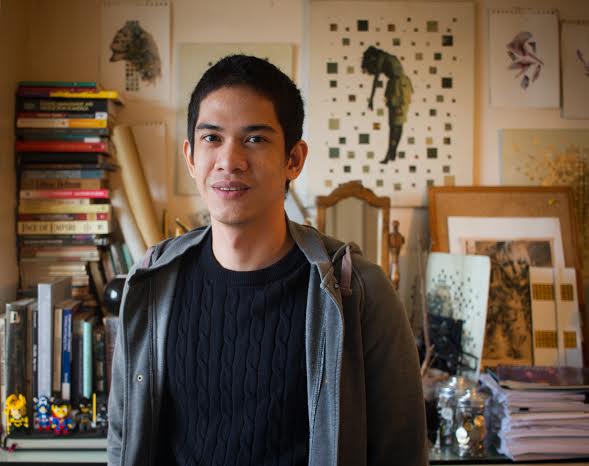 Director Ed Lacson Jr.: “I always look for believability. In plays such as ‘Maria’ and ‘Games,’ the audience has to lose themselves in the actors’ laughter, tears and anger. There shouldn’t be pretenses.” PHOTOS FROM ED LACSON JR.

Two “children’s plays for adults”—“Si Maria Isabella at ang Guryon ng mga Tala,” written by Eljay Castro Deldoc, a crowd favorite at this year’s Virgin Labfest at the Cultural Center of the Philippines (CCP); and “Games People Play,” written by Glenn Sevilla Mas, which had sold-out shows last year in Ateneo”—are being restaged as a twin bill offering by Bit by Bit Company this Dec. 12-13 and 19-20.

The shows, at Power Mac Spotlight in Circuit Makati with 3 p.m. and 8 p.m. performances, deal with childhood memories, coming of age and growing up—powerful stories that have left the audience weeping and thinking after watching, says director Ed Lacson Jr.

“Maria Isabella at ang Guryon ng mga Tala” is a Filipino adaptation of the story “The Kite of Stars,” by author and Palanca winner Dean Francis Alfar. It is the story of Maria Isabella (Krystle Valentino), a 16-year-old girl who goes on a quest to make a giant kite that would take her to the stars; she believes that the only way the love of her life, Lorenzo Salvatore, would see her is when he opens his eyes to gaze at the stars. Maria Isabella gathers materials for her kite for 60 years, accompanied by a loyal butcher boy (Rafael Tibayan) who is secretly in love with her.

Employing a simple stage design and traditional Filipino costumes, Lacson presents this rich, colorful fable through puppets, shadow play and the strains of a classical guitar. The 55-minute drama ends on a bittersweet note.

Alfar, who watched on the last day, “was crying until the curtain call!” Lacson recalls. “Eljay and I were so conscious watching him as he watched the play, because it’s his work. We were so relieved that he liked it.”

“Games People Play,” meanwhile, was first staged by Lacson at the University of the Philippines for his Theater Arts masters’ directing finals, before it had a run and a sold-out repeat at the Ateneo de Manila University, and later on in arts festivals such as Sipat Lawin’s Karnabal and CCP’s MNL X.

The Palanca-winning play is written in English with touches of Ilonggo and Kiniray-a. It makes use of Pinoy games such “bahay-bahayan” and “pitik-bulag” to introduce three characters: Julio (Abner Delina), a boy confused about his growing sexual impulses; Luna (Thea Yrastorza), a girl with a drunk dad and an overly religious mom; and Diego (JC Santos), a street-smart toughie dealing with neglect and abandonment at home.

To create magic and dark fantasy in this tale of tangled memories and indelible childhood experiences, Lacson showed scenes through cardboard cutouts of forest trees, a church and a castle.

“It is a complex play presented in a straight narrative without villains, big moments or grand scenes,” he says. “It is introspective. The characters see each other after a long time, and realize they are no longer the same people they knew; they rediscover their childhood and, suddenly, it all makes sense.”

The venue for the twin bill, Power Mac Spotlight at Circuit Makati, seats 300 people and is a fitting venue for small plays, says Lacson, who is also the theater’s manager.

As a director, he admits to being “meticulous.” Now 31, Lacson has worked as an actor in collegiate theater, and was the longest-serving stage manager for the Virgin Labfest before he ventured into directing and set design. His production of “Middle Finger” for Tanghalang Ateneo was among the most acclaimed plays of 2014; his set design for Red Turnip Theater’s “33 Variations” early this year also garnered praise.

When he directs, “I always look for believability,” he says. “In plays such as ‘Maria’ and ‘Games,’ the audience has to lose themselves in the actors’ laughter, tears and anger. There shouldn’t be pretenses.

“The challenge is keeping it fresh for people who are watching these tried and tested children’s plays for adults for the first time.”