Too much mystery, too little magic in this ‘Secret Garden’ | Inquirer Lifestyle ❮ ❯ 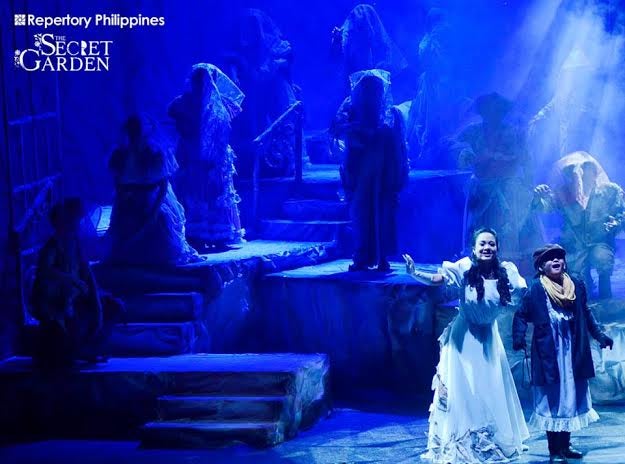 Too much mystery, too little magic in this ‘Secret Garden’

The one thing that makes a secret compelling is its revelation. The curious spirit in us will always want to know what lurks behind the door, especially if plenty enough teases along the way are made that makes the wait both enticing and excruciating.

Place the mystery within the parameters of a feel-good children’s tale—as opposed to a horror movie or murder mystery, for example—and the expectant payoff, once the mystery is revealed, should be a combination of something wondrous and joyous. Any other ending would be a letdown. The audience expects magic once that door cracks open.

Mary Lennox, the feisty child at the heart of the story in “The Secret Garden”—Frances Hodgson Burnett’s classic novel about lost loves and a childhood regained—is the perfect character to lure us into that kind of journey. Watching her defy her Uncle Archibald and roam the isolated corridors of his gloomy home in the current Repertory Philippines musical production directed by Anton Juan, it is easy to forget that this stubbornness was quite unheard of in a repressed England of a few centuries ago.

British formality and love of order and putting things in their proper place consigned children, even those raised by loving parents, to secluded rooms before they were packed off to boarding school. They were told instructions and were never listened to. Obligation, and not affection, was the undercurrent of most relationships.

Lyricist and librettist Marsha Mason and composer Lucy Simon lay this foundation from the beginning. As the play progresses, their music becomes the channel by which the characters eventually open their hearts and connect with the audience.

Mary, played with a mixture of sulking obstinacy and prickly charm by Ashlee Factor (with Ginger Karganilla alternating) in this production, has the gumption and the heart to break the rules. Juan capitalizes on Mary’s foreign origins—she was born and raised in an British-colonized India where her affluent parents died of cholera—as one explanation for her free spirit and ability to see through walls, whether they be physical barriers or emotional defenses.

Mary shakes the world of her relatives: her hunchback uncle Archibald (Lorenz Martinez, with Robbie Guevara alternating), who still mourns for his beloved wife Lily (Caisa Borromeo, alternating with Myramae Meneses) through 10 years of self-imposed solitude; her crippled cousin and Archie’s son, Colin (Noel Comla—also played by Daniel Drilon and Albert Silos), literally locked away in another room to ostensibly help him recover from an illness; and Archie’s hardened brother Neville (Noel Rayos), a physician whose motivations in helping his family may be more complex than plain sibling loyalty.

It’s bleak throughout; Juan tries to counter the typical British chill with Indian mystique, but even the occasional dances the ensemble breaks into (the choreography is by Dexter Santos) fail to light up scenes, even when the script appears to call for it. This odd result makes the more poignant numbers work powerfully, such as Archie and Neville’s soaring duet, “Lily’s Eyes”—but the more optimistic musical pieces just tend to fall flat.

Another thing that saddles the transition from darkness to light—remember, this is a quest for a secret garden that would lead to everyone’s spiritual and emotional rejuvenation—is the discordant way the characters move throughout the stage. Conflicting cultures clash, ghosts from the past haunt the people of the present, flashbacks materialize to layer into current events—but the blocking is sometimes haphazard that the audience is left to figure out what is going on.

By the time the message reaches them, the moment is over, and the bridge that should have transpired between performers and viewers to keep the latter at least engaged, if not enraptured, is lost.

The ensemble tries valiantly to rise from this sea of darkness, and it is a testament to their skills that they manage to do so. Martinez plays Archie more humanely, making his eventual reconciliation with his son and niece more credible, given their flimsy stage time together. Rayos could easily have made his villainous doctor a conniving stereotype, but his anguish at always being second best (whether as Lily’s suitor or as heir in the Craven clan) makes his plight relatable. Borromeo does what she can with a Lily whose warm heart and compassionate soul are obscured by the glacial atmosphere.

The two performers who manage to break through this ice-cold environment and make the audience laugh and jaunt with them are Red Concepcion’s Dickon and Comia’s Colin. Concepcion’s bright-eyed commoner brings a giddy sense of play into the whole thing, while Comia’s Colin is every inch a flesh-and-blood boy—bratty at times, cute and cuddly the next, his own fiery personality not dampened a bit by all those years in virtual childhood imprisonment.

If only his flame, as well as those of the other actors, were enough to make the magic of this “Secret Garden” truly blaze. The door does open at the end, but, moving reunions aside, there isn’t enough seen on stage for the audience to truly rejoice with the characters.

Perhaps Juan wanted to leave everything in the minds of the viewer and let them create magic with their own imagination. Unfortunately, this show’s monotonous bleakness is more the audience’s takeaway, instead of the wonder and uplift at the heart of that hidden garden.