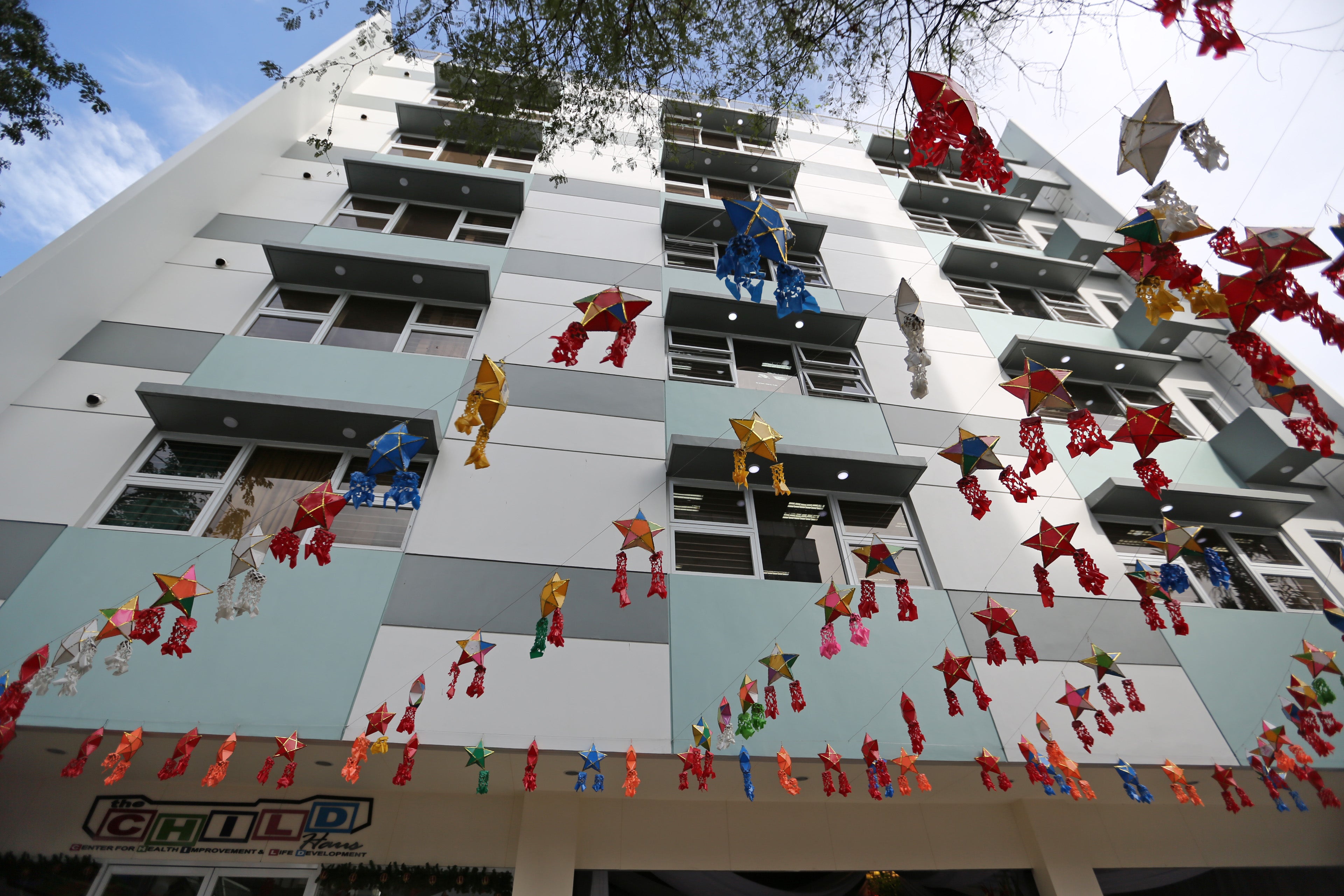 THE SEVEN-STORY Child Haus in Paco,Manila, is festooned with Christmas decor during its inauguration on Sunday. The center shelters children with cancer from out of town undergoing treatment at the Philippine General Hospital, a 5-minute walk away. RAFFY LERMA

Hans Sy was watching television one night in 2010 when he chanced upon news footage showing Ricky Reyes, the high-profile beauty business mogul, crying over an eviction letter issued by a newly appointed Malacañang official.

Reyes had by then already invested seven years into a project called Child Haus, or the Center for Health Improvement and Life Development, a temporary shelter for indigent children suffering from cancer.

Child Haus was operating in a decrepit building inside the Quezon Institute that had been refurbished with the help of some of Reyes’ friends in the Arroyo administration. The center was hosting some 200 sick children, each one accompanied by a parent or guardian.

Reyes said he started the nonprofit initiative as his way of paying forward, or passing on to others his good fortune and the success that he has achieved in the beauty business.

The unnamed Palace functionary insisted that Child Haus was a project of former President Gloria Macapagal-Arroyo, and asked Reyes and the sick children to leave.

Reyes had to find temporary quarters in a rented house for the sick children, who came from as far as Kalinga-Apayao in the extreme north and Sultan Kudarat down south, and the adults taking care of them.

Sy was touched by what he saw that night.

“I told myself, ‘these are children with cancer. They don’t even understand why they are sick,’” he said in an interview.

The reticent businessman, one of the heirs to the SM billion-peso fortune, wasted no time in calling Reyes to ask how he could help.

Reyes admitted to being surprised when Sy called. He said he was actually closer to Sy’s father, Henry Sy Sr., who built the formidable SM retail, real estate, property development and banking empire from the modest Shoemart shoe store.

Reyes asked Sy whether Banco de Oro, the bank that belongs to the SM Group, had a foreclosed property somewhere that could be converted into another temporary shelter for the children. But Sy had other plans.

Nine months later, Child Haus transferred to a seven-bedroom bungalow on Mapang-akit Street in Quezon City that Sy had purchased.

Sy would often come to visit the children. On one such occasion, the businessman observed that the bungalow was becoming rather cramped for the 40 or so children living there.

“They were squeezed together. Poor kids. That was just a house so I decided to build something,” he said.

Last year, Sy celebrated his birthday with the kids at Child Haus.

Reyes noticed that during the celebration, one of Sy’s friends brought an easel up the stage.

“I thought it might be a picture of his father, Henry. It turned out to be the plan for the construction of a brand-new home for Child Haus,” he said.

The new Child Haus address is in Paco, Manila, a five-minute walk from the Philippine General Hospital (PGH) where the children, at least those who could be accommodated, are undergoing chemotherapy.

The spanking new, seven-story white-and-gray building sits on a property formerly owned by Mercedes Rivera. An old house with Japanese-style architecture used to stand on the 380-square-meter lot.

It took a while to convince the owner to sell. Construction of the seven-story building finally began in January and was completed in November.

The new Child Haus has three dormitories with double-deck beds for the children and their adult companions, a chapel, a social hall, an entertainment center, a dining area, an outdoor playground at the penthouse and its own water filtration facility.

“I ‘held up’ so many friends to make this come true,” Reyes joked. The list of donors includes names from political and business circles.

According to Reyes, social workers from 11 government hospitals, including the PGH, Jose Reyes Memorial Medical Center and the National Orthopedic Hospital, refer their cancer-stricken child patients to Child Haus for a place to stay in Metro Manila while completing their treatment instead of having to shuttle back and forth between the capital and their provincial hometowns.

Eight-year-old Tricia Lyn Cahayagan, who has leukemia, had to endure three to four hours of travel, using various forms of public transportation, from Bulacan to PGH twice a month for her chemotherapy sessions.

Returning to Bulacan during rush hour meant Tricia and her grandmother, Imelda Arnella, would arrive home very late at night.

Two other children with leukemia—Christian Sabate, 12, and John Arbie Insorio, 15—also undergo the ordeal of chemotherapy and rush-hour commuting from Carmona, Cavite, and Biñan, Laguna, respectively.

“I will share with you a secret,” Sy told the guests during the blessing of the building by Franciscan priest Fr. Anthony Dumabok on the first Sunday of Advent.

“Every birthday, I always surprise myself with a gift. A watch, a painting. Something fairly expensive. I thought, I am turning 60 (Sy turned 60 last September), I should do something different, something I really love. As I said, when I saw Ricky (crying) on TV, it really touched me. These children do not even understand why they are sick,” he explained.

“Seeing these children fight has given me strength. I realize I have so many blessings so I might as well share my blessings with them,” Sy added.

The businessman said Child Haus “is not only my project, it is everyone’s project starting with my mother (Felicidad) who gave me guidance, Mother Ricky (Reyes) who started this whole thing, and my family who gave me strength to do this.”

Sy also did not forget his unnamed friends who chipped in to make the new Child Haus building a reality.

“To my friends who gave support, you know what the word means. I think I’ve learned from Ricky,” he joked.

New Child Haus waits for kids with cancer, thanks to Hans