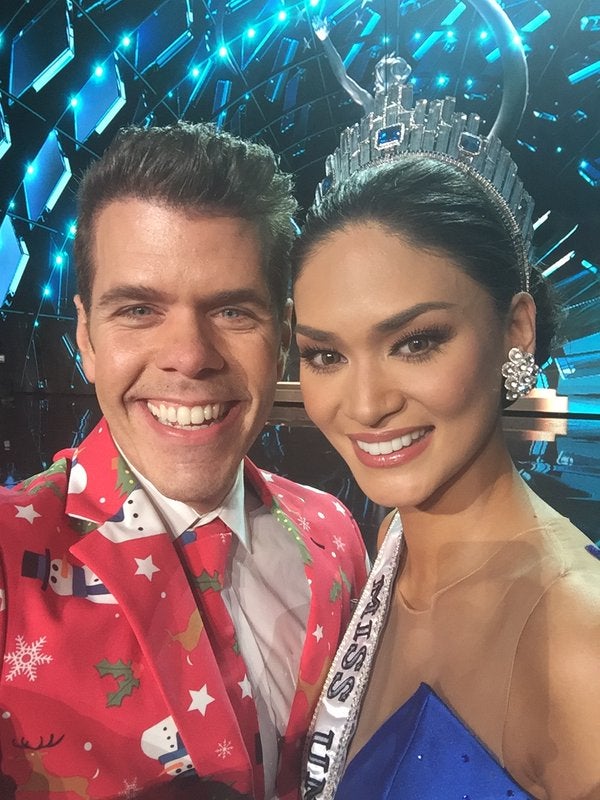 Hollywood gossip blogger Perez Hilton, who served as one of the judges in the 2015 Miss Universe, has broken his silence on the controversy which has plagued the annual pageant.

Perez on Tuesday (Monday, US time) said that he refused interviews so that he would be able to talk about the contest in his podcast hosted on his own website. In the podcast, he compared Miss Universe Pia Wurtzbach with first runner-up Ariadna Gutierrez of Colombia, saying that the Filipina delegate deserved the title unlike the latter.

“Miss Colombia was the most beautiful contestant, but I don’t think she deserves to win the title, and she didn’t win the title for a variety of reasons,” Hilton told his co-host Chris Booker.

He explained that while Gutierrez was considered as among the frontrunners, Wurtzbach surprised him during the competition.

“She really surprised me. I wasn’t expecting her to be fierce and fabulous,” the blogger said about the Filipina beauty during the swimsuit round.

He also revealed that he liked Colombia’s performance in the evening gown competition better.

The outspoken blogger, however, called out Gutierrez for her snarky attitude during the question and answer portion.

“I don’t know if the people at home could see this. But Miss Colombia was being straight-out diva-bitch rude to her translator…She was giving the most awful side-eye, throwing major shade because Colombia was not happy with the pace or the way the translator was translating…I was dying. She’s being cunty right now,” he said.

“It was a major turnoff,” he said of Colombia’s attitude.

READ: Miss Germany rips Pia Wurtzbach: ‘None of us voted for Philippines’

During the final round of the competition, finalists Philippines, Colombia and Miss USA Olivia Jordan were asked why they should win Miss Universe.

Wurtzbach answered, “To be a Miss Universe is both an honor and a responsibility. If I were to be Miss Universe, I will use my voice to influence the youth and I will raise awareness to certain causes like HIV awareness that is timely and relevant to my country, which is the Philippines. I want to show the world, the universe, rather, that I am confidently beautiful with a heart.”

Hilton said he was impressed by Wurtzbach’s performance in both question and answer portions.

“It was the second time that she (Pia) gave a great answer, actually a better answer, and by that point, I felt like wow, she really brought her A-game, was super competitive, but also like, she deserved it. Like she deserves it. To me, there’s a real beauty, and grace, and elegance (in Pia). She is Miss Universe.”

He then proceeded to compare Gutierrez to her fellow Colombian, Hollywood actress Sofia Vergara.

He said that up until the last round, he was not sure whom he was going to select as Miss Universe.

Aside from Hilton, the other judges were former Miss Universe Olivia Culpo; actress-comedian Niecy Nash; and former American football player Emmitt Smith. The global audience and the 77 eliminated contestants were also asked to vote during different segments of the competition.

With their votes unanimous, he said he and the other judges were surprised when host Steve Harvey announced that it was Colombia who won and not the Philippines.

“My initial thought when Steve Harvey announced that Colombia won was ‘this is rigged,’” Hilton said.

He later backtracked, saying that he thought the mix-up was just a publicity stunt for more people to talk about the pageant.

“I still find it hard that he could have messed up that badly,” Hilton continued.

The media personality closed the podcast by saying that amid the gaffe and that furor it had caused, it was important to know that the Philippine delegate won the competition “fair and square.”

“It’s important to know that Miss Philippines won it fair and square. All of the judges thought so. She deserved to win. It’s not just a physical beauty contest,” he said.

He said that he, however, believes that Gutierrez would have a successful career after the competition.

“I think that she could have a more successful career after Miss Universe than Miss Philippines will,” the gossip blogger said.