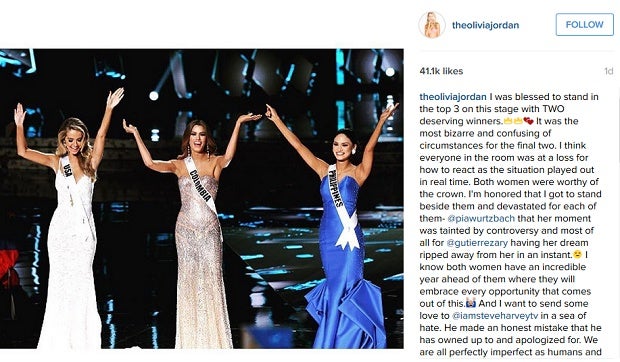 Miss USA: Both Miss Philippines and Miss Colombia were worthy of crown

Both Miss Philippines and Miss Colombia were “worthy of the crown.”

Such was the sentiment of Miss USA Olivia Jordan after the pageant host, Steve Harvey, mixed up the results of Miss Universe 2015.

“Both women were worthy of the crown. I’m honored that I got to stand beside them,” Jordan posted in her Instagram account.

She said she felt devastated because Pia Wurtzbach’s moment as the rightful winner of the Miss Universe 2015 “was tainted with controversy” while Ariadna Gutierrez’s dream was “ripped away” from her in an instant.

During the coronation night on Monday morning (Philippine time), Harvey mixed up the result of the pageant as he announced that Miss Colombia won the Miss Universe pageant but later corrected his mistake announcing that Miss Philippines was the pageant winner.

“It was the most bizarre and confusing of circumstances for the final two. I think everyone in the room was at a loss for how to react as the situation played out in real time,” Jordan said.

Miss USA believed that Wurtzbach and Gutierrez would have “an incredible year ahead of them where they will embrace every opportunity that comes out of this.”

Despite Harvey’s mistake, she said it “was an honest mistake that he has owned up to and apologized for.”

“We are all perfectly imperfect as humans and mistakes happen. Let’s please spread love and positivity,” she said.