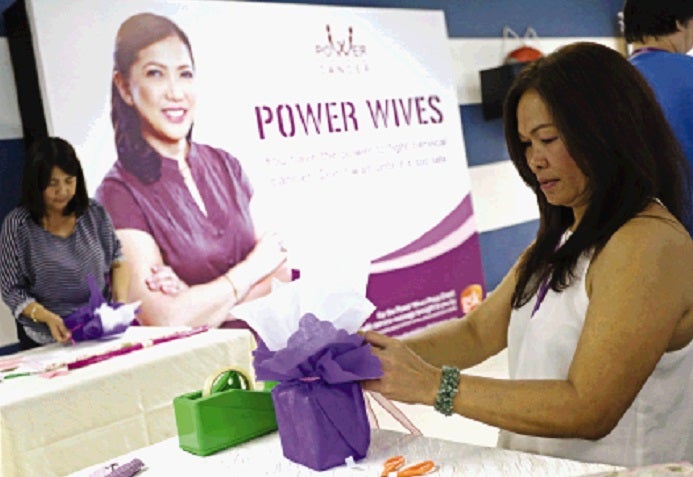 SEAMEN’S wives learn how to wrap gifts and other skills for livelihood. PHOTOS: KIMBERLY DELA CRUZ

At a health and beauty workshop for seamen’s wives, less than 10 out of 40 participants were aware of cervical cancer and its indications.

The workshop was part of an advocacy called “Power Over Cervical Cancer” by the multinational pharmaceutical company GlaxoSmithKline (GSK). The company collaborated with the Philippine Transmarine Carriers (PTC), an agency that supplies global maritime professionals—aka seamen—to cargo and cruises.

Normita Hernandez, PTC’s family and crew relations manager, observed that when the office gets requests for a certification for their Philhealth, chemotherapy for cervical cancer is one of the major reasons.

HPV infections are more likely to occur among those with multiple sex partners, or who have sex with a single partner who has a history of multiple partners. HPV can also cause  genital warts and cancers of the genitals in both men and women.

According to the “Textbook of Maritime Medicine,” seafarers, historically, have been very vulnerable to sexually transmitted diseases. The records date back to Christopher Columbus’ voyage to America in the 16th century, in which half of the crew contacted sexually transmitted diseases (STD) after having sex with women in Haiti. It mentions cases worldwide of how seamen are vulnerable to STD and HIV/AIDS.

This exposure is promoted by the long periods of separation from their families, with seafarers tending to resort to casual sex in ports. Their chances of becoming infected are in places with a high occurrence of STDs.

The Philippines is the largest supplier of seafarers in the world, with a ratio of one out of four seafarers on international shipping. The industry deploys 37,000 global maritime professionals.  To provide security for the seamen’s families, PTC has a department that looks after the family life of crew members. One of its wellness programs is to organize activities for the wives.

Hernandez recalled that in a previous program, the speaker urged the women to have their husbands undergo a health examination when they come home.

In 2012, PTC organized a lecture on cervical cancer and prevention through checkup and vaccination. However, women tend to prioritize the health of their children instead of themselves. They are also intimidated by the costs of vaccinations. In this regard, the company has been trying to get discounted rates for them.

Cervical cancer or HPV infection is not just specific to a certain income group or demographic, noted Leah Cheryl Manio, an OB-gynecologist and medical affairs manager of GSK. “Every woman is at risk of cervical cancer regardless of age, education and social status,” she said. “HPV infection is silent. A woman may have an HPV infection without knowing it because there are no symptoms when it’s in the premalignant stage.”

Cervical intraepithelial neoplasia (CIN) is the abnormal growth of cells in the cervix, the lower part of the womb that opens to the junction of the vagina. CIN is cured by the body’s immune systems. Still, some cases can develop into cervical cancer. The symptoms are masses, vaginal spotting, post-coital bleeding, odorous discharge and hypogastric pain, commonly known as sakit sa puson.

“Unless women have regular pap smears and  health examinations, CIN will be left undetected,” said Dr. Manio. A pap smear probes for precancerous cells and cell changes on the cervix that may develop into cervical cancer without adequate treatment.

Dr. Manio recalled a 50-year-old patient, a market vendor in Bulacan, who consulted her about painful urination. When the patient first went to a provincial hospital, she was diagnosed with urinary tract infection and was given antibiotics. Still the pain persisted.

When Dr. Manio did a biopsy on the woman, she discovered a mass impinging on the urethra, the duct where the urine passes.  It was already stage 3 of cervical cancer, which means the cancer had spread from the cervix to the vagina, pelvis and kidneys.

Dr. Manio added that the patient revealed little of her history. “She had children and just one partner, her husband. She denied that her husband was philandering.”

Given that three percent of the general population can have the cervical HPV infection anytime, according to the Philippines-ICO Information Center on HPV and Cancer, GSK has been urging women to have regular health examinations and consult their doctors regarding vaccines for protection against the HPV virus.

“Medical screening is extremely low in the Philippines,” said Dr. Manio. She added that women from lower-income groups can have checkups based on the acetic acid tests conducted by barangay health workers. Companies such as GSK are offering vaccines, dispensed by gynecologists, at accessible prices.

Members of Women in Maritime Philippines, an organization that represents women in the maritime industry, can also avail themselves of these vaccines at a lower price.