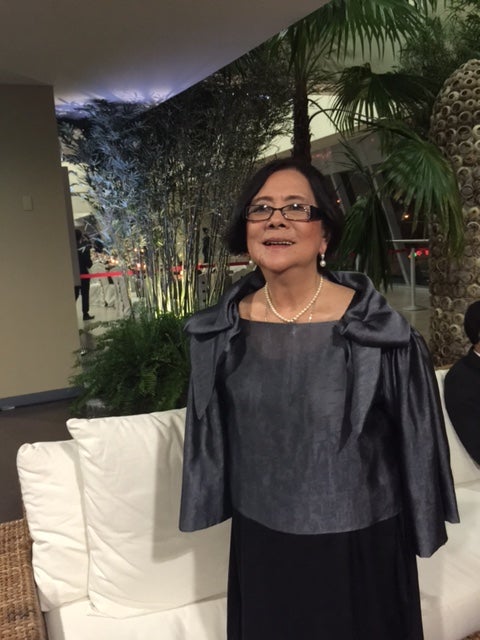 Till we meet again, my ‘palangga’ Letty

I got the news of Letty Jimenez-Magsanoc’s untimely death at Lorrie Reynoso’s house after midnight Mass and dinner at the home of Liding Oledan on Christmas Eve.

Up to now, I am still in denial that my palangga has gone on to a better world.

Since Dr. Carlitos Magsanoc was a close friend of my dad, I could write many things about my very happy relationship with Letty in and out of the Inquirer office. As always, I would bring her favorite brand of wine whenever I would visit her.

Oh, Letty, my Letty! I will miss our chats, laughter and dancing, whenever you had the time to escape from the tons of work in the Inquirer.

Have a great time, my love, with Isagani Yambot and the rest of the Inquirer gang up there. Love you dearly forever. Till we meet again, palangga.

Christmas is still in the air, and, south of Manila, Filinvest City kicked off its biggest and brightest Christmas happening recently.

This year’s theme was “Light of Christmas,” which paid homage to the age-old tale of the birth of Christ and the light it has shone forth. Filinvest City emphasizes going back to the basics to bring back those good old holiday traditions that we have all been accustomed to.

The annual musical lights showcase at the River Park of Festival Supermall, which sparkled every 30 minutes from 6 to 9 p.m., up to Dec. 30, had some 35,000 marvelous lights, accompanied by the rhythmic and upbeat sounds of familiar Christmas carols.

A variety of performances by choral groups and other performing artists also delighted crowds at the River Park every weekend of December.

The new Japanese franchise in town is Tempura Tendon, which opened recently at the fourth floor of SM Megamall in Mandaluyong.

Tenya is said to be the top and biggest tempura restaurant in Japan.

Tenya Philippines is owned by Tencav Inc., owned and managed by the same group behind Racks, consisting of Junior and Chiqui Prieto, Marie Ramos, Andre Kahn and Pilar Prieto Lorenzo. General manager is Iggy Ramos, and Denise Ramos is director for operations.

All those who love tempura (and who does not?) must check Tenya out. It uses top-quality ingredients such as tiger prawns and canola oil, and imported raw materials from Japan, including  flour, noodles and Japanese-variety rice. Yummy.

After stuffing yourself with the superb tendons (tiger prawns, kisu, salmon, or kani and French beans over rice), isobe cheese, soba and udon, you’ll be pleasantly surprised that your stomach is full and happy—but your wallet is not crying. Cool!

Andre Kahn and his former 99.5 RT crew held a reunion of the station’s disc jockeys recently at Tenya, and they enjoyed the food.