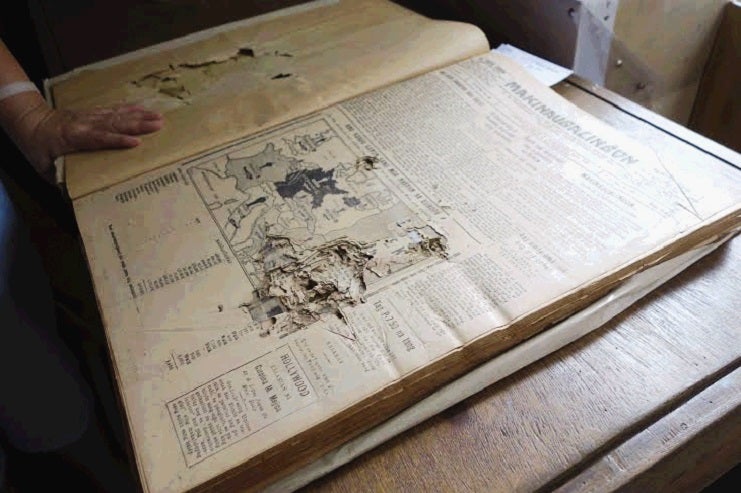 IN THE VOYAGE of the seven seas of Scheherazade, travelers sailed from isle to isle to trade goods in the marketplace and to feast on tales of marvel and adventures. Escapades such as those of Sindbad were scribed in letters of gold and stored in the archives of kingdoms. Traveling was a lifestyle of amassing stories and verses.

For contemporary lovers of letters, traveling around the archipelago consists of the pleasure of discovering singular books and printed materials in bookshops, curio shops and museums. Each town has its own literary finds, awaiting the quick eye of a book-conscious traveler.

Makinaugalingon Press is a renowned printing and publishing firm in Molo, Iloilo; its production ranges from commercial calendars to benefit dance tickets and pamphlets to books. The founder was Don Rosendo Madrazo Mejica (1873-1956), a politician-philanthropist celebrated for establishing the Baluarte Elementary School in 1902, and serving as town councilor for nearly three decades. Mejica was, more significantly, a writer, journalist and publisher.

His house, a balay na bato, has been transformed into a lifestyle museum, showcasing huge printing equipment of the early 20th century such as the letterpress, binder, perforating machine, giant stapler, among others, and featuring photographs, furniture and the paraphernalia of a bygone era.

In 1973, the museum received a marker from the National Historical Commission, which hailed Mejica, on the occasion of his birth centenary, as the patriarch of Visayan journalism and publishing, and a leader of education and community service in Iloilo.

Of lesser interest to a country with a myriad of silver isles but considerably more crucial to the evolution of a nation’s literacy and intellectual sensibility is the archive of the Mejica Museum, treasuring the book and print collections of Don Rosendo. For the Philippine studies scholar, particularly in ethno-cultural writing, the library is a gold mine. It is a testament to the cerebral prowess alighting in the small hearths of our multicultural estate.

Indeed, Mejica was a man of intellectual foresight with a tough political will. In a time when the English language began to reign supreme, his Makinaugalingon weekly (1913-1941) was the first and the largest broadsheet in Ilonggo. It was an outlet for many writers in the vernacular language, including Magdalena Jalandoni, Flavio Zaragoza Cano and Serapion Torre. Mejica served as editor and publisher.

Makinaugalingon means “self-reliant,” an emblem of exhortation to the community to stand on their feet and reclaim their language and culture. The newspaper weeklies have been preserved in a cabinet, awaiting the curious ardor of a book pilgrim or a wandering scholar.

Mejica was also the co-translator of José Rizal’s “Noli Me Tangere,” “El Filibusterismo” and “Mi Ultimo Adios” in Ilongo, extant copies published by Makinaugalingon Press nestled in a glass cabinet, with copyright certificates attesting to their origin. Also on the shelf was the last photograph of a distinguished-looking Graciano Lopez Jaena, provided by Makinaugalingon, which appeared in the Philippines Free Press.

Copies of Jalandoni’s works such as “Ang Akon Paglaum,” “Tinuhog nga Sampaguita,” “Lilay,” among others, can be located in the Mejica archive. Her story serials were most sought-after in the marketplace every Saturday, and her sarswelas were of a delicate, romantic air.

The Mejica repository, if given a fine touch of curatorial expertise, will be one of the very few literary museums in this country. The rareness is surprising, considering the multitude of our literary assets and the lengthy lists of wordwrights in the chronicles of Philippine letters. Existing notable literary museums include: in Museo Sugbo, Fort San Pedro, Cebu, the Vicente Rama Collection and Jovito Abellana Memorabilia; and in De la Salle University, Manila, the F. Sionil José Collection and Bienvenido N. Santos Literary Museum. Fort San Pedro also houses a little-known but remarkable gallery featuring the history of Cebu print and broadcast media.

Jalandoni’s birthplace and ancestral house used to be an elegant model of a Philippine literary museum. Displayed were Jalandoni’s books and manuscripts, paper-mache art and paintings, posters of sarswela productions, and an array of medals and memorabilia. The footsteps of the “Grand Old Lady of Ilonggo Literature” resounded in every room. Tragically, the place has been transformed into a spa, where one can get glowing radiant skin as a splendid means to relive the days of the wealthy in Jaro wonderland.

For the postmodern aficionado, museums and archives are ironically shadows of an age of grandeur, mere simulacra pointing to the feeble attempts of historians, heritage conservationists and ethnologists to cling to the tatters of empires.

Yet museums and archives recall the vital roles of art, writing and cultural artifacts in the formation of our national ideoscape. In this time of technology and gadgets, we hark back to an aeon where we were once navigators who ventured into the deepest seas and the farthest shores in search of intellectual excitement, and who passionately bartered for stories of marvel and adventures that enhance the nobility of the human spirit.

We keep in mind the bold creative impulses of our forebears, who birthed a nation with the mighty strokes of their pen. Shall not such impulses continue to blaze in our times, albeit anew? As the stone tablets of Mt. Sinai have been enshrined, so shall every word that goes forth from the pages of our national imagination.