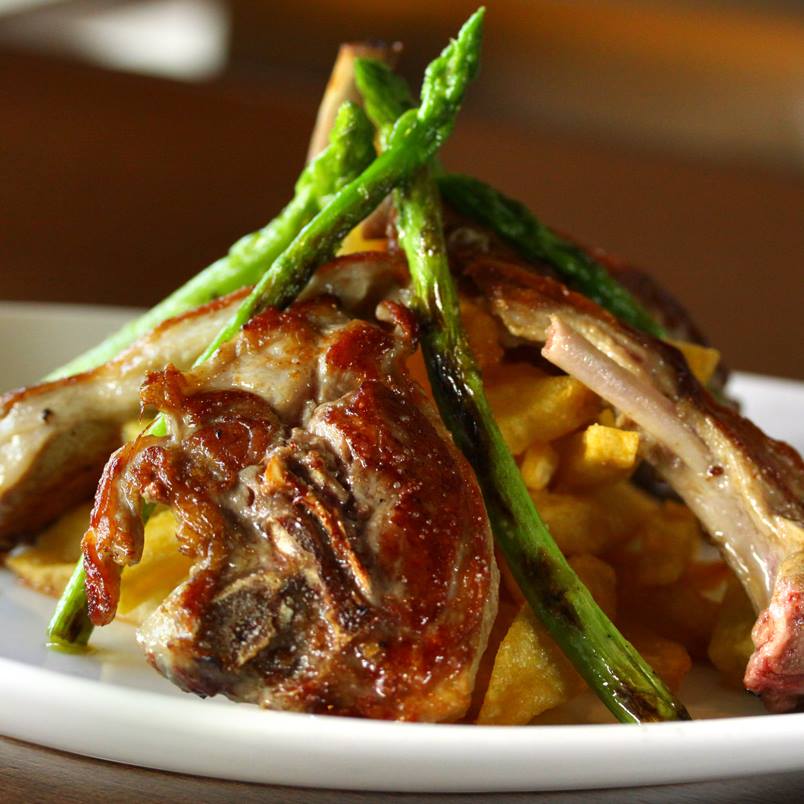 Seafood, lamb and quail–Spanish entrées worth spending for

Here’s a bit of a quandary. For quite some time now, the people behind Donosti have been inviting me to check out the place. And I’ve been dodging the invitation for almost as long.

I have no interest in writing negative reviews; so if there’s talk that a particular restaurant isn’t that great, I don’t cackle with glee, or crack my knuckles, and hotfoot it to the same place and then write a vitriolic piece. And people—including my wife who tried it early on—have been saying, since it opened, that Donosti was mediocre and outrageously expensive at that.

Thus I mentally drew a line through its name and forgot about it, until I reviewed Masseto late last year. I received another invitation to come and dine at Donosti (disclosure: at their expense). I also had heard that things had changed quite a bit since Tippi Tambunting, chef at Masseto, had brought her team over and was now also handling Donosti, although chef Pablo Lopez Iglesias still retains creative control over the kitchen.

I went with my family for lunch on a weekday, and we all had a fantastic time.

This put me into something of a dilemma, because even if I had made reservations with another name and arrived at Donosti unannounced, it still was a complimentary meal. The most doggedly ethical thing to do would be to go there again under yet another false name and pay for my meal this time, but the lineup for 2016 is already backed up with new restaurants to try.

I’m writing this review as honestly as possible. I will also try eating in Donosti again soon, pay the bill, and report back if I feel any differently or if my experience is any different.

The main beef leveled against Donosti is that the food is outrageously expensive and comes in tiny, tiny servings, which annoys me a great deal. It’s simply not how I eat and, I am willing to wager, not how most Pinoys like to eat. We like the table to be groaning with huge platters which we fall upon like a plague of locusts until it is ravaged.

I am aware that tininess is the essence of pintxos or tapas, and the restaurant’s full name is Donosti Pintxos y Tapas, which should give fair warning.

Another problem with small plates, especially when one isn’t drinking, is that of pricing versus expectation. If a dish on the menu is priced at P450, you order it thinking that’s not bad for something using ingredients at a restaurant on the main road of Bonifacio Global City (BGC). But then it comes as tiny bites and then you feel cheated, but since you’re already there, you might as well try and get full, and then the bill arrives and you get a shock down your spine.

Donosti is for those who like food in miniature sizes as a chaser to alcohol. The wine selection is expectedly exceptional, especially with the expanded wine list since the Masseto team came on board, and they have kept the pintxos menu.

What they seem to have done is expand the possibilities of eating there the way Filipinos like to eat, which is to have a whole lot in one go. The “big plates,” as they might as well be called in contrast to the first half of the menu, now seem to have a wider selection; the menu is augmented by a chalkboard for specials.

True to expectation, a lot of the dishes break the psychological price barrier of P1,000 that most restaurants have been careful to steer their way under (unless it’s steak or lobster or something with truffles).

For those who want a restaurant experience rather than a bibulous one, my advice would be to steer clear of Donosti’s small plates since they are, well, small. Also, unless you’re really craving, you might as well avoid the more conventional Spanish comfort food favorites, not because they’re bad but because you can get them cheaper at Terry’s. An exception: The acorn-fed ham might have been intended to pair off with a sinewy red wine, but it’s almost as good with iced tea for a teetotaller’s lunch.

As a restaurant, Donosti shines with the more inventive, interesting main courses rather than old-fashioned family favorites. For years the food critics have been raving about Spanish, especially Basque, cuisine, crowing that it isn’t just fabada and paella anymore. Dishes like the seafood main courses (many of them on the chalkboard), the lamb and the quail, are proof of Spain’s increasing relevance on European fine dining, more than the molecular mystique of the El Bulli alumni.

I would suggest that Donosti expand this aspect of its menu, because real grown-up fine dining is actually in short supply in BGC.

It might be that I’ve reached the age when I’d rather pay for P1,850 for quality lamb chops rather than a bargain price for a morass of charred ligament and fat.

Donosti’s prices mean that it’s not going to be an everyday sort of restaurant, and for steady-handed classical cuisine I’d still choose Masseto over its sibling. But I will stick out my neck and say that Donosti’s identity is evolving to become something other than a watering hole for plutocrats. Given its location, it’s the perfect place to go, say, to celebrate a clean bill of health from your internist at St. Luke’s.