After many years, the Nazareno’s is still the procession to watch | Inquirer Lifestyle ❮ ❯ 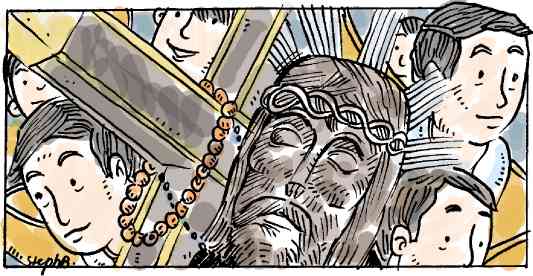 After many years, the Nazareno’s is still the procession to watch

It was in the mid-’90s that I began writing about the yearly procession honoring the image of the Miraculous Black Nazarene in Quiapo.  I was in my teens when the family decided to move to the ancestral house of my maternal grandmother after my father passed away.

Vergara is my treasury of childhood memories, which included skipping classes on that one day in January to watch the early morning parade of brass bands.   All paid homage to the Black Nazarene, the focal center of the procession.

In the ’60s, it was decided to sell the ancestral home.  I was devastated.  I had gotten used to watching the procession from the wide windows on the second floor, lit with candles.  It took some time before I went back to Quiapo with mixed feelings.

Across our former house was that of Justino Ocampo, whose wife Pilar happened to be the daughter of Dr. Canuto Reyes.  I learned that the latter was the very first health officer during José Rizal’s time.  The Ocampos’ children were my friends, which made it possible to watch the procession from their second-story window.

Year after year, I returned, noting numerous changes in the procession. The crowd had thickened. There were no longer any pasos, distinguished ladies whose faces were hidden behind black veils  held by makabukay vines.  These were medicinal, usually boiled in water to heal wounds.  The women also wore robes, like the Nazareno’s, and like the male devotees, walked barefoot, trailing behind.

Cars parked along the street were removed as early as 4 in the afternoon. By 6 in the evening, as the procession passed, we held our breaths if the carroza tilted in front of a particular house.  It was considered a blessing.

Before the Hijos del Nazareno were formally organized,  there were some four  to six burly men, including a movie actor.  His name was Quiel Segovia, and he kept protecting the image from rowdy men with sweaty towels clambering up the carroza.  Segovia played contrabida roles in the movies; hence, he was feared by all.

When the Ocampos also sold their house in Vergara, I began to watch the spectacle from the Picache Building in Plaza Miranda.  My good friend, the late Albert Seeland, introduced me to the Picaches, whose matriarch, Doña Tomasa, was the yearly Hermana Mayor.

She always had guests up in the penthouse, which commanded a perfect view of the Basilica Minore.

The late Mayor Antonio Villegas, a devotee, was known to attend the early morning Mass.  So did then First Lady Imelda Marcos.

The traslacion introduced a few years ago consists of bringing the image a day before the procession to the Luneta Grandstand to enable millions of devotees to kiss the feet of their beloved Nazareno.  Before the traslacion, it took six to seven hours  for the procession to return to the basilica.  Now, it involves much more, no less than 19 hours this year.

What drives devotees to undergo this ordeal year after year?  According to Manila Archbishop Luis Antonio Tagle in a TV interview, a devotee explained that it is alright to go through this frenzy because Christ suffered much more for humanity, so why shouldn’t he and other followers do the same, at least once a year?

Furthermore, Filipinos are generally an expressive people.  They express their faith through sacrifice and panata.  Many have no one to turn to, so they turn to Christ, who awakens their hope and who is in the midst of their own pain.

I opted to write this piece to correct some inconsistencies of some writers and TV commentators.  Years ago, I made my own investigation, which revealed that the color of the Nazarene is probably because it was carved by a Mexican Aztec Indian.

The image brought to our shores by Augustinian Recollects in 1630 did not catch fire, allegedly damaging the image to turn black.  This was also confirmed in the libraries of Franciscan and Jesuit priests.

Over the years, fragrant oils and perfume were rubbed on the miraculous image, thus affecting the color of the wood.

Note the image of the Virgin Mary in old churches like San Agustin.  They bear Chinese features, like the Chinese artisans who carved them.  The same goes for European sculptors who leave traces of their own features on images they carve.