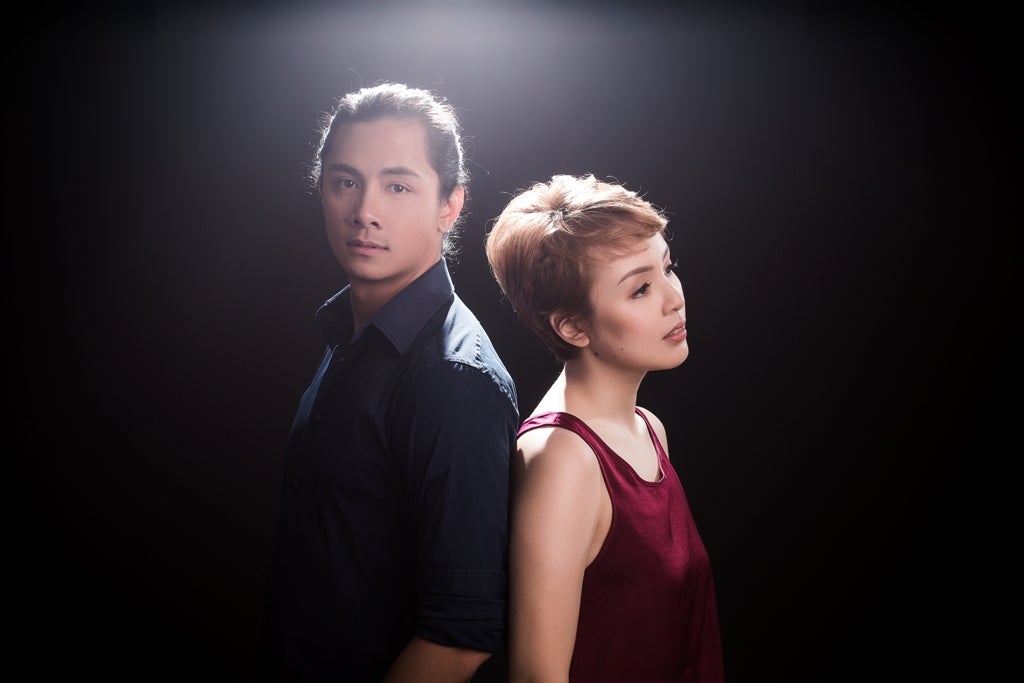 JC Santos and Cris Villonco step into British playwright Nick Payne’s theater “multiverse,” which has been described as “playful, intelligent and bursting with ideas, but also achieves a powerful undertow of emotion.” PHOTOS FROM RED TURNIP THEATER

Red Turnip Theater downscales but aims for the stars in ‘Constellations’

After the resounding success of “33 Variations,” featuring an ensemble led by seasoned thespians Teroy Guzman and Shamaine Centenera-Buencamino in a fiercely dynamic staging of Moisés Kaufman’s ambitious play about genius and obsession, Red Turnip Theater scales back with its next offering and season-ender, the two-hander romantic drama “Constellations.”

But expect the downscaling to go no further than the cast and logistics.

The material is what director and Red Turnip cofounder Rem Zamora calls “a very Turnip play,” meaning it has passed the  group’s standards for material selection—that it be a piece of beautiful writing the Filipino audience can relate to. Clearly, it has made a strong impression since its debut in the modest confines of a London upstairs performance venue in 2012.

Starring Rafe Spall and Sally Hawkins, the production received a big thumbs-up from the British press. It earned a five-star rating from The Telegraph theater critic Charles Spencer, who wrote that the performance “lasts just over an hour but packs in more than most shows manage in three times that length. It is playful, intelligent and bursting with ideas, but also achieves a powerful undertow of emotion.”

Since then, the play has had a West End run and early last year crossed over to Broadway, where producers gave it a bigger, glammed-up treatment involving the stellar pair-up of 2006 Bafta winner and Oscar nominee Jake Gyllenhaal and recent Golden Globe awardee Ruth Wilson.

The New York Times’ Ben Brantley proclaimed it could “be the most sophisticated date play Broadway has seen,” that it is “supremely articulate” as well as “universal in every sense of the word.”

Penned by British playwright and screenwriter Nick Payne, “Constellations” is boy-meets-girl, with alternative versions.
These versions, according to the multiverse theory which Payne used to propel the story, could take place in parallel universes.

In Zamora’s words, “it’s about what happens, what will happen, and what could happen. Basically you’re presented with a situation and then you shift to another universe or dimension and you’re given the same situation but [it plays out] differently. There’s something that changes… with several what-ifs or what-could-have-beens.”

Director of the Red Turnip staging of the Olivier Award-winning comedy “Cock” (2014) and the Donald Margulies drama “Time Stands Still” (2015), Zamora may not have the resources of West End and Broadway productions, but he certainly has other equally significant things going for him.

First, he has an eye for chemistry, as with the love triangle that was Topper Fabregas, Niccolo Manahan and Jenny Jamora in “Cock,” or the pairings Ana Abad Santos-Nonie Buencamino and Giannina Ocampo-Nor Domingo in “Time Stands Still.”

“I think they represent everybody,” Zamora said of the characters. “The situation where we meet someone and whether we give them a chance or not, people can relate to that.”

Second, there’s the collaboration with what Zamora deems a creatively resourceful as well as reliable production team consisting of set designer Ed Lacson Jr., the man who designed the stage which aided the seamless shifts of period settings in “33 Variations”; the award-winning John Batalla for lighting design and technical direction; Marta Lovina for costumes; and Teresa Barrozo for sound design.

Lastly, though no less significant, is Zamora’s fastidious work process.

“Preparation, and that there’s more than one way of doing things which I think you should explore or exhaust… until you find the one that works,” he said.

That seems like a good mind-set to have, especially in a play like “Constellations” which has repetitive dialogue, where the slightest change in the delivery could completely alter a scene or, inversely, make it redundant.

“I feel like I’m directing for the first time again,” Zamora said, referring to the burden of expectations that followed the overwhelming response to his two previous Red Turnip directing projects.

“It’s scary. Of course you worry. People ask me, ‘What’s your style?’” Wala pa akong style, bagong bago pa ako eh. I don’t know if I have a style. So what do I do? I just try to understand the material as exhaustively as I can.”