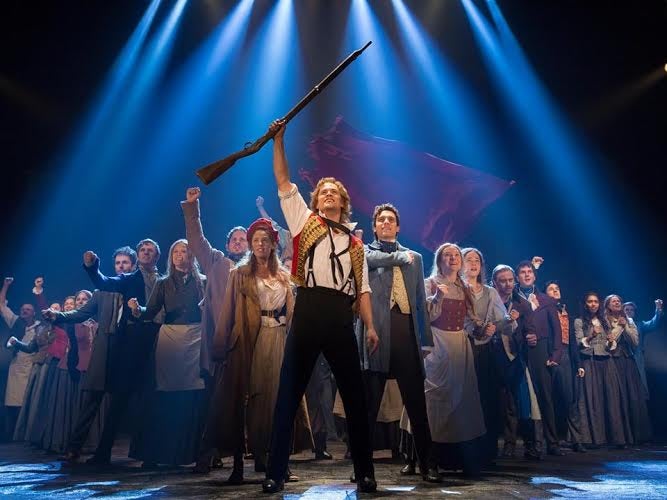 The Australian production of “Les Miserables,” which opens March 11 in Manila at The Theatre in Solaire. ALL PHOTOS FROM CAMERON MACKINTOSH PRODUCTIONS

Manila-bound ‘Les Mis’ is a can’t-miss

After nearly 600 performances over 19 months in four cities (Melbourne, Perth, Sydney and Brisbane), the acclaimed Australian production of “Les Miserables” took its last curtain call last Sunday at the Lyric Theatre of the Queensland Performing Arts Centre, with sold-out houses in its wake along with a slew of local theater awards (the Helpmann—Australia’s version of the Tonys—as well as the Green Room and Sydney Theatre awards).

The show—which has been described as “a dynamic, enthralling experience… [that] will elevate emotions in ways previously unknown (Sydney Daily Telegraph) and “Five stars… a musical and theatrical triumph” (Herald Sun, Melbourne)—is getting a bit of rest before it flies off to its next destination. In two weeks’ time, the “Les Mis” company will be in Manila for rehearsals and preparations for its Asian tour, which begins with a run at The Theatre in Solaire starting March 11.

Also beginning her rehearsals with the cast by first week of February is Rachelle Ann Go, who currently performs the role of Fantine in the long-running West End production of “Les Mis.”

Why the need for rehearsals this early, you may ask, when Go has been doing the role since June of last year? That’s because she needs the extra time to relearn her paces.

The “Les Miserables” she appears in at Queens Theatre, London, is the “classic” version of the musical, whereas the Australian production that will open in Manila and tour other Asian cities follows a retooled template of the show that features “fresh scenic and narrative elements as well as new orchestrations,” as Playbill.com put it when the revival opened on Broadway in 2014.

For long-time fans, the most immediately noticeable change in the reimagined “Les Mis” is the scenery. Gone is the iconic turntable stage, replaced by vaulting panels and scrims that move about in amazingly varied ways, taking advantage of the strides in backstage technology that have happened since the show opened over 30 years ago, in 1985.

The opening scene, originally set in a quarry, has now been transposed to the bowels of a ship, the convicts lashed to oars—the same opening reflected in the 2012 film version directed by Tom Hooper.

The impetus for that maritime image is a series of paintings by Victor Hugo himself that scenic designer Matt Kinley rediscovered when he went back to the “Les Miserables” author’s surviving effects while rethinking the musical. The paintings and drawings of ships, landscapes and Paris streets, mostly in black, browns and ochres, have been conscripted to serve as visual backdrops and projections for various scenes in this “Les Mis,” with the result that other elements—costumes, lighting, movement—have been rethought as well to blend with the new scenic design.

The costumes, for instance, are no longer the sea of earth tones that characterized the original production, but rendered more colorful, playful, to set them off vividly against the largely monochromatic Hugo backdrops.

The adult Cosette (Emily Langridge), once clad in a severe black frock with white lace trim around the neck (which made her look more like a postulant than the daughter of a well-off town mayor), is now in a bright green taffeta dress and blond curls, a representation that’s closer to how Hugo portrayed the character, “a vivacious, colorful teenager who’s on the cusp of wanting to be taken seriously and becoming a woman—a very vital young lady,” explains James Powell, who codirected the Australian production with Laurence Connor.

Eponine, meanwhile—Kerrie Anne Greenland, who, in her professional musical-theater debut in this part, won the 2015 Helpmann Award for Best Female Actor in a Supporting Role in a Musical, one of five trophies the production bagged—has ditched the brown beret for a red one; while Fantine, whose powder-blue costume will soon fix itself on Manila theatergoers’ minds because it is the dress Go will sing “I Dreamed a Dream” in, wears a streamlined silhouette of the fluffy, billowy affair Patti LuPone and the generations of Fantines that followed her had invariably worn.

The tightening and updating also extended to the narrative and score. Even as Claude-Michel Schönberg and Alain Boublil’s majestic, by now-legendary score still works in evoking all the familiar, shiver-inducing emotional high points of the musical, the reorchestrations have made the show feel altogether tighter, with greater headlong sweep and energy.

Gavroche’s “Little People” number, for example, even in the original version a marooned moment of levity in the midst of the assault on the barricades, has been recast into a pivotal, heartbreaking juncture in the students’ doomed insurrection. Bridge music has been trimmed, and the previously projected period captions have been done away with, the production trusting the audience to grasp narrative continuity through the compact, more cohesive storytelling.

The core, of course, of “Les Miserables”—Hugo’s panoramic melodrama of tenderness, frailty, desolation and redemption in a heaving, brutish world—remains.

“The important thing is, the story has to stay the same. It’s a story about the human condition; that never changes,” says Powell. “What’s applicable 400 years ago is the same today, because it’s about us, how we operate as a people. You can use more modern technology to facilitate how you tell the story—you can make the look of it very different—but it would be foolish to meddle with the classic, timeless story [of ‘Les Mis’]. What you can never dilute is the emotional impact of the piece.”

What Boublil-Schonberg’s “Les Miserables” does, as this topnotch Australian production affirms, is to honor Hugo’s humane idea of

the world by retelling it on the musical stage with “vocal splendour and emotional power, dynamic staging and a propulsive dramatic vision,” as The Age, Melbourne wrote.

The same production that generated that breathless appreciation, with the same cast from Down Under but for two confirmed changes so far (Go is replacing Patrice Tipoki, who is taking her place as Fantine in London; and Earl Carpenter, the current Javert on Broadway, plays in Manila, switching places with Hayden Tee), will begin enthralling Filipino audiences by March—just six weeks from now.

Simon Gleeson is set to reprise his Helpmann-winning role as Jean Valjean, and Greenland her Eponine. And with Go on board as the latest Filipino actor to make waves abroad as Fantine after the likes of Lea Salonga and Joanna Ampil, this “Les Mis” just about bolts from must-see to can’t-miss.

Cameron Mackintosh’s Australian production of “Les Miserables,” brought to Manila by Concertus Manila, opens March 11 at The Theatre at Solaire. For tickets, visit ticketworld.com.ph or LesMis.com.ph