‘Tito Noy is still the same person to us, except that we stand when he enters the room’ | Lifestyle.INQ ❮ ❯ 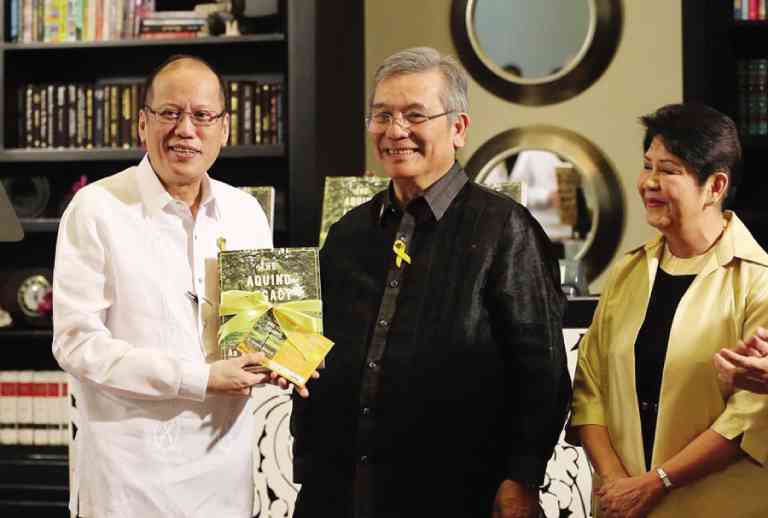 ‘Tito Noy is still the same person to us, except that we stand when he enters the room’

Two days before the Nov. 26 launch of “The Aquino Legacy: An Enduring Narrative” (Imprint Publishing) that my husband Elfren and I authored, we were having a dry run of the program at the venue, the Writers Bar of Raffles Makati.

The Presidential Security Group (PSG) and the Presidential Management Staff were to brief us on the curbside welcome for President Aquino, the proper way to announce his arrival, the presentation of the first copy of the book, the podium to be used.

Late afternoon the day before the launch, the same parties curtly informed us that the President would not be able to come. I could not dare ask for a reason, that being presidential prerogative and all.

We were disappointed, though we knew all along that more important matters of the state could easily make that happen—which is why we did not announce that Mr. Aquino may be coming, but just requested everyone to be seated by 4:30 p.m.

Since his three sisters—except for Kris, who was busy that day because of Bimby’s First Communion and show biz matters—were coming, we knew the launch would still be festive.

Education Secretary Bro. Armin Luistro remained the guest speaker as the book was meant for millennials, those who know Cory and Ninoy only as the faces on the Philippine currency and the parents of P-Noy and Kris.

The hotel security was alternately disappointed and relieved that crowd control was no longer needed. They even said that handling Presidential security was a breeze compared to a Kris reception.

Little did we suspect that there were more surprises to come. Three hours before the event, the PSG alerted hotel security that the President was coming, after all, but an hour earlier. It seemed like a wild rumor until Malacañang confirmed it, and so did Bro. Armin’s office.

Ballsy, Pinky and Viel were hastily texted, but none of them could navigate the streets of Manila in time. It was so amusing how the President and Ballsy met on the hotel’s red carpet—he on his way out and she on her way in, warmly greeting him with a “Sorry, ha.”

But all’s well that ends well, as we used two versions of the program—a treat for all the guests who came from 4 to 8 p.m., as the invitation stated. If they missed the President, there were his siblings.

Mr. Aquino explained the mixed signals about his attendance. It was a few days before his departure for the climate change summit in Paris, and he had developed a bad sore throat. Could it be because of your smoking, I rudely asked, which may have been out of turn.

His doctor advised him to rest till his departure, so he requested the audience not to say anything about his presence that afternoon. He was continuing to violate doctor’s orders by proceeding to the wake of LP stalwart, former Rep. Niel Tupas  Sr., in Quezon City.

In his remarks, the President hoped that the book would show “present generations of how many millions of Filipinos took a stand against the dictatorship… the normal lives we (the Aquinos) tried to lead in spite of extremely extraordinary circumstances, and the lessons and principles that continue to guide us to this day.”

He ended with the reminder,  “(If) We forget the past, we are condemned to repeat the same mistakes. Hopefully, that will not come to pass.”

At the second ceremony, Ballsy was prevailed upon to speak (there was sibling bantering with Ballsy pointing to Pinky as the family representative, while Pinky reminded her she is Ate, after all), repeating the concern that the democracy her parents struggled for is safeguarded.

There is no truth to the rumor that Elfren and I authored a book to decide once and for all who is the better writer between us.

It was Elfren’s idea to have such a book for millennials for them to know: that the Edsa Revolution of 1986 was not a festive event of a few days, but began years before, with Ninoy’s Laban party initiatives in 1978; that the revolution toward a more equitable Philippine society goes on; and that Ninoy and Cory Aquino, as seen through the eyes of those who knew them best, were ordinary individuals who took on the challenges thrust upon them.

We felt this urgency to document, even as some quarters urge us to “move on,”  leave the dark era of martial law behind, as if the remembrance of things past and sordid and painful posed an obstacle to our progress and maturity as a nation.

Many of us bear the scars of martial law, some more deeply than others, and are burdened with traumatic stories that need to be retold over and over—for the healing that comes with every retelling.

This book was launched on the eve of Ninoy Aquino’s 83rd birthday for today’s millennials, that they may approach this period of history with greater interest and curiosity and less trepidation about cold, hardnosed historical facts.

Straightforward historical accounts and commentaries have been juxtaposed against human interest essays, many of which have not seen publication.

We make no claims about this being an exhaustive book, nor do we mean to deify Ninoy and Cory. Much more needs to be written and studied, especially on President Aquino after he steps down.

These essays would not have been possible without the total cooperation of spouses and grandchildren—though typically guarded, reluctant and cautious for some members of the family who, if they had their way, would have wanted less attention on themselves.

The grandchildren’s comments were endearing and amusing. “Why focus on us when it was an accident that we got into the bloodline?” “Tito Noy is still the same person to us, except that we stand when he enters the room.”

In answer to a question on their best Ninoy memory, I got the answer that I deserved —what can beat his coming home and being shot dead for democracy?

I had to convince and coax by teasing, “If President Cory trusted me through all those interviews I had with her, would you not?”

Yet they were quick to respond, especially after Ballsy’s exercise of her gentle but respected matriarchal clout, even granting an unexpected presidential interview strictly scheduled for an hour yet allowed to spill into another.

And guess who of the Aquino children was the most elusive and the hardest to track down—the one with the Malacañang address or the sui generis sibling?

A star-studded book launch with two sets of ceremonies and guests? What is there to complain about?

“The Aquino Legacy: An Enduring Narrative” is available at Fully Booked.