Ayala out to inspire mall shoppers into volunteerism 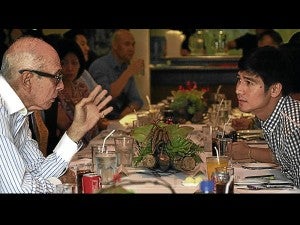 One of the biggest criticisms about the late great CEO and billionaire Steve Jobs was that he didn’t espouse or use his influence and renown to promote philanthropy, quite unlike his contemporary and longtime rival Bill Gates.

Surely, the same thing can’t be said of the top management of the Ayala organization. Jaime Zobel de Ayala, chair emeritus of Ayala Corp., even in retirement, is a relentless proponent of giving back to the community. Ayala’s marketing projects encourage and inspire charity and volunteerism.

This is the thrust the Ayala Malls hope their shoppers will realize and follow this holiday season: “to inspire shoppers to give more of themselves,” as Ayala Land Inc. president Antonino Aquino put it.

“A lot of Filipinos want to help but they just don’t have the right access,” said actor-singer Piolo Pascual, who’s collaborating with the company for the third year in a row. (Pascual performed in a concert with singer Yeng Constantino Friday at Trinoma Mall, as part of Ayala Malls’ holiday activities.)

“We all have our sense of volunteerism, but some of us may not know where to start, and how,” Pascual said. “Ayala is bringing it to the public.”

For Christmas, Ayala Malls is setting up volunteer sign-up booths in all its malls, where shoppers can choose among six foundation-beneficiaries for their volunteer work: Iraya- 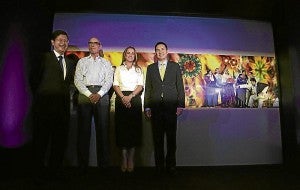 The theme of Ayala’s festivities this year is “Inspire.”

There will also be places where shoppers using MasterCard can write down their personal life hero in exchange for gift vouchers.

“Through the collective efforts of everybody, and through the generosity of shoppers, we can be assured that the proceeds will be channeled to the most important advocacies,” Aquino said.

The actor-singer is not a stranger to philanthropy. Pascual heads his own foundation called Hebreo, which sends deserving students to school. It started when he was approached by his own high school alma mater to support some students. Now he has scholars from different provinces, from prep to college, from seminarians to law students. 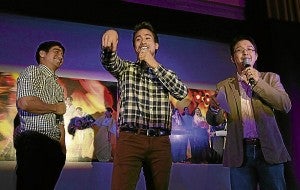 “I was unable to finish college myself, but I know how important education is,” he said. “That’s what’s going to bring you places… I’ve been very blessed. It’s my duty to pay it forward. If you’re blessed, you have to give back.”

Pascual also encourages individuals to help his foundation instead of giving him personal gifts. “Sometimes I get gifts that I’m unable to use. Sayang. I tell them to just give to the foundation. That’s what I tell people. We’ve been quiet about it because I’m a celebrity and it might be misconstrued. ”

Pascual noted that the companies he endorses have also been generous to his charity projects. One has produced his photography journal, which benefits Hebreo. The same company, a preneed firm, will sponsor a race next month and an online auction of his photographs. (Pascual is a photography hobbyist and avid runner.)

Ayala’s advocacies have been in sync with the multi-hyphenate Pascual so he has agreed to work with the company for the third time. At the launch, he and the Zobel patriarch chatted animatedly about their shared interest: photography. Pascual and Zobel have held a photo exhibit for “Bravo Filipino,” the cultural project of Ayala Malls. 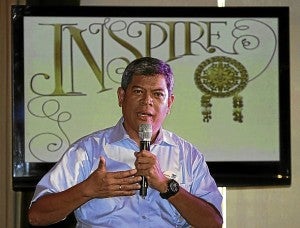 They know how to give back to the community,” Pascual said of the Zobels. “They just don’t work for themselves. They share. They showcase Filipino talents. Everyone in the family is also quite grounded, they’re very approachable.”

One new “recruit” to the Ayala events is actor-singer Sam Milby, who will perform in three concerts at the malls for the holidays (Nov. 13 with Angeline Quinto in Glorietta; Nov. 15 in Abreeza Davao and Dec. 3 in Ayala Center Cebu, both with Yeng Constantino).

Milby, who said he had just auditioned for an American production on a recent trip to the US, does his own share for the World Vision Phils. He sponsors eight kids to school.

Following tradition, Zobel was tasked to create the artwork that will encapsulate the year’s theme.

“Every year I get more and more elaborate and I’m running out of ideas,” he said in jest.

He talked of how he and his team created the parol tableaux that made up the artwork. He tapped lighting and costume designer Gino Gonzales, and also Ayala employees to be actor- 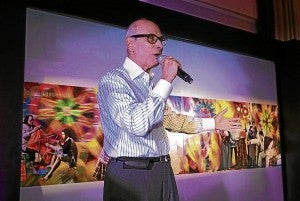 models. “Cheap labor,” he said with a laugh.

“At first, they were, ‘Ayoko, ayoko,’ and later, ‘Kasali ba ako?’” Pretty soon, he was swamped with photos of employees’ kids, their parents volunteering them in the production. He even “borrowed” the choreographer of Steps, his daughter Sofia Elizalde’s dance studio, to play the part of parol maker. Then he pointed out a faux pas in one tableau: a model in Maria Clara has a mobile phone to her ear! Maybe she’s promoting Globe, one suggested, referring to the Ayala’s telecom company.

“It was good fun!” Zobel said of the whole affair. The artworks will be reproduced in greeting cards.

Elizalde’s Steps will also perform in the mall concerts. As in the previous year, it’s the directress’ way of bringing ballet to the masses.

Sam Concepcion and Matteo Guiducelli will perform in Alabang Town Center on Nov. 26. Black Eyed Peas’ Apl De Ap. whose own foundation is also a beneficiary, will close the year’s activities on Dec. 7 at Greenbelt Fashion Walk. Other performers will be Dulce, Gian Magdangal, Arjohn Gilbert, The Philippine Opera Company, Chorale from Pampanga.