‘Les Mis’ in Manila is another reason to dress up | Lifestyle.INQ ❮ ❯ 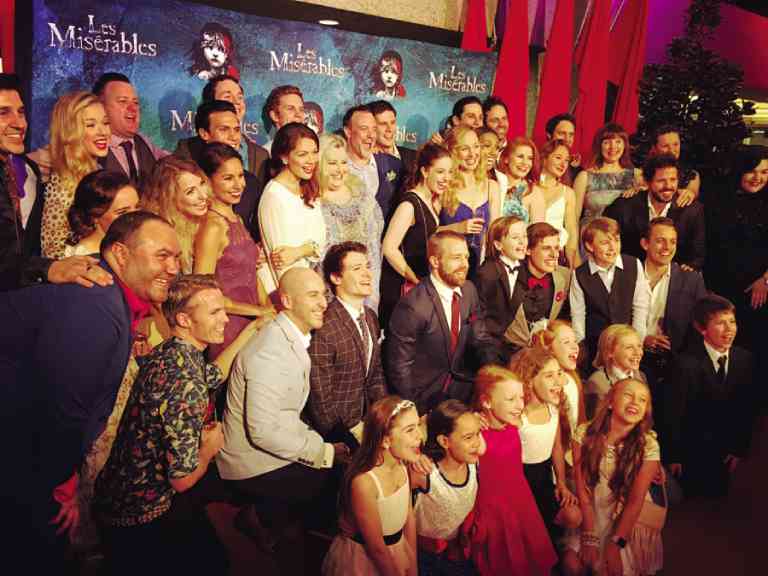 THE AUSTRALIA cast of “Les Miserables” at Brisbane premiere

‘Les Mis’ in Manila is another reason to dress up

With Valentine’s Day just around the corner, I’m reminiscing about the first time my hubby Dennis and I dated. Back in Hong Kong in 1993, we went off to watch an opera. Why can I remember what he wore but not what we watched? Maybe it’s because I was late, as usual, and so we missed the entire first act.

At any rate, even today, I love the opera because it brings back so many memories, hazy though they are. Modern operas are huge musical productions, and I get to wear a ballgown and feel like I am part of the cast. I had so much fun during the Manila legs of “Cats,” “Phantom” and “Wicked,” especially as I got to wear matching outfits to all.

Imagine my excitement for “Les Miserables,” which is coming to Manila from March 11 to April 17 at The Theatre at Solaire. To prep for the opening, Concertus Manila sent a media group to Australia for the opening in Brisbane.

Simon Gleeson, Helpmann Award winner, plays ex-convict Jean Valjean, and Earl Carpenter plays Valjean’s archenemy Police Inspector Javert. Carpenter, who just concluded his run as the inspector in “Les Mis” on Broadway, has also appeared in the original and 25th-anniversary productions and concert celebrations of “Les Mis,” “The Phantom of the Opera” and more. The outstanding cast has been touring all over Oz, with Brisbane as their last leg before heading on their Asian tour cities, Manila and Singapore.

Michael Cassel, Mackintosh’s Australian representative and executive producer of “Les Mis” in Australia, Manila and Singapore, was delighted to meet the Philippine media at the after party on opening night. He told us the biggest reason why we should all see “Les Mis” in March.

Rachelle Ann Go, who is currently setting London aflame playing Fantine in “Les Mis” over there, will be coming to Manila to join the Oz cast. The multi-award-winning singer-actress is very excited to be part of the production and perform for her kababayan. Rachelle broke   into the limelight playing Gigi in “Miss Saigon,” but has also played such diverse roles as Ariel in the “Little Mermaid” and Jane in the musical “Tarzan.”

Rachelle performed as Fantine in London on Saturday, but she’s heading home to join the cast and won’t be back in the West End until May. In Brisbane, Fantine is played by Patrice Topaki, but she flies to London to take over for Rachelle. It’s the swap of a lifetime, so to speak. Good for Patrice, but also great for Rachelle and her Pinoy fans.

Rachelle is not the only Filipina taking on a titular character in the cast, as Australian-Filipina Chloe de los Santos will be playing the role of Little Cosette. Chloe trained at the Young Australian Talent Company, Capa and played Ying Yaowalak in “The King and I” for Opera Australia.

Having Pinays in the cast can only bring more majesty to the magnificent score of “Les Mis.” I cannot wait to see Rachelle and Chloe, among the other great cast members, perform the classic songs “I Dreamed a Dream,” “On My Own,” “Stars,” “Bring Him Home,” “Do You Hear the People Sing?” “One Day More,” “Empty Chairs at Empty Tables,” “Master of the House” and many more.

Among the Aussie cast members are Kerrie Anne Greenland, who plays Eponine, and Emily Langridge, cast in the beloved role of Cosette. The two are graduates of the Western Australian Academy of Performing Arts, and Kerrie is a past Helpmann Award winner as well.

This new production of “Les Mis” has been praised by critics, fans and new audiences, breaking box office records internationally and inspiring filmmakers to make the outstandingly successful movie which went on to win three Oscars, three Golden Globes and five Helpmann Awards.

“Les Mis” has been seen by over 70 million people in 43 countries and in 22 languages, winning over 125 awards over its 30-year run. The show is based on the novel by Victor Hugo, with lyrics by Herbert Kretzmer, music by Claude-Michel Schönberg, and original French text by Alain Boublil and Jean-Marc Natel.

I’m certain the Manila run of “Les Mis” will be a blast, and I will be sure that hubby Dennis and I won’t be late this time around. To get tickets for “Les Mis” at The Theatre at Solaire, Solaire Resort and Casino, from March 11 to April 17, check out www.TicketWorld.com.ph or call 8919999. For further information, visit www.lesmis.com.ph.