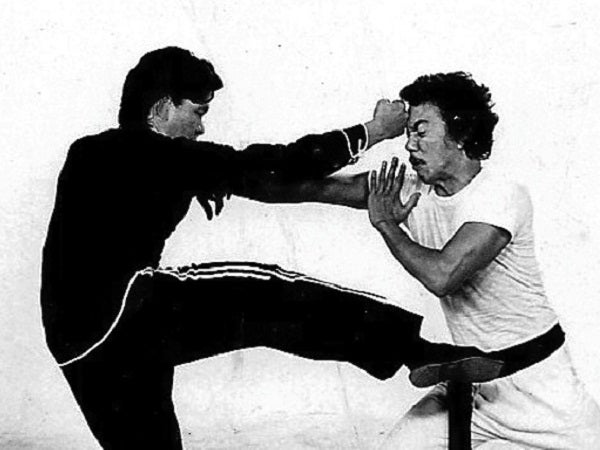 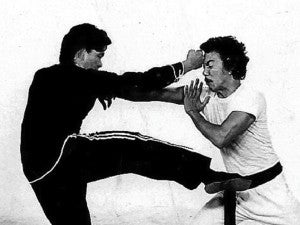 Half a century or so ago, Shakespeare Chan made his living as an assistant in a shop in Chinatown that sold exotic tropical fish. But practitioners of the Oriental martial arts knew him as an antiquarian and scholar of Chinese physical forms and dances, the c’hen tau of kung fu. It was rumored he had the capacity to make time stand still.

That was an illusion, of course. The young Shakespeare Chan was physically fluent in the extreme; his movements could fool you into seeing everything slowly, in full detail and clarity, in defiance of logic. He was a prodigy, a wunderkind.

That Chinatown of the 1960s is gone forever. For us visitors, the place was foreign as anything from Marco Polo: raucous, noisesome, strewn with relics of miracles and mermen, and streetside altars to the god of the ancient Nestorian Christians.

Shakespeare Chan was a very thin, earnest young man, with a small neat desk among the gigantic aquaria, among the riot of dazzling forms and colors—monsters, ravenants, flowers and anomalies—swimming vainly for the ocean. Shakes, as he was called, had by then already studied with the great teachers, sifu, of that time, in Manila, Hong Kong and elsewhere. The scion of an internationally known jeweler-mother, he was photographed standing on the right side of the old teachers, a signal honor. For one overseas sifu, it was rumored he was even assigned the enviable job of lighting the evening’s opium pipe.

He had traveled the world and fought in Brazil, in South Africa. No, he had not heard of Bruce Lee, and the kung fu craze was a few years ahead. He drove a growling, yellow Mustang.

Johnny Chiuten introduced me to Shakes. In a sudden, unexplained burst of generosity for which I will always be grateful, Johnny Chiuten, then president of the Karate Federation of the Philippines, introduced me to his Chinatown. I was an outsider and slow-learner at Johnny’s karate dojo in UP, tolerated to use the equipment there because Johnny and I were Beta Sigma batchmates, and because I had come from the summer amateurs to become boxing instructor for Gus Cailao’s University of the Philippines Physical Education program.

Maybe because of the everyday hurt involved, there were few opportunities for boxing. True, I learned much boxing with the wonderful Afable brothers, three of them poets and exceptionally tough customers. But in the end I had to accept that boxing sparmates from the bloodthirsty brotherhood of the Sigma Con Ratbu of UP College of Veterinary Medicine, Elliot Osit and Percy Baesa of Project 4, were gone.

To keep the edge, I learned the required karate stances, movements, breathing exercises and the pinan imperfectly, slowly. Through time I won my black belt honorarily, acknowledged after hard combat with the master himself, a Beta Sigma tradition.

I tried to learn my first Chinese form, Liao Kim’s Tiger Dragon. Soon after that Johnny Chiuten took me to meet Felix Licdao, Wong Kit Min, many others, including the legendary Liao Kim himself, who was sifu at Ling Nam where Johnny and Shakes were classmates and rivals. Then Johnny Chiuten, as was his wont, vanished.

I wanted to learn the Chinese forms, but this was impossible without Johnny. There were many stories of how desperately interested students managed through means fair or foul to enroll with the great sifu, and at the time I was that desperate. I went to visit Shakes at the tropical fish shop, and was finally able to ask what I could do for him to teach me his forms.

“I cannot teach you,” Shakespeare said. “You are Johnny’s student.”

I told him Johnny was gone, that I did not know where he was.

“You need to give me a letter from Johnny giving me permission to teach you,” he said.

For almost a year, I visited with Shakes regularly, talking food and politics, learning nuances about the exotic fish trade, buying and selling, and the network of suppliers in the inland seas. In those innocent years, I even heard of the dangerous technique of using carefully measured amounts of cyanide poison to immobilize desirable specimens. Not one word about the c’hen tau of kung fu.

But he did not. There passed another testing period, then another. Remember this was 50 years ago, and Shakespeare’s knowledge was secret, a religious secret, and not for sale. But I had gone through rigorous physical and psychological testing before, and trusted my determination.

Shakes was fluent, even eloquent in English, but the subject matter was so esoteric no dialect was satisfactory, the cultural context disconcertingly alien. Only by great effort did I become Shakespeare Chan’s student.

I studied the movements of the Tang Lang, the Praying Mantis style. To this day I cannot quite muster the clicking, slapping, stomping sounds that traditionally characterize the movements of the Mantis, as I practiced the form for power, wearing heavy iron rings clanging like pistons round my arms.

And while I studied the physical aspect, by seeming agreement we skirted the mystical; that was quite another matter. I was made to understand that I was in danger there, even when my secret name was writ in red paper then burned to be enrolled in rising smoke among the initiates.

The power of life

Last I saw Shakespeare was at the Beta Sigma tribute for Johnny Chiuten, who was to die a couple of years later. Shakes came to the tribute as my guest, accompanied by a group of old friends, my fellow instructors at the Chin Wu Athletic Association, a school we founded together, while we were young men who could not die. There are pictures of us as we were then, well-muscled, smiling, the young c’hi—the power of life—almost palpable below our navels.

Of course we abused the power. When warned to drink only warm fluids, we went behind Shakespeare’s back to drink ice water in the middle of our practice. We had sex even in periods we were asked to refrain. And we went looking for trouble, looking for fights, looking to prove the power, driving our fists wrist-deep into our enemies. We were not, as Shakespeare undoubtedly was, priests of the allegorical temple of Shaolin. We were of this world, and the world was wide.

There were stories and poems to read and to write, a revolution to fight, ecstasies and madness to tempt, women to celebrate and children to raise.  We had families, debts, jobs. Two fellow instructors developed troubling physical symptoms. I was hospitalized for a heart murmur and hypertension. It was time to go.

Nelson Guerrero to the sifu: What happens if I forget to do my breathing exercises?

Sifu: If you think it, you have done it.

Shakespeare says to me, You can do your Tang Lang exercises very slowly, like tai c’hi. I do not tell my teacher that is the way I had been practicing my Tang Lang for decades. Through middle age, old age, physical deterioration and decay, pain and loss and sickness and exhaustion. I do not tell him I continue to meditate as he demonstrated, and that, while I do not believe, I pray. I do not tell him that I do not forget my breathing exercises: the kung fu breathing he taught me, tai c’hi chuan, the karate breathing Johnny Chiuten taught me, even the Sufi breathing technique Juan José Cuadra, while he was Jolico, taught me.

These have become, for better or worse, memes I live by.

Tread lightly around that old, white-haired, limping man on his dawn walk. Once he knew to hold the breath of the Universe in his belly and—who knows—he may again.

As the poet says, “Silver and quicksilver, the human being. Catch him and he’s gone/ And soon enough you will follow.”