‘The Gruffalo–Live!’ shows how to keep the kids engaged and riveted | Lifestyle.INQ ❮ ❯ 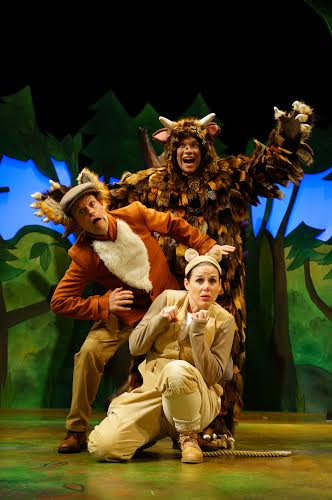 Director Olivia Jacobs kept the pace of “The Gruffalo—Live!” snappy, and even those who had not read the picture book could get into the storyline fairly quickly. PHOTO FROM CONCERTUS MANILA

‘The Gruffalo–Live!’ shows how to keep the kids engaged and riveted

“The kids must laugh, dance and sing with you. If they don’t, don’t blame them. That means you’re the ones who are not doing your job.”

That sage advice given years ago by Joy Virata to her ensemble of actors performing for the Repertory Children’s Theater holds more true now than before. Smartphones and tablets with their mesmerizing games have made even shorter the attention span of preteeners.

All it takes is one flat performance of a lead actor, music gone dull or, worse, a total absence of activity on the stage, and the young audience’s attention will wander.

It does not take a lot to see if the kids are taken along emotionally and intellectually with what’s happening before them on stage. They are either quiet and actively listening or watching—or they participate by giggling at the right lines, applauding at the funny moments, and interacting with the actors who occasionally break the fourth wall to ask them for a shout or a cheer.

The death knell in children’s theater happens the minute they start chatting with their seatmates; that could only mean they have lost interest in the play. The actors better recover lost ground, or risk playing to a beehive of restless kids until the final curtain.

Based on the audience’s reaction to its opening performance, Tall Stories’ production of “The Gruffalo—Live!” passed the test with flying colors. The rapt audience was a small crowd from the ages of three to about 14, with parents and nannies in tow. It did help that the kids appeared to be familiar with the award-winning picture book written by Julia Donaldson and Axel Scheffler on which the 90-minute mini-musical was based.

The show, which had toured Singapore and Hong Kong, was brought to Manila by Concertus Manila and Lunchbox Productions.

There was not a dull moment in the house. What was astonishing with Tall Stories’ rendition was that the witty story unfolded with just a three-member ensemble who quickly changed into eye-catching, if economically mounted, costumes.

Only the Gruffalo piece needed more work. Director Olivia Jacobs kept the pace snappy, and even those who had not read the book could get into the story line fairly quickly.

A spunky, fresh-faced Ellie Belle played the Mouse who found herself facing predators in the jungle while searching for hazelnuts. Timothy Richey stole the show as he successively transformed himself into a hungry fox, a vain snake, and other animals who all wanted to have the poor Mouse for dinner.

Relying only on her smarts, the Mouse concocted an imaginary creature, the Gruffalo, a top-of-the-food-chain monster that was an amalgam of bear, mountain lion and ox. The non-existent Gruffalo also preyed on the predators of the forest.

It turned out he might be real after all; Owen Guerin would shed off his chorus-part meekness to assume the form of the monstrous beast.

The fun was in seeing Mouse outwit all the creatures out for her hide, including the Gruffalo. Isla Shaw’s design made for a colorful forest, but the hook that kept the young crowd glued was how the writer and the actors played on their collective imagination.

The toddlers and preteens empathized with the predators’ fear of the Gruffalo, seeing all the characteristics of the Gruffalo as the Mouse painted it for them. Then, when she turned the tables on the Gruffalo, the young crowd watched the creature transform from a monster to a harmless myth.

In the end, it was the little Mouse who stood tall, by using her mind to disprove her own fears. This timeless lesson appeared to have been easily absorbed by the kiddie crowd, who went along cheerily for the ride.

No heavy preaching, no beating on the head with a book. “The Gruffalo—Live!” was an empathetic classroom session that breezed along in less than 90 minutes. From the total absence of gadget beeps, the kiddie crowd was clearly too engrossed in the show to check out their usual modes of fun.

Concertus Manila’s next production is also geared for a young audience. Libera, the London-based boy choir sensation, is set to serenade Filipino fans on Feb. 16 at the PICC Plenary Hall, and Feb. 18 at the new Centerstage SM Seaside City Cebu. Visit ticket
world.com.ph or call 8919999.