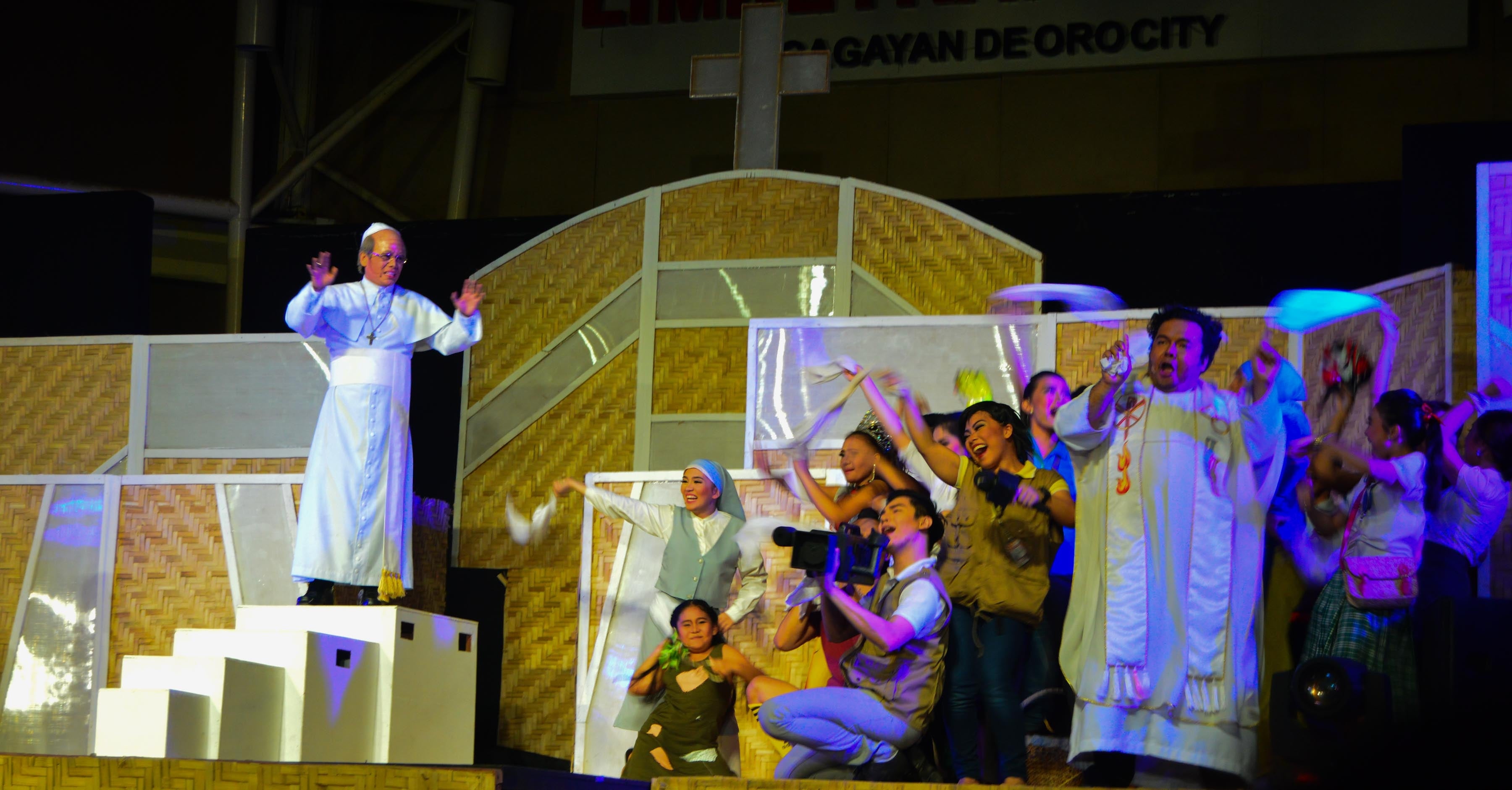 Cagayan de Oro City—While touching the lives of simple Filipinos, a musical depicting the life of Pope Francis from his youthful days to his ascent as Prince of the Catholic Church not only entertained the audience here, but also became an avenue to promote unity and peace in Mindanao.

The play, “#Popepular: Paano Kung Pinoy Si Kiko? (What if Kiko is a Filipino?),” made its run over the weekend in a city mall, with mostly students and young professionals attending.

It is scheduled to play in the cities of Ozamiz, Iligan, Cagayan de Oro, Butuan and Surigao later this month.

Its producer, the Philippine Stagers Foundation (PSF), has added “#Popepular” to the dozens of stage plays it has already created and the hundreds of performances it has mounted all over the country for a wide range of audiences.

The concept of the play is simple: Long before he was elected spiritual leader of about a billion Roman Catholics all over the world, Jorge Mario Bergoglio, as Pope Francis was known then, was just like any  other young man growing up in Argentina. He went to school, fell in love, socialized with his friends, suffered the loss of a family member and worked odd jobs.

But Jorge took a different path when he entered the seminary and eventually became a priest, dedicating his entire life to serving God.

Parallel to his struggles and sacrifices prior to his becoming Vicar of Christ, the play presents the lives of five Filipinos who, like Pope Francis, had to go through hardships and life-changing decisions. Three of them died at the prime of their lives, actualizing their respective vocations:

Joey Velasco, an artist who was recognized for his version of “The Last Supper” depicting Jesus Christ surrounded by 12 starving street children in lieu of disciples.

Kristel Mae Padasas, a Catholic Relief Services  volunteer who died in an accident when a scaffolding fell on her during Francis’ visit to Tacloban City after it was devastated by Typhoon “Yolanda” (international name: Haiyan).

Dr. Edgardo Gomez, a staunch environmentalist who fought for the protection of the country’s marine resources, particularly coral reefs.

Ronald Gadayan, a janitor at the Ninoy Aquino International Airport, whose honesty prompted him to return a passenger’s bag containing P1.8 million in cash and jewelry.

PO1 Mark Lory Clemencio, one of the 44 Special Action Force commandos killed in a firefight at Mamasapano in Maguindanao province.

Mixing elements of comedy and tragedy, “#Popepular” proved to be a hit among the audience. With the performers’ superb acting and singing, the musical hit home the message of uniting all Filipinos regardless of faith and other issues that have divided them for so long.

At one point in the play, Francis talked about lasting peace in Mindanao and called for an end to the violence and atrocities being committed against its people, be they Muslim, Christian or indigenous.

Vincent Tañada, the writer and director who also plays the papal role in various stages of the Pontiff’s life, said the show aimed not just to entertain but to spread the message of peace  and love.

JC Nigado, PSF house manager and a noted stage actor and director, said “#Popepular” is not a play about religion but about renewal of faith—regardless of one’s religious beliefs—and about uniting people belonging to different denominations.

As much as the cast and production crew of “#Popepular” want the audience to enjoy, Tañada said it was also their desire for the people to take to heart the lessons from the play.

“I hope [this play] creates a spark, and that spark will evolve into a flame that will burn in our hearts forever,” he said.