For this adventurous diplomat, a fast game of polo ‘frees the spirit’ | Lifestyle.INQ ❮ ❯ 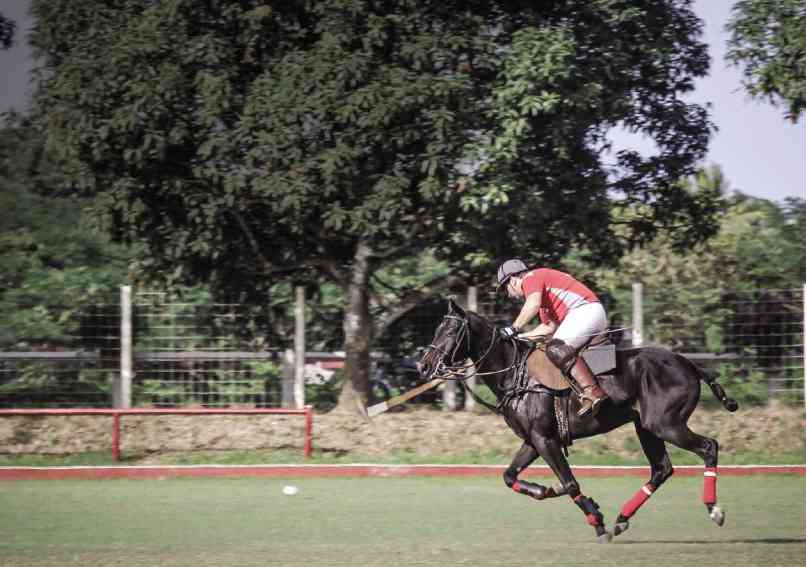 OSSOWSKI is usually assigned to the score and defense post. PHOTOS BY MICHAEL HASPER

For this adventurous diplomat, a fast game of polo ‘frees the spirit’

To German Ambassador Thomas Ossowski (pronounced “Osovski”), engaging in equestrian sport is the best way to immerse himself in a diplomatic mission.

Since the ’90s, he has galloped along the Mediterranean coast, building his endurance by cross-country riding across Brandenburg.

In the Philippines, his first ambassadorial posting, Ossowski has become a weekend polo player. His playground is the polo field owned by lawyer Pacifico Eusebio Jr. in Pulilan, Bulacan.

“Polo gives me the chance to experience normal life here. I’ve met many Filipino friends who have become like family. I get to discover the Philippines,” he says.

A career diplomat, he studied politics and international relations at the Institute for Political Studies in Paris and has served the German Foreign Office since 1992.

On his first posting as the first secretary for political affairs for the German Embassy in Tel Aviv, Ossowski took up horseback riding after visiting a horse farm. Off-hours, he rode on orange plantations and beaches. The experience was so pleasurable that he bought his own horse.

The sport took a backseat when he was assigned to Rwanda in the mid-’90s. The country was reeling from an ethnic civil war that had killed a million Rwandans.       As the deputy head of mission, Ossowski focused on humanitarian and reconstruction efforts.

“When you’re a young diplomat, these conditions seem exciting. You learn to improvise and perform in a critical environment,” he says.

Back in Germany, he again pursued his passion for horses. As a riding country, Germany presented many opportunities. There were many professional groups that offered training. During weekends, Ossowski would ride outside Berlin and ride cross-country to build stamina and refine his horsemanship.

Ossowski got into a competitive mode during his Afghanistan posting as the civilian head of the German Provincial Reconstruction Team in Kunduz in the north. He took up Afghanistan’s national sport, buzkashi, where two opposing teams of horse-mounted players vie for a goat carcass in the middle of the field and bring it to the scoring area called The Circle of Justice. The only foreigner among the players, Ossowski bravely joined the games, riding on stallions and playing rough.

Glamour on the field

After his assignment, Ossowski spent two weeks in the polo mecca of Argentina, soaking up the sport and learning from high-handicap players.

Ossowski returned to Germany, serving as deputy chief of staff of the German Foreign Minister.

His assignment in the Philippines has been exciting. As the ambassador, he accompanied President Aquino on his state visit in 2014. It was the first time in more than two decades that a Philippine president had traveled to Germany. Ossowski hopes to improve trade ties and promote more academic exchange. He adds that Germany is welcoming Filipino nurses, some 30,000 vacant positions, to serve an aging population. These overseas Filipino workers will get the same salaries and benefits as their German counterparts.

When he arrived in 2014, the envoy researched on polo in the Philippines. He has since been savoring the sport at Eusebio’s Big Ben Farm. The fields, unobstructed views, fresh air and country feeling were a welcome respite from the concrete jungle of Metro Manila.

Moreover, polo patron Iñigo Zobel invited the envoy to train with his players and ride his horses. Ossowski has engaged in some practice games at the Manila Polo Club (MPC) and has visited Zobel’s polo field in Calatagan, Batangas.

During the polo season, Ossowski watches the games at the MPC and enjoys the marching bands, live entertainment, the well-dressed crowd. On the other hand, North Polo Club games are more laid-back. Still, Eusebio always provides lechon.

Next Sunday, Ossowski is hosting the second German Ambassador’s Cup, a strictly invitational event at the North Polo Club in Bulacan. It is usually attended by close friends, the diplomatic circle and polo enthusiasts.

On the four-man team, he is usually assigned as No. 1, the attacking offensive player, for his precise hitting skills and his horsemanship.

To prepare for polo, Ossowski jogs around the neighborhood. He hits the gym thrice a week, running on the treadmill for cardio staying power and strength training, particularly for the back.

“You need endurance for the galloping, turning and changing horses after each chukker (a seven-and-a-half minute period) and hitting the ball with the mallet. The muscles need to be strengthened to avoid pain,” he explains.

The cross training is essential to burn calories from the socials. “As an ambassador, my work involves a lot of lunches and dinners. If I don’t go to the gym, I’d grow out of my suits.”

On his enthusiasm for polo, Ossowski says he finds dressage—exhibition riding—unexciting, and jumping too short. Polo is a power-packed 90-minute game that is speedy and unpredictable. The aim is to transport the ball down the field and hit the goal through the goal posts. The teams then shift directions for each goal to make up for field conditions.

“It’s a great feeling to ride very fast, with twists and turns. Your riding skills improve with the games,” says Ossowski. He adds that the player must be attuned to the string of polo ponies he rides. “Every horse will behave differently. You’ve got to know its strengths and weaknesses.   It becomes a team game for you and the horse.”

In the end, the game gives him a natural high. “Here, I’m not ambassador. I’m just a player. The game frees my spirit.”