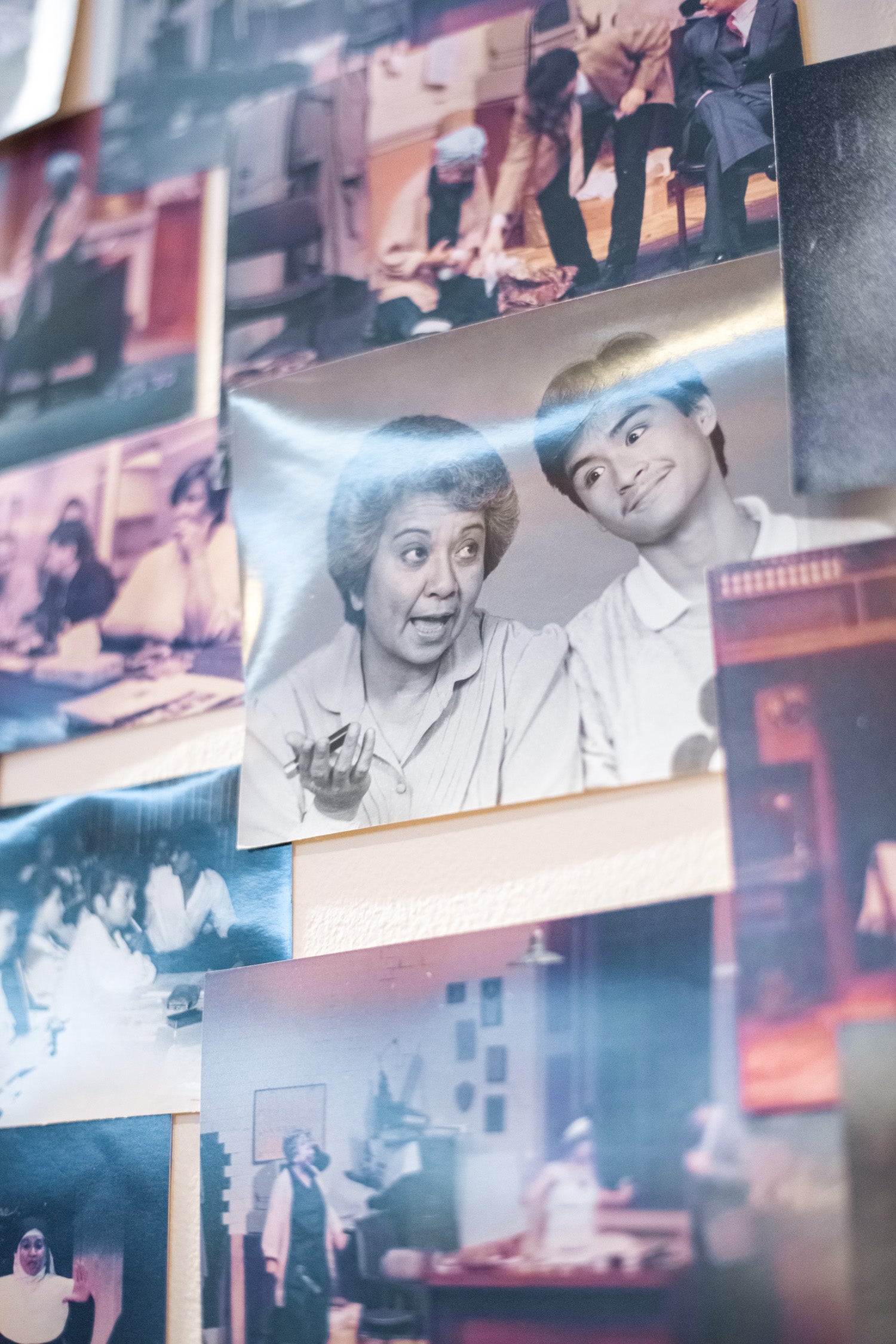 A mini-shrine to the Repertory Philippines founder at the foyer of Onstage, Greenbelt 1, with photos and memorabilia of her. PHOTOS BY JILSON TIU

Passion. It’s the one trait that colleagues and friends of the late Zeneida “Bibot” Amador, Repertory Philippines (Rep) cofounder, best associated her with.

She did nothing in half-measures, putting her heart, life and soul into her dream of building up a theater company half a century ago. That her theatrical heirs infuse that same passion into their lives is another part of her legacy. Perhaps that’s why there was more merrymaking and fond remembrances than poignant sadness during the tribute held in her honor last Feb. 7 at Onstage, Greenbelt Theater in Makati.

It would have been Amador’s 83rd birthday. The tribute-cum-reunion took place after the finale performance of Rep’s latest play, Ken Ludwig’s mystery-comedy “The Game’s Afoot.” Pinky Amador, one of the cast members and Amador’s niece, organized the event.

Joy Virata joined Rep 40 years ago, both as actress and as marketing professional, upon Amador’s invitation. Still vivid in Virata’s mind was Amador’s commitment to “building a theater industry.”

Baby Barredo was Amador’s comrade-in-arms and lifelong companion during the long struggle. Up to now, Barredo describes her cofounder as “my soulmate, my father, my brother, my sister, my best friend, teacher, director and sparring partner.”

Barredo was the “artistic force” to Amador’s whirlwind combination of administrator, business manager and creative director.

“We used to fight like crazy,” Barredo recalled. “It was always something that had to do with Rep, like which actors we were going to cast.”

Amador made sure Barredo’s creative work was not distracted by the nitty-gritty of running the company.

Amador’s discipline was legendary. Anyone who showed up a minute late for rehearsals would be quaking in their boots. Everybody better come to rehearsals prepared, ready to act at performance level, with no excuses.

“[Her temper] was a put-on,” said Pinky. “The quickest way to instill discipline then was through sheer fear. And theater
demanded that urgency. That was the style of directors then.”

Like all her aunt’s Rep prodigies, Pinky started at the bottom. The lady who would make history as one of the original cast members in Cameron Mackintosh’s “Miss Saigon” began her Rep days as a crew member, and a caretaker at that.

Miguel Faustmann, one of Rep’s leading acting lights for decades, was a humble chorus member in “Hello, Dolly.” Jeremy Domingo, who now heads his own Word of Mouth Theater Company, worked his way up as a workshop student.

“She taught me commitment to the end,” said Domingo. “Whether you are a janitor or an actor, you make a commitment and you do it well. She led by example. She ruled with an iron fist, but she taught us that it was necessary to get it done. Theater was a struggle before, but now people are doing a living out of it, and that is her legacy.”

And she was sometimes harder on her own blood, because “it could not look like she favored you,” said Pinky. “You had to earn everything.”

Faustmann said Amador was a “lovable terror.” Her sense of humor and ability to take it on the chin were other sides to her personality.

Bart Guingona, founder and artistic director of Actor’s Actors Inc., says the first time he met Amador was unforgettable.  Back in the ’80s, he was a UP college graduate who went auditioning for a Rep play. Guingona was not nervous, but the nervousness of the other performers around him put him on edge.

Then Amador asked for the “new guy.” Guingona respectfully stood up.

Guingona looked at her squarely and said without flinching, “Yes, ma’am.”

It was the beginning of a friendship rooted in professional mentoring that would last a lifetime. Guingona is directing Rep’s next play, “Almost, Maine.”

Faustmann recalled arriving one time for rehearsals really late. Expecting a tongue-lashing, the then newbie bought a bouquet of flowers usually designed for funeral parlors and held it in front of him as he walked through the Rep door.

“I was hiding behind the flowers,” said Faustmann. “And Bibot asked, ‘Sino ang namatay?’”

Faustmannn poked his head through the flowers: “I told her, ‘I was so late, and I know it’s my funeral.’ Bibot started laughing.”

She told him to come early during the next rehearsals—and ditch the funeral decorations.

Bernardo Bernardo, back in Manila after a 15-year stay in the United States, has fond memories of his friend’s generous spirit. He had acted the lead role of Albin in Rep’s “La Cage aux Folles” in 1989, among many other Rep appearances.

“I love her dearly but napakataray ng lola mo! But she’d spare me her taray during rehearsals when she knew I’d have to immerse myself in the role.”

Before Bernardo left for the United States in 2000, Amador invited him to a small gathering where she introduced him to Rep’s new actors. “I want you to meet Bernardo,” Amador told them. “He is a great actor.”

Amador’s appetite for life was infectious, said Domingo. She attacked her favorite Filipino food (dinuguan and lechon kawali) with the same relish that she dug into her treasured library of films and books.

“She was a Renaissance woman,” said Domingo. “Coming to rehearsals became a conversation about life. She encouraged that kind of passion, of relishing life. It kept—and keeps—me young.”

It is the same spirit that Rep, now on its 48th year, intends to honor and uphold. Mindy Perez-Rubio, Repertory president and CEO, promises bigger things will be in store in the next two years as the company reaches its 50th anniversary.

“We will be attracting new blood, like other directors outside of Rep; some of them may even be foreign-based, but with Filipino heritage,” she said. “Our vision remains the same—to be the preeminent theater company in the Philippines.”