Time to celebrate a wealth of art and creativity | Inquirer Lifestyle ❮ ❯ 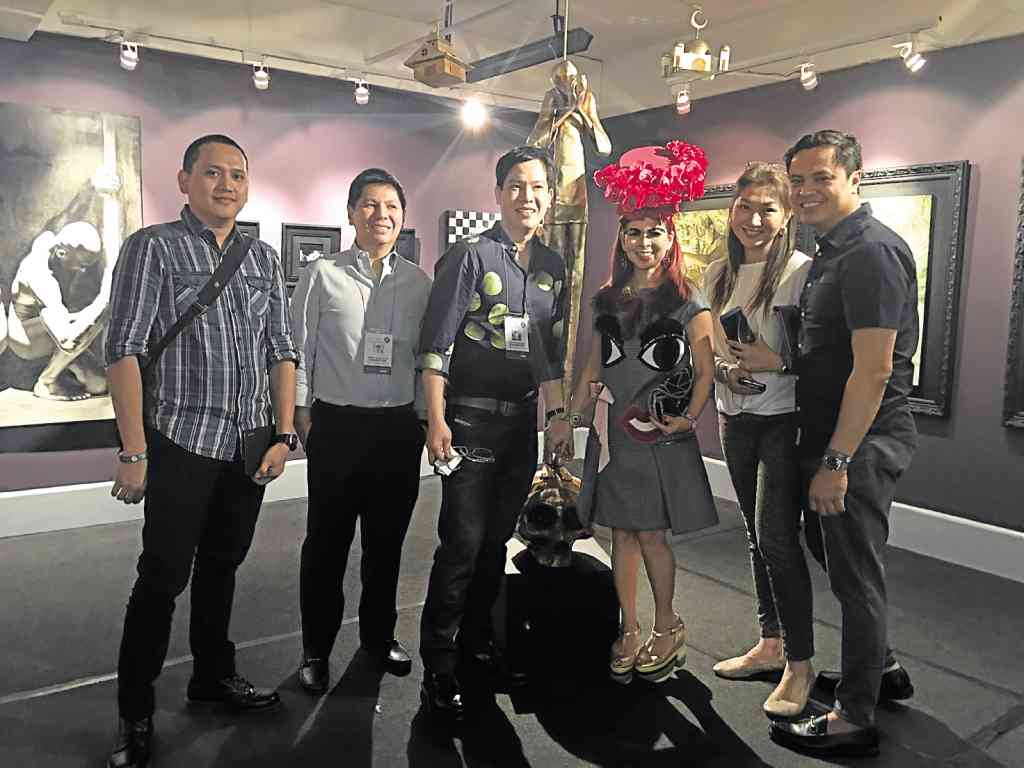 Time to celebrate a wealth of art and creativity

ART imitates life and sometimes, vice versa. At Art Fair Philippines 2016, I graced the opening wearing a Pop Art ensemble that seemed I walked out of a Roy Lichtenstein painting.

Ongoing until today, this fourth edition of the Art Fair welcomes more participants spread over two floors of The Link, the carpark facility in Ayala Center, Makati.

Taking the art scene by storm once again is extraordinary metal sculptor Daniel de la Cruz with his show called “HiSONly.” With religion taken from the Filipino devotees’ context as the main theme, the incredibly intricate art pieces capture different gestures that are totally powerful and moving. A must-see exhibit, Daniel’s craftsmanship and his deep faith are truly expressed in this unbelievable display.

Another favorite is the art installation of Justiniani who is one of the Special Exhibitors at the fair. “Infinity” is a fitting title to the series as it connotes multifaceted encounters as visitors experience his work. Using enclosed and layered screens, multidimensionality is cleverly created.

Art in cinematography is at its finest in “The Revenant”—the visually arresting film that premiered at the SM Megamall IMAX Theatre. Francis Soliven of Warner Bros. Philippines invited us to the screening; two weeks later, we enjoyed his hospitality again, watching “Deadpool.”

Derek surprised Annika with a pretty birthday cake after the screening.

Guests enjoyed a fajita buffet of steaks, shrimps and grilled chicken and a photo wall of hearts, complete with cool glasses and hashtag signboards. It was a fun movie, so catch it in theaters.

Art is also in music. Musical virtuosos, spectacular collaborations and world-class Filipino artists come together at the Malasimbo Festival this March on Mount Malasimbo in Puerto Galera, Oriental Mindoro.

Highly renowned Gong Myoung of South Korea returns after five years to the Malasimbo stage to electrify the audience. The group is known for its harmonious mix of traditional Korean and Western percussion and wind instruments.

Malasimbo will also feature Tom Thum, an Aussie beatboxer whose voice captures a vast repertoire of sounds, matched with the Manila Symphony Orchestra under the guidance of Brisbane composer Gordon Hamilton.

Malasimbo favorites such as the funky Golden Sound from Australia and Filipino percussion band Brigada will jam over the weekend with soul band Sinosikat. Local and international DJs will cap off each night with house music past midnight.

At the outdoor amphitheater’s natural landscape, the lights and dance festival will have the talents of Wolf Squared, Afro x Chrizo, Aries, Diamond Heights, and more. International DJs on the Malasimbo stage include English record producer Lapalux, French hip-hop beatmaker Onra and house and techno DJ San Soda from Belgium.

The Malasimbo Festival, acknowledged by the Department of Tourism as a prime catalyst for the country’s continued advance in music, arts and culture, is exceptional for its breathtaking venue. The festival grounds will be dotted with close to 30 installations from the country’s leading visual artists. Visit www.malasimbo.com for more information.

The Malasimbo festivals are a production of Volume Unit Entertainment and the D’Aboville Foundation, supported by Ipanema and Rider, with the participation of Brew Kettle, H&M Loves Music, Nothing But H20, and Toms; official airline partner Air Juan; official hotel partner Sofitel Philippine Plaza Manila; and official ticketing partner TicketWorld.

Art is in food. If you are unable to join Malasimbo on the weekend of March 4-6, drop by Gourmand Market by nawwTy’s Kitchen at C1 Park, Bonifacio High Street. Globe Platinum brings back this vibrant marketplace with various food and dessert stalls.

Gourmand Market brings art into food at a great price. It’s a definite go-to this March.