In ‘Constellations,’ a pair of stars on terra firma | Inquirer Lifestyle ❮ ❯ 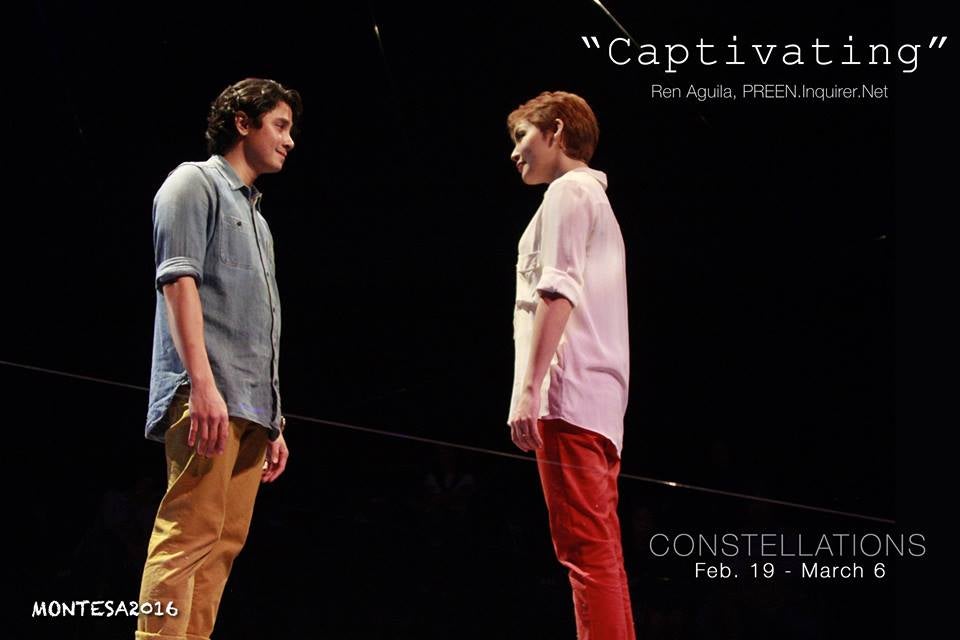 In ‘Constellations,’ a pair of stars on terra firma

Nick Payne’s “Constellations” is not in any way about stars, those distant specks draped across the night sky. But in Red Turnip Theater’s mesmerizing, flawlessly executed production of this play, they are front and center of it, and in glorious human form.

Their names: JC Santos and Cris Villonco, who play Roland the beekeeper and Marianne the physicist, respectively, in Payne’s two-hander about love and loss in the multiverse.

Trying to capture in precise words their performances, one realizes it is an almost futile exercise in reaching for new superlatives; but, really, it’s never too early to dish hosannas out in generous dollops when the acting is as transformative and moving as the kind Santos and Villonco are turning in in this Red Turnip season closer.

In fact, consider yourself (hashtag) blessed if, by year’s end, you’ve encountered a more spectacular pair of career-defining performances onstage.

In “Constellations,” Payne has woven the potentially alienating mumbo-jumbo of higher physics into a love story, exploring the idea of multiple universes, of multiple possibilities and outcomes existing simultaneously, against the backdrop of the commonplace boy-meets-girl setup.

The idea it posits is that anything—from the weather down to one’s choice of clothes and words—can, may, and will affect any given situation.

The play illustrates this theory by telling the grand romance of Roland and Marianne in linear fashion, but with scenes repeated or told from various perspectives.

Thus, for example, Roland’s wedding proposal to Marianne, a speech involving honeybees—something I suspect married nerds would wish they’d have written—unfold in several versions, set apart only by how he actually delivers it (in one scenario, he even forgets the script at home and decides to just wing it).

A confession of betrayal halfway through is explored in varying degrees of fear, anger and dejection. At one point, the playwright even imagines them as a mute couple, conversing through sign language, and the effect is magical.

In a way, then, what Santos and Villonco are doing here is something akin to a higher form of acting acrobatics. They’re each not playing multiple characters, but variations of a single character—which, if you really think about it, is an even more grueling, mind-numbing ordeal.

That their efforts emerge as consummate unions of nuance, subtlety, tone and body language, never overdone or once straying into self-indulgent territory, is this production’s most important triumph.

The director is one of Red Turnip’s founders, Rem Zamora, and it is thanks to him this “Constellations” remains, as the text necessitates, a show of marked intelligence, emotional depth and humanity. At 70 minutes, it may seem a breeze, and its cerebral specifics may be off-putting to some, but one would do well not to underestimate the irresistible qualities of this production.

On Ed Lacson Jr.’s set, Zamora choreographs a thespian dance of the highest order, in which the actors shift from emotion to emotion, scene to scene, in rapid succession as the script demands—no false notes dropped, and not a hint of strain or struggle.

Villonco’s is the showier role, and is a stunning display of her tremendous range.

Santos’ requires more understatement, but it is the maturity he endows the character little by little as the hour passes that’s most noteworthy.

Lacson’s design is itself a vision of imagination. What may at first seem like a bland installation of carpeted polygonal boards on bases painted black conjures an illusion of infinity once the metaphorical curtains go up. In the darkness, the carpets absorb all the light, the illumination provided by the ever-reliable John Batalla, and suddenly the boards become terra firma floating in the limitless expanse of space.

On these islands, in the midst of the universe, Villonco and Santos are just two people falling in and out and in and out of love. If you look just a little bit closer, you can even swear they emanate a glow of their own: two of our finest actors absolutely slaying it, to use the millennial expression, in a production that’s second to none.

If there’s any doubt before, there shouldn’t be any now: genuine stars, both of them are.