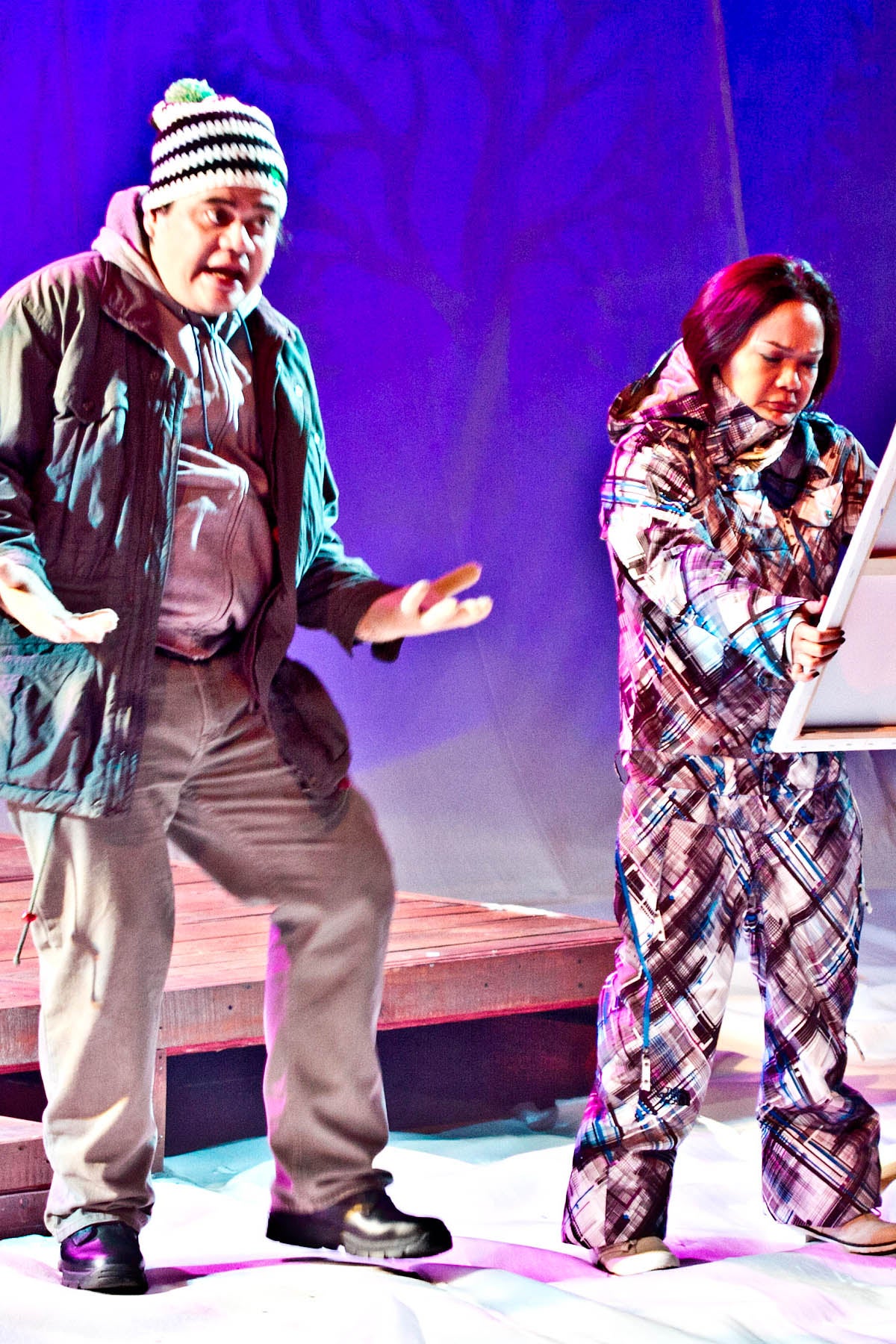 “Mythical… sometimes fantastical” are the words that director Bart Guingona uses to describe Repertory Philippines’ new production “Almost, Maine” which opened at the Onstage Theater in Greenbelt 1 on February 19.

Set in an imaginary town of Almost in the state of Maine, USA, nine unusual love stories unfold. Four actors play the different characters of each story.

“The stories are mythical, yet real— simple, yet profound” says Guingona.

“John Cariani, the playwright, takes a cliche and turns it over on its head by making it literal,” he adds.

“Almost, Maine” is a gentle, funny, play involving real people dealing with affairs of the heart. “Cute will kill it” warns the author (himself an actor) and the actors play their parts with complete truth letting the strangeness of the characters, the dialogue, and the absurd situations create the comedy.

“I had a hard time choosing the cast,” Guingona says.

“Almost, Maine” is an acting bonanza and many actors read for it. Many were good but I had to mix and match ages, physical appearances, and types,” he adds.

This is understandable since the actors play different characters and interact with one another in different ways in the different stories that seamlessly blend into each other.

Finally four Repertory Philippines’ veterans were chosen. Jamie Wilson (recent Aliw Awardee for his work in “Run For Your Wife” and part of Rep’s retinue of actors since he was eight); Reb Atadero, (“The Graduate,” “Altar Boys,” “Sweeney Todd”); Caisa Borromeo (“The Secret Garden,” “Little Women”); and Natalie Everett (“The Secret Garden,” “The Game’s Afoot”).

“They have good chemistry” says Guingona who, according

to his actors, gave them the freedom to create, to take chances, to be courageous, to “mess up”, and finally to “eliminate all of the wrong and discover the right.”

Their task was to create different people, living in the same small town, on the same day, taking different spiritual journeys.

“It was daunting” they agree and they approached their roles with a certain element of fear.

Yet they found it exciting as well. They enjoyed the humour, the surprises, and the many magic moments — often irresistably laughing themselves as they watched or rehearsed each story.

February is Valentine’s month. “Almost, Maine” offers lovers of all ages and stages the chance to celebrate it with a feel-good play that is funny, heart warming, and that focuses on the best of human nature.

“Almost, Maine” plays Friday and Saturday evenings at 8 and Saturday and Sunday matinees as 3:30 until March 13 at the Onstage Theater in Greenbelt 1, Paseo de Roxas cor. Legazpi St., Makati City.

For tickets and reservations call Repertory Philippines at 8433570 or Ticket World at 8919999. For information about the play log on to www.repertoryphilippines.ph or visit REP’s Facebook page. Ticket prices range from P400 to P800. TVJ