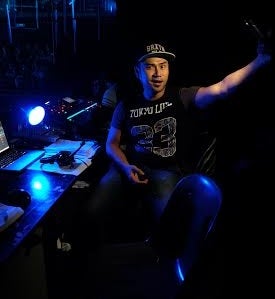 It started with a joke.

He had no idea that they took his quip seriously.

“Pinag-meetingan pala nila. After a few months, they told me, ‘Let’s go, let’s do it.’”

They asked him to be the show’s musical director and arranger. “The first time I worked with Direk Maribel was on ‘Care Divas’ (where he played Faraj) but, after that, I did a lot of side shows at Peta, producing music for them. I also scored Maribel’s first feature film sa Cinema One Originals, yung ‘Melodrama Negra.’”

Although he had experience as a music producer, scoring films, working on albums including some for his own a cappella group Akafellas and arranging songs for other artists, creating music for a full-length musical was something Salomon had never done before.

“I was excited, I was pressured,” he recalls.

Salomon, who first discovered his passion for music in third grade, never had any formal music training.

For the incredibly successful “Rak of Aegis” which has had four runs and which will have another rerun in June, he had to reimagine the songs of the Pinoy rock band Aegis to help tell the story of the flood-submerged Barangay Venezia, a tale written by Liza Magtoto.

The process was very collaborative, he says.

“For me, the formula is working with people you know how to work with, people you can discuss anything with. You need to be able to prove and disprove each other. Para sa akin yun ang tunay na collaboration.”

He creates the music in his own home, letting the work take over his world.

“It consumes my life, actually. It consumes my brain, my heart. Lahat. I just don’t tell people but it consumes me a lot. I don’t have fundamentals, influences or rules. I arrange through feeling it. Mabigat siya. Hindi siya mahirap, masaya siya gawin, pero mabigat.”

Sometimes, while on a night out with friends, an idea hits and he has to abandon them.

“Sh*t, kailangan ko umuwi, may naramdaman ko. Ganun. Iiwan ko sila in the middle of something. Or magre-record ako at magsusulat ako.”

He always makes sure he has a recorder and notebook with him, sometimes working even as he sleeps.

Salomon, who first started acting in high school in La Salle’s Cue Drama Club and then Repertory Philippines, left theater behind for a number of years to pursue his music career.

In 2008, on his way to a gig in Nueva Ecija with the Akafellas, Myke got into a major accident that shattered his knee.

“Head-on collision sa highway. Kung wala yung seatbelt ko, lumipad ako palabas ng van. It was a second life. So I decided to do more things. Para siyang batok eh. When I was younger, I was afraid of doing things on my own but I decided to venture out. Second chance na yun eh.”

He got his second shot at theater in 2010 through Spotlight Productions’ Robert Seña who approached him in the gym one day and handed him a CD.

“Sumugal sila sa akin. I owe it to them,” he adds. Since then, he has never stopped acting for different theater companies.

Salomon believes that being an actor and singer helps him as a musical director.

For “Rak of Aegis,” where he also played Kenny, he had to juggle being a musical director and actor. But, “Ang maganda dito eh buong cast ay kilala ko na. It was like working with my family, ang dali nang kausapin. May mga invisible line for friendship and professionalism. We can comment on each other.”

Salomon is also the musical director and arranger of “3 Stars and a Sun,” which runs at Peta until tomorrow, March 6, Francis Magalona’s death anniversary.

“Noel Ferrer wanted to do a tribute for Francis M na musical. He wanted me to do the music. He asked me, find a director and writer so you can do the music. Sabi ko, ‘Why don’t you ask theater companies to pitch an idea or a storyline?’ So nilapitan nila yung Peta.”

Salomon had known Magalona and even created a cover of “Kaleidoscope World” the day the master rapper passed away. But the work required for “3 Stars and a Sun” proved to be more complicated.

Again, he began with the script, this time a dystopian tale written by Rody Vera and Mix Villalon.

The musical, which will be staged at the Music Museum and which Salomon says will star Robert Seña, Ricky Davao, Michael Williams, John Arcilla and Nonie Buencamino, will feature original songs and jukebox hits.

Asked which other artists’ work he dreams of turning into a musical, he says, “Itchyworms! Ang ganda ng album nila eh. Noontime Show, it’s calling for a musical. Tsaka Rico Blanco. I want him to make it a musical. Naiimagine ko yung mga kanta niya in a musical.”

His love for theater sometimes means having to turn down more lucrative projects, but he doesn’t mind.