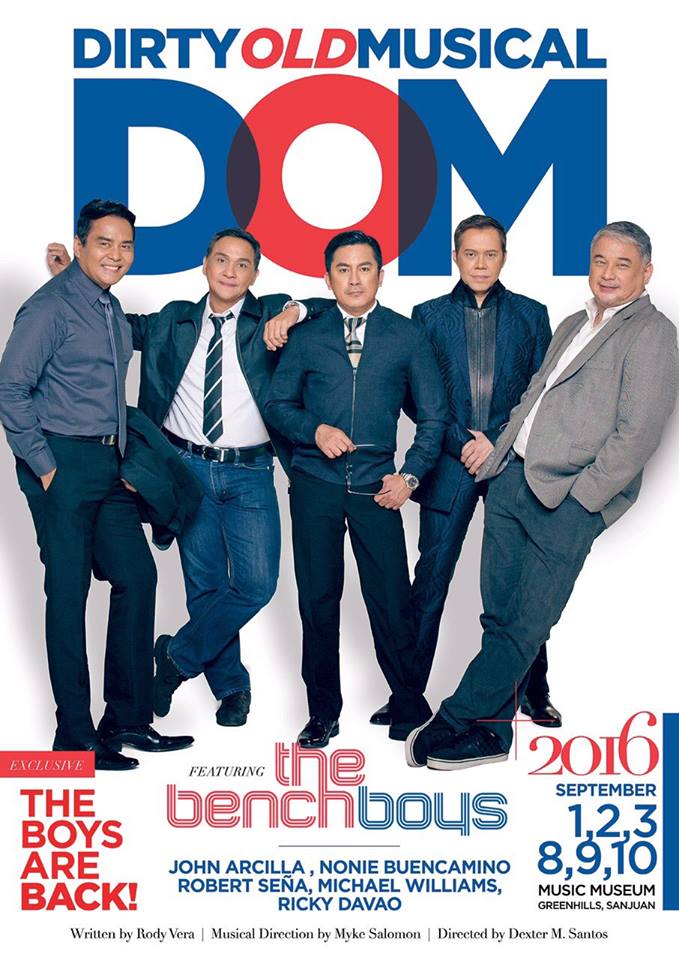 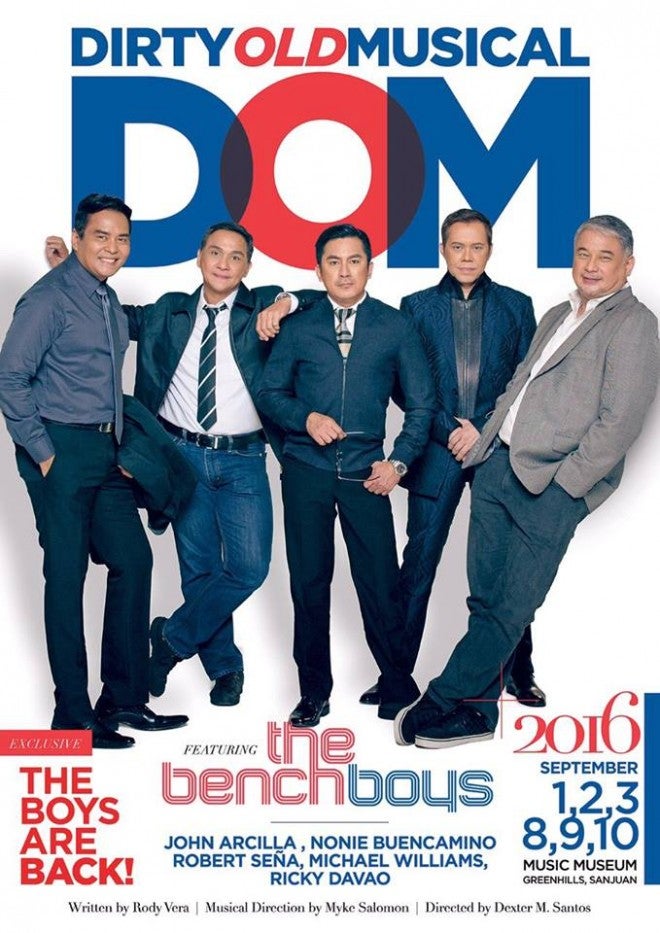 Spotlight Artists Centre, the theater company founded and run by the husband-and-wife team of Robert Seña and Isay Alvarez-Seña, has announced that its next production will be “Dirty Old Musical,” an original Filipino work to be headlined by a powerhouse cast of topnotch actors in film and theater: John Arcilla, Nonie Buencamino, Michael Williams, Ricky Davao and Seña himself.

“DOM (Dirty Old Musical)” is slated to run Sept. 1-10 at the Music Museum, under Dexter Santos’ direction. The libretto is by Rody Vera, with Myke Salomon as musical director.

Salomon is also the award-winning musical director behind the Peta hit musicals “Rak of Aegis” and “3 Stars and a Sun”. In an interview with this paper last week, he revealed some information about “DOM”, the idea of which he said he had pitched to Seña.

It’s a casting feat to have Arcilla, Seña, Buencamino, Williams and Davao—five of the most accomplished performers around—in one show.

Arcilla, of course, is best known these days for his starring role in the blockbuster film “Heneral Luna”, though he had cut his teeth for years in plays and musicals as one the original members of the Actors’ Company of Tanghalang Pilipino, the resident theater company of the Cultural Center of the Philippines.

Buencamino, a batchmate of Arcilla in the Actors’ Company, is a much-praised actor of singular versatility who has appeared in a wide variety of mediums, from theater and film to TV and even dance. He was last seen onstage in Red Turnip Theater’s “Time Stands Still”.

Seña and Williams were two of the original Filipino cast members of “Miss Saigon” in 1989. Seña appeared in musicals such as “Magsimula Ka”, “Katy” and “Rama at Sita”, while Williams was a Repertory Philippines mainstay with acclaimed turns in the local stagings of “Les Miserables”, “Kiss of the Spider Woman” and “Man of La Mancha”, among others.

Davao has also appeared extensively in film, TV and theater, in the latter headlining such productions as “Larawan, The Musical” (as Tony Javier) and two Mario O’Hara masterworks— “Insiang” (the stage version) and the contemporary sarsuwela “Palasyo ni Valentin”.