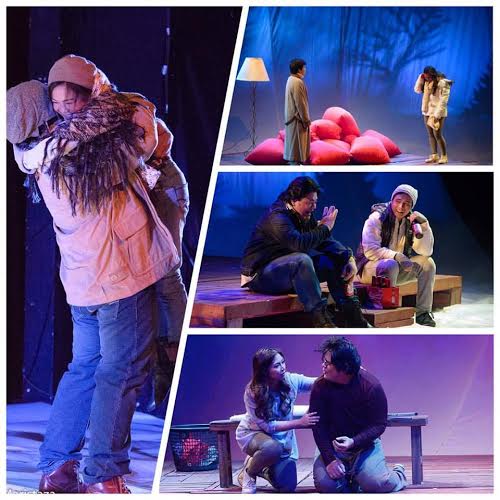 Almost, Maine, the titular quaint and fictional town in Repertory Philippines’ latest production, supposedly lies in a murky boundary between the US and Canada. People have a hard time finding it on the map, but almost everyone has a vague recollection that  it’s “out there.”

It seems shrouded in an eternal, if cozy, winter that traps its small community in a very small space, making it the perfect place for emotional derelicts who avoid issues to be forced to confront them and one another.

The issues and baggage that bog down the cast of characters are undoubtedly serious, but the beauty of John Cariani’s whimsical script lies in the light treatment that nevertheless does not diminish their importance.

Nine stories, independent of each other and yet come in full circle at the end, are acted out by a small but captivating ensemble (Reb Atadero, Caisa Borromeo, Natalie Everett and Jamie Wilson). Lonely souls bump into their lost loves, strangers fall in love within minutes, and embattled couples try to keep their failing marriage together.

What could have been soap opera material becomes a gentle, witty exploration of the nature and different nuances of love. Cariani lifts a page from the magic realism of Gabriel García Márquez and mixes it with the softer side of Rod Serling to bare each character’s soul and drive home the point.

The minimalist production design features an almost bare stage and a stark wintry look that reflects the unexpressed lonely spaces each character is inhabiting. But all it takes is a few dancing lights that herald the coming of the aurora borealis, or sudden shifts in setting and mood, to make the audience feel that a surprise is just around the corner.

The turn of affairs may be euphoric or disastrous, ending in a character’s pleasure or pain, but that unpredictability is at the heart of the wonder that makes “Almost, Maine” a special place and a special play.

Director Bart Guingona reins in his trademark intensity to let his characters and their stories slowly unfurl. Their fears, hopes and joys arising from a lifelong yearning for connection inch their way out of the characters’ inner selves. The players in “Almost, Maine” grope for words as determinedly as they would walk on a road covered with snow; identifying their feelings and their desires is tremendously difficult and occasionally funny, but ultimately necessary if they are to cross to the other side and reach home.

Each of the four actors plays three to four characters in the nine stories. Given Guingona’s restraint, they create a wonderful balance throughout their characters’ journeys; a momentary stray step into exaggeration or underplaying would have jolted the play out of the elegant sense of balance that accounts for its poignancy and sense of mystery.

And if words and actions fail, Cariani’s magic-realist elements take their characters—and the audience—one more step into their journey.

In “Her Heart,” Glory (Everett) literally carries in a small pouch the broken shards of her heart while she tries to make do with herself and her memories. “Getting It Back” has Borromeo’s insecure girlfriend literally measuring the love of Atadero’s loyal beau in sackfuls meant to contain the feeling.

In “They Fall,” two macho blue-collar workers (Wilson and Atadero) crash into the icy ground, not only as prisoners of gravity but also as an echo of their reluctant but growing attraction for each other. And in “Where It Went,” probably the clue to end all clues in the dying marriage of a middle-aged couple (Wilson and Everett), has the other shoe literally falling from the sky at just the right time, when silence is the only course of action that can stop the pain.

Almost, Maine, the town, has no easy answers for its residents, only the magic that can hopefully push them in the right direction as they unravel the complex layers of their relationships.

And in “Almost, Maine” the play, the sweet, sly create the magic that makes the trip for the audience equally well worth taking.