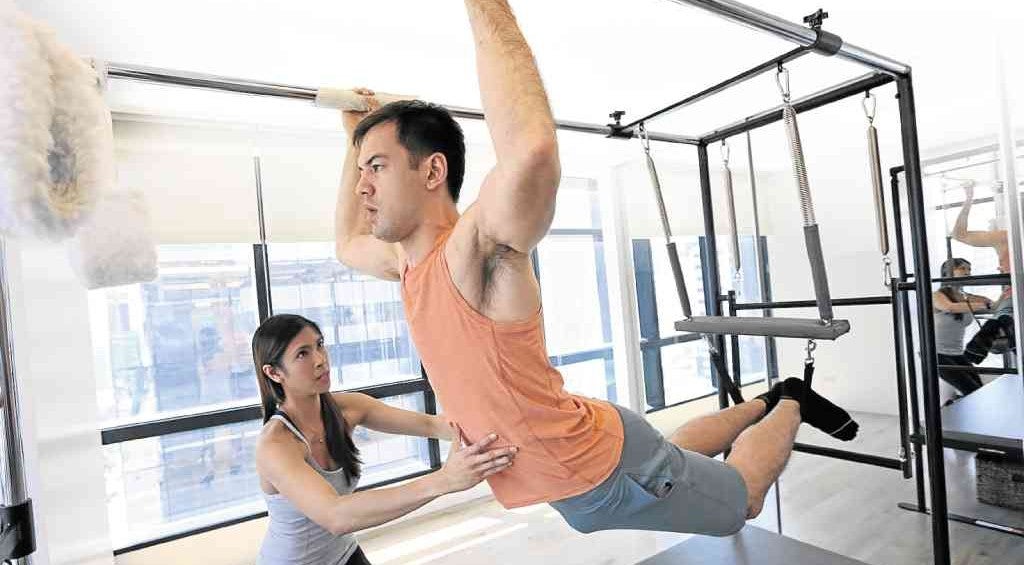 SEAN Anthony, the 6’4” Canadian-Filipino pro basketball player of the NLEX Road Warriors, was playing peek-a-boo with his six-month-old son Alexander Ace on the couch.

Anthony, who tied the knot with art curator, model, TV host and yoga instructor Teresa Herrera two years ago, is now the happy father of this little bundle of energy. And suddenly it hit him, like it does most new dads, that he now wants a longer career.

What does an athlete—one whose body endures injury after injury, who goes home sore, sometimes even bruised—do to ensure longevity?

Anthony felt he needed a yang to his yin. That meant enrolling in Pilates, a physical fitness system that promotes efficient movement through muscular control, balance, endurance and strength.

“I was really attracted to the strengthening aspect of Pilates,” he said.

Today Pilates is no longer just something women do when they’re not sweating it out in the yoga studio. Real men are into Pilates, too.

In the United States alone, basketball teams like the Orlando Magic, New Jersey Nets, Tampa Bay Buccaneers and Detroit Lions have incorporated a Pilates regimen into their workout.

Pilates, developed by the German physical trainer Joseph Pilates, is anchored on a simple philosophy—movement heals and strengthens the body. It’s a system of exercises executed with or without specialized equipment that targets five muscle groups: core, inner and outer thighs, glutes and back, collectively known as the “powerhouse” of the body.

It was Anthony’s wife who introduced him to yoga when he complained about tight muscles after basketball practice.

As he performed some routine yoga stretches, he noticed an almost instant relief.

A graduate of physical education at McGill University (“I have done my share of spending hours with a cadaver to analyze the muscles and its origin and functions”), he needed only some quick Internet sleuthing to learn about Pilates.

It was great, he thought. His wife was also taking some classes herself at the Vivian Zapanta Pilates Studio in Bonifacio Global City. It took only one session for Anthony to be convinced that Pilates perfectly complements basketball.

“Basketball is a super pounding sport. You jump, you fall, you get hit… You have all these banging bruises, stiffness and tightness. Pilates can isolate my movement so well that my injured joint won’t get hurt. It strengthens the surrounding muscles without actually doing any hard work on the joint,” he said.

Pilates and yoga are similar in that both require mindful practice. Yoga, however, is more meditative and anchored on its spiritual roots. Pilates is about dynamic movements, while yoga poses may be held for several breaths or minutes.

Pilates also has specialized equipment, such as the Reformer or Cadillac, that assists with alignment and support, or increases the intensity of the exercise.

“It’s good that I can relate to my instructor in terms of anatomy and muscle groups and functions, but sometimes you need someone to tell you that what you’re doing is not right. You don’t realize the little movements, so you don’t know that you’re already compensating. It helps a lot to have an instructor to pick up the points that you don’t see,” he said.

Pilates is also an excellent tool for preventing or rehabilitating injuries while increasing flexibility.

It strengthens the often neglected muscle groups, strengthens the smaller muscles, tendons and ligaments that protect the joints, and helps reinforce stability in the core.

The result is better posture and overall balanced body strength because imbalance occurs when people do the same exercise over and over so that distribution of strength is not equal, resulting in injuries.

“Here you not only have stretching but also posture and core, and learn the proper firing of your body,” Anthony said.

At the core of Pilates, for example, is a strong emphasis on proper, thoracic breathing, where you learn to breathe in and out through the diaphragm and abdominal cavity.

When you master this breathing technique, your lung capacity improves, and that’s a big deal for competitive sports. This, in turn, strengthens the core and stabilizes the spine.

“You need to have a strong core when playing, like when you’re battling for a rebound. It’s a very physical game,” he said.

Aside from cross-training in Pilates, Anthony has regular strength-training workout and athletic training for his sport. After preparing the family breakfast in the morning, he hits the gym for weight training, then practices for a couple of hours, then does extra shooting after practice before going back home to his family for some playtime with his son. His evenings are spent mostly on managing a few businesses.

“It may look like we get to spend more time with our families than the regular guy, but we work six days a week, too,” he said. “And we don’t get weekends because that’s when we play. There’s the positive and negative side to both situations, but being a pro athlete is an amazing dream come true.”

His son Ace is quickly picking up his dad’s habits. One time, Anthony said, he rearranged Ace’s toys. When the time came for Ace to play, he went through the pile and picked up a basketball.

Ace also started crawling a month earlier than babies his age, and is very tall.

Anthony is well aware of the subconscious message he may be sending to his son, so he tries not to get overly excited about the boy just yet.

For now, Anthony’s goal is to stay in his game for as long as he possibly can, and for his son to pursue any career that will make him happy.