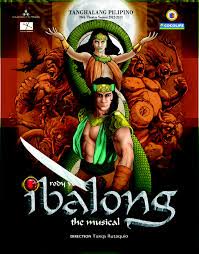 Musical ‘Ibalong’ goes back to its Bicol roots

Through the Bicolano epic “Ibalong,” as reinterpreted and reimagined in song-and-dance form by Tanghalang Pilipino (TP), the resident drama company of the Cultural Center of the Philippines, Bicol can share with other regions how Bicolanos can rise above tragedy, says Legazpi City Mayor Noel E. Rosal.

He spoke at a recent press conference in Aristocrat Restaurant in Manila to announce that the TP production “Ibalong, The Musical,” first presented in Manila during the 2012-2013 theater season, will be the highlight of the 25th Ibalong Festival in Legazpi come August.

“Ibalong, The Musical” was written by Rody Vera and directed by Tuxqs Rutaquio, with Carol Bello as composer.

During the press launch, songs and duets from the play were performed by singing actors Remus Villanueva, Delphine Buencamino, Jonathan Tadioan and May Bayot.

Briefly, the epic concerns the hero Handyong and his band of warriors who come to Ibalon (the old name of Bicol), and wage war against beasts and monsters who are ravaging the land. In the process, they bring civilization to a remote, untamed land.

As interpreted by Vera and Rutaquio, in a production acclaimed by National Artist for Literature Bienvenido Lumbera, the story was updated to bring to the fore environmental problems like typhoons, floods and climate change.

“This was just an excerpt,” said Vera. “The complete epic cannot be found, so I chose an excerpt which excited me. That is how an epic is, I believe—as long as it is in the consciousness of the Bicolanos, there is that great, enduring connection to their experience.”

Rosal recalled that Typhoon Reming had devastated Legazpi in 2006, but the people were resilient and managed to survive.

“We can help other regions,” he said. “We can share how Bicolanos were able to solve their problems. The epic reflects the history, the culture of Bicolandia, but it is an inspiration not just to Bicolanos but to other Filipinos. Tanghalang Pilipino was able to come up with something everybody can relate to.”