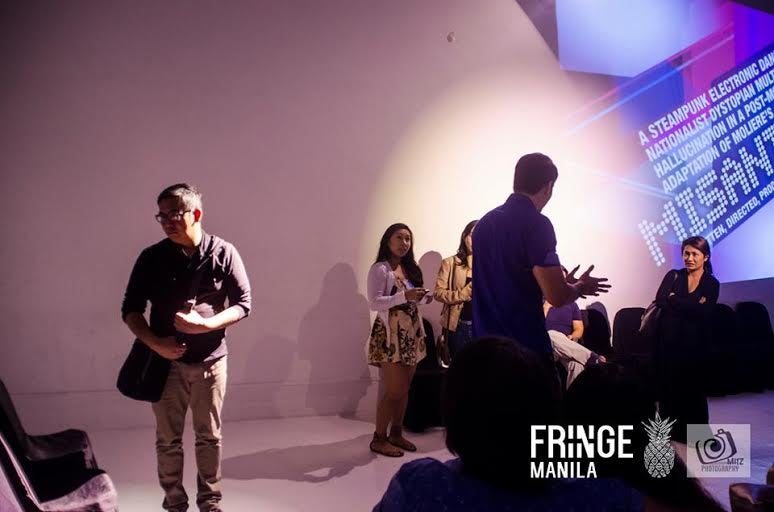 The urge to take a bath after watching “Schism” was strong. It’s a dirty play littered with disgusting people, though you wouldn’t know it if they only kept quiet. Get one foot out the door and chances are, they’re probably stabbing you in the back already.

It’s another swarm of odd theatrical creatures George de Jesus III has created for “Schism,” his second play under Egg Theater Company to premiere at Fringe Manila. But while his first, “Maniacal,” featured characters that more strongly adhered to stereotypes—the temperamental diva, the famous film import, the delusional actress—those distinctions were no longer as vital in “Schism.”

Dropped to a minimum, too, was the name-dropping that made “Maniacal” a laugh-your-heart-out, leave-no-prisoner-alive satire of the current theater industry. Instead, the people in “Schism” lived in a nest of gossip and lies, like serpents slithering between truth and untruth, the spoken and unspoken.

Maybe it’s because we’ve grown accustomed to a world where it is easier to pretend, to be dishonest, to be “kind”; where shoving aside hard truths in favor of artifice is considered socially normative; where being nice is what everyone expects from everybody else.

Only the character of the playwright Alex, embodied with moving vulnerability and transparency by Tuxqs Rutaquio, begged to differ. And because he actually had the balls to do so, the whole universe, as it were, conspired against him.

Everybody else around him—a first-rate ensemble that featured such fine turns by Angeli Bayani, Chinie Concepcion and Jojo Riguerra—dared not speak or walk the truth.

And when the dust had finally settled, the question De Jesus had been asking throughout those 90 minutes of tantalizing tittle-tattle rang even louder: Is it all worth it—standing up for what’s morally right and turning oneself into a social pariah, isolated on the other side of this “schism”?

Two other works made their respective marks in this year’s Fringe Manila, which, it must be said, arrived in a package so thin, transient and truncated, it hardly registered on the cultural barometer.

ADHD Productions’ “Titas of Manila” called to mind their previous entry, “Kwentong Komyut”: Both utilized the five-short-plays-in-a-play format to flesh out a singular theme.

“Titas of Manila,” which enjoyed a sold-out run, obviously took inspiration from the Twitter account of the same name, itself a parody of that middle-aged female relative who thrives in pointing out how fat you’ve become, or that you’re still single after all this time.

We can do without delving into the finer points of the word “tita,” its regional and social contextual implications. “Titas of Manila” was, on the whole, a fresh, insightful piece from a refreshingly new player in the theater scene.

Sure, some segments were better written, and better acted, than others. And Jethro Tenorio’s direction didn’t exactly manage to fine-tune all five sketches into the same plane.

Yet, it gave us “Forever Young” by Dolly Dulu (who also penned the best chunk of “Kwentong Komyut,” about a quirky pair of ex-gay lovers on their way to a Halloween party).

True to its title, “Forever Young” was about the young-at-heart tita, the one who’s taking the world by storm through Zumba and her choice of boys, the one who’s had enough of dreary marriages and cheating husbands and cheap divorces.

More than anything, however, this segment was a pleasant reminder of why theater festivals like Fringe and the Virgin Labfest are vital to the industry, if only because they serve as launching pads for raw, untainted talent.

In the case of “Forever Young,” it was the potent combination of Dulu’s snappy, unpretentious writing, and a blazing performance by Trency Caga-anan, she of limitless spunk and fiery sensuality, that all but assured her a spot in our theatergoing maps.

‘We Choose to Go to the Moon’

There were no standout performers in Vladimeir Gonzales’ “We Choose to Go to the Moon,” produced by Project Mayheim Productions, and that could only be because its cast cohered so seamlessly to produce a work that tickled the mind and never really left it.

Directed with flair by Fitz Edward Bitana, “We Choose to Go to the Moon” was a searching, intelligent piece on sexual and emotional connection told through the (interconnected) lives of strangers.

It wasn’t always an easy watch: Particularly during the first act, the feeling that one was inside someone else’s mind on a burnout daze was hard to shake off. But whoever said connecting to another person on any level is a walk in the park?

What gratification is there to be had in paying for sex? How far can one stretch the heart before a long-distance relationship starts tearing it up? What has become of this generation, where smart phones are now metallic extensions of our limbs?

The questions and ideas ran aplenty across the sprawling fabric of modern-day ennui wrapped around “We Choose to Go to the Moon,” and that the answers did not always arrive immediately could only be reason for this production to experience a rebirth. This show, as it was, deserved it.

“Schism” ran at the Pineapple Lab in Makati City and will be back in September this year. “Titas of Manila” and “We Choose to Go to the Moon” both played the Cultural Center of the Philippines Tanghalang Huseng Batute.