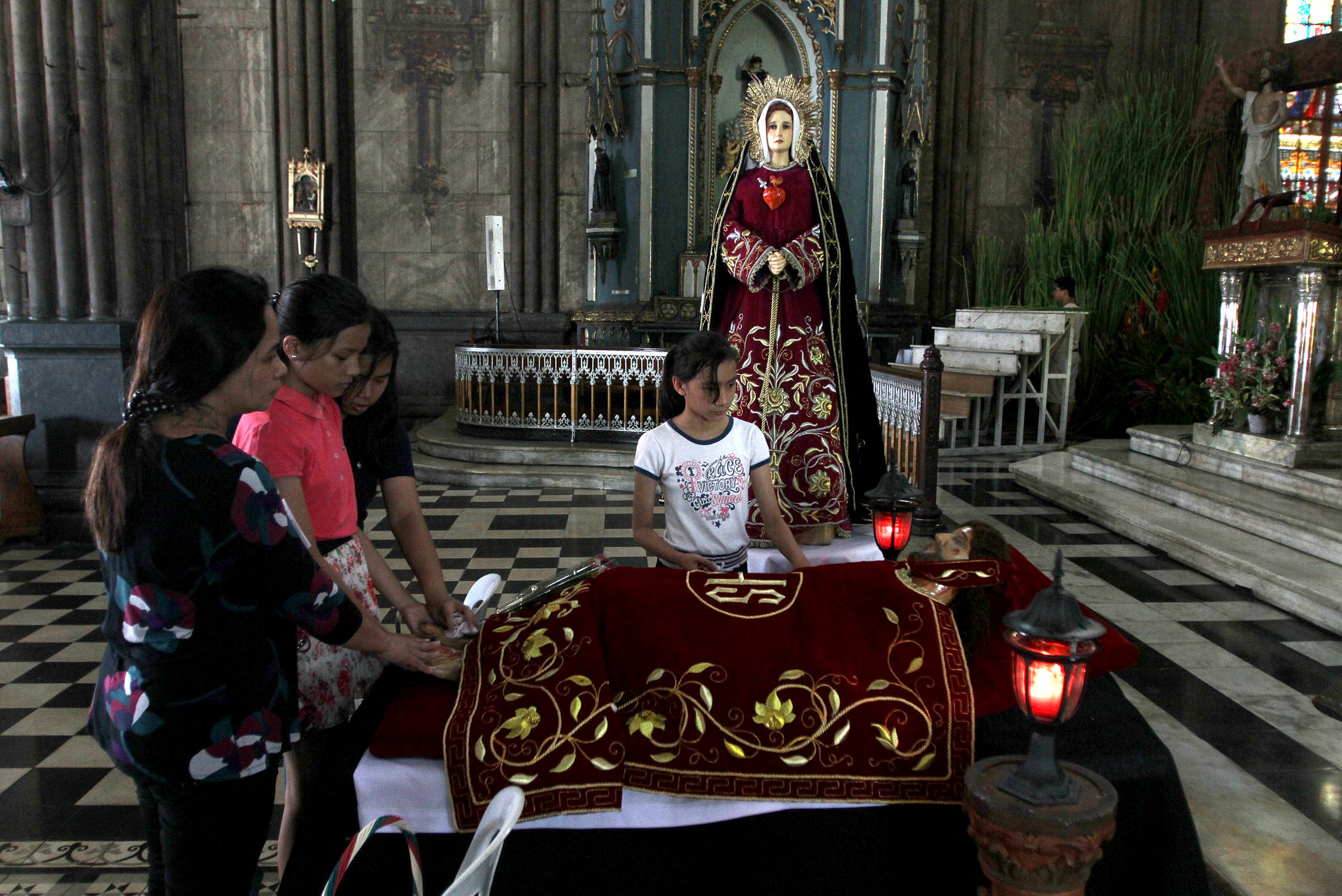 Visita Iglesia (Church Visitation) is one of only three festive occasions during the Holy Week, with Palm Sunday and Easter.

Following the Last Supper, the faithful also have their convivial meals, eating and drinking and visiting churches on Holy Thursday, in preparation for the next two days of deepest mourning.

This Lenten practice can be traced to medieval times, when pilgrims would visit the seven basilicas of Rome as penance on Maundy Thursday.

After the Mass of the Lord’s Supper, the Blessed Sacrament is placed in the tabernacle and exposed on the Altar of Repose for the faithful’s silent adoration.

The church is left open till midnight in response to Jesus’ request to His apostles to stay awake with Him during the Agony in the Garden.

To many, especially the young, the journey of visitation is a chance for sightseeing, people-watching and socializing (like Misa de Gallo at Christmastime).

This should also be a chance for them to imbibe culture and history, as many of these churches are redolent of our colonial past.

By the time the Spaniards brought the tradition of the Visita Iglesia to the country, the number of Rome’s basilicas corresponded to the seven churches of Intramuros.

They were razed to the ground by the bombings of the Pacific War, except one.

For a Visita Iglesia itinerary in Metro Manila, we cite among the most beautiful, most culturally and historically significant structures in the country. Here is a centrifugal listing of the 14 most outstanding churches in the Ecclesiastical Province of Manila covering the archdiocese and its eight sub-dioceses:

This is the oldest church in the country. The present structure is the 1607 reconstruction. Built of solid adobe blocks, it was the only building left standing in Intramuros after the war, relatively intact.

It has an extensive museum of ecclesiastical art and historical artifacts. Among its most notable features are the trompe l’oeil architectural details of its walls and ceilings, and the lavishly decorated pulpit.

This was the venue of the first National Synod in 1581, and the drafting of Spain’s surrender to the Americans in 1898. It contains the remains of the founder of Manila, Miguel Lopez de Legazpi.

It was declared a World Heritage Site by United Nations Educational, Scientific and Cultural Organization (Unesco) in 1993.

Seat of the archbishop

What we see is only 58 years old, the result after eight times of reconstruction. Yet it doesn’t fail to strike awe for its massiveness, spaciousness, arches, rose window, vaulted ceiling.

It is the country’s prime basilica and the seat of the archbishop.

Minor Basilica of San Lorenzo Ruiz, or Church of Our Lady of the Most Holy Rosary, Plaza Lorenzo Ruiz, Binondo, Manila; 1596; Baroque

Since the Chinese were banned from entering Intramuros during the Spanish era, and even Chinese converts couldn’t visit its churches, they built their own church in the heart of Chinatown.

It is notable for its octagonal bell tower (eight being auspicious in Chinese culture); arches and pillars; ceiling paintings of biblical scenes.

St. Lorenzo Ruiz served as a sacristan here in the 1700s.

Rebuilding of the granite church was started after the war and completed in 1984.

This was built by the Jesuits for the growing community of Chinese converts.

Completely destroyed during the Battle of Manila and reconstructed in the ’50s, the structure has become a strange hybrid, indeed: Asian-Hispanic Baroque ornamentation; California Spanish Mission façade; Ionic piers and Celtic windows.

One of the most visited

It is one of the most visited churches in the country, being in a populous area and having as patron the Filipinos’ most beloved icon.

A first in the country, it used steel framing for its dome and iron sheets for roofing, all imported from England.

Here is the ivory image of the Holy Child brought by the galleons from Acapulco in the 1570s.

Home of the Black Nazarene, a dark figure of Christ bearing the Cross that draws millions of devotees the whole year round, this is certainly the most popular church in the country.

In the vicinity it has spawned a mini community with its own subculture, ethos, commerce and trade.

A life-size replica of the miraculous 17th-century icon brought by the galleons is displayed for daily worshippers.

The majesty of this church is enhanced by its twin spires and bluish tint. The interior is notable for the pillars, stained-glass windows, chandeliers.

Constructed of prefabricated steel parts shipped for two years from Belgium, it is the only all-steel church in Asia, and the second of its kind to be built.

Gustave Eiffel, builder of the Eiffel Tower and the Statue of Liberty, was said to have a hand in its design and construction (though this has yet to be documented).

The church was declared a National Historical Landmark in 1973, and has been included on the tentative list for inscription of the Unesco World Heritage Sites.

It is also on the World Monuments Watch list of the World’s Most Endangered Sites, as steel is not impervious to rain.