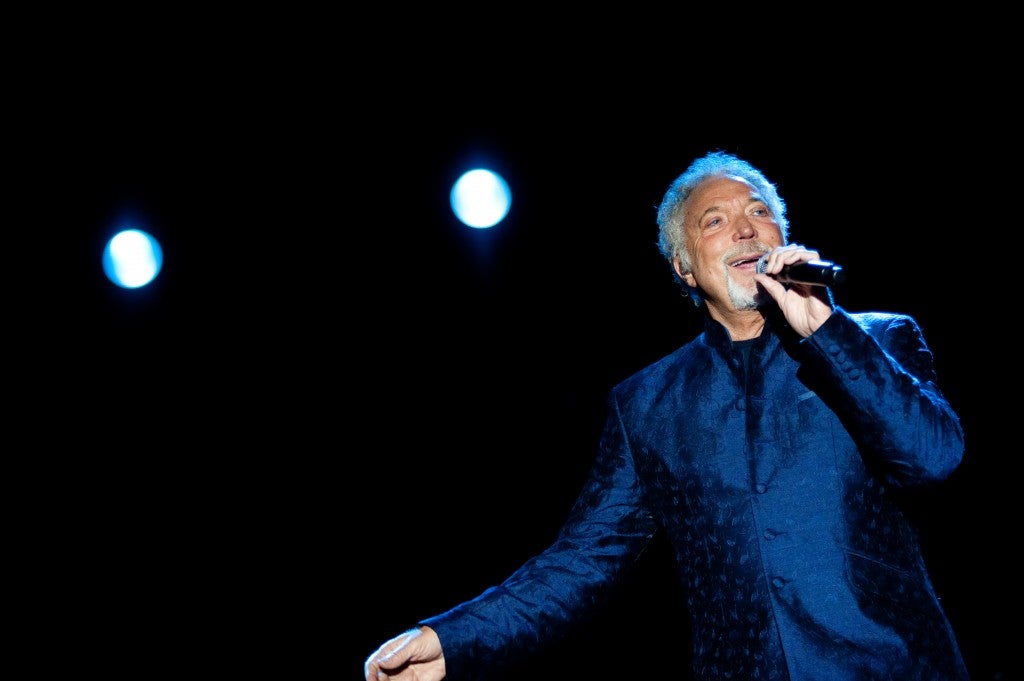 THE LAST time Tom Jones was supposed to perform in Manila was in 2010— but he was forced to postpone due to acute laryngitis. The postponement didn’t mention a new date, so it seemed like a cancellation, until concert promoter  Renen de Guia recently announced that Jones is finally—six years later—coming for a concert on April 2 at Smart Araneta Coliseum.

Better late than never, especially since the legendary singer’s longtime fans here are now senior citizens whose memory of Jones is that of the 1960s sex symbol, grinding his hips while singing “It’s Not Unusual.”

But of course Jones is a lot more than that—having proven his versatility as a musical artist who can do country (“Green, Green Grass of Home”) and tear-jerky ballads (“Delilah”), even reinventing himself in 1988 by collaborating with Art of Noise in a full-on funky cover of Prince’s “Kiss,” and then dropping another surprise 10 years later with the lusty “Sex Bomb.”

It might be asking too much if people would still expect Jones, now 75, to still grind his hips— but apparently he can still do it, judging from YouTube posts of live videos from his recent concerts.

Looking for new places to dine or drink before or after watching gigs has led us to two restaurants and one roadside bar.

Limbaga 77—named after its address, 77 Scout Limbaga Street in Quezon City’s Timog area—is an old house that has been refurbished into a two-story cafe-restaurant that puts a creative spin on Filipino dishes.

Limbaga 77 co-owners Rex Tiri and Sonny Fortuna, who happened to be there during our visit, said that their place wants to strike a middle ground between fine dining and casual.

But the most noticeable thing about Limbaga 77 is that the families and groups of friends dining that night were enjoying its homey vibe.

Live Life is a new vegetarian restaurant along Chino Roces Avenue (near the Mantrade-Edsa side) in Makati, which owner Sylvia Cancio said she opened because she was starting to feel unhealthy from all the meat and fast-food she was eating.

The menu she personally developed looked interesting, and sampling some of them—Baked Mushroom and Zucchini Teriyaki, Tofu Patties, Grilled Vegetable Skewers, Fresh Lumpia and Vegetable Paella—proved that there are ways to serve good-tasting gulay. For dessert, the simple-looking Turon had an outstanding, heavenly sweetness—“because the langka is homemade,” said Sylvia, who actually studied nutrition in New York.

One of the regulars at Live Life is singer Nonoy Zuñiga, who told us he’ll soon be embarking on a new side career, in partnership with Sylvia, something a bit related to his medical background. (He has a medical degree from University of Santo Tomas.)

Kambi is a hole-in-the-wall roadside bar across Cocoon Hotel on Scout Rallos, Quezon City, that musicians like to hang around after their gigs. It looks like a carinderia, but the ambiance turns hip and heady with friends talking about music and good times while drinking beer and brandy.

Oh yes, the carinderia facade becomes significant as soon as you taste Kambi’s specialty, Salty-Spicy Kambing, which the owners, sisters Pie and Jean Ramiro, say is a dish they personally created—and which explains the name of the place.