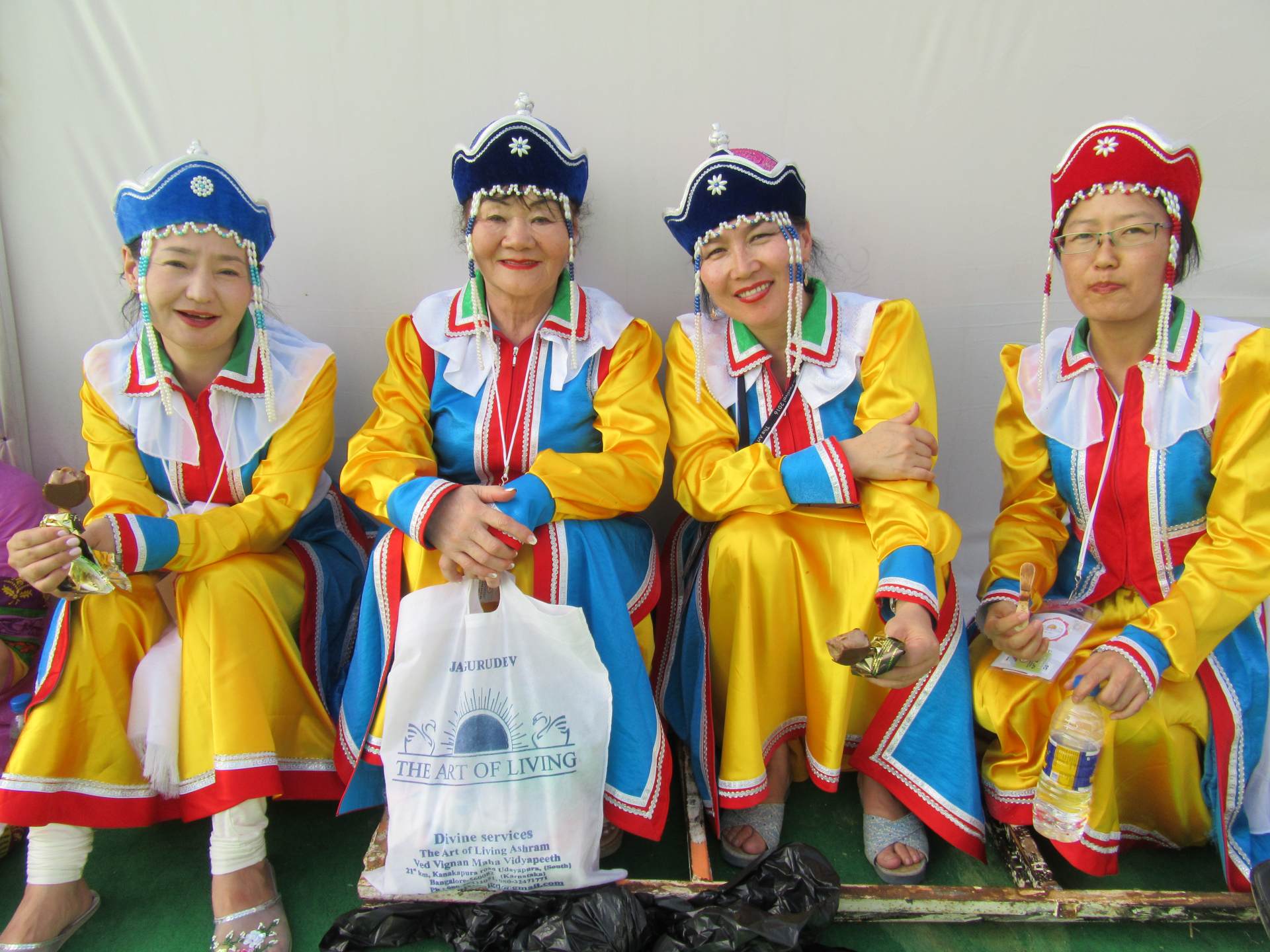 The rain came pouring down with pellets of ice, turning the ground into a muddy swamp. The temperature rapidly dropped as gusts of cold wind swept across the open field.

But through the torrential rain and hailstorm, the multitude of people soaked to the bone kept cheering. Just before nightfall, they were rewarded with a rainbow that appeared on the horizon. Frenzied applause rose from the crowd.

Hindus believe that rain is nature’s way of approving of a celebration. So, while a scene of frantic screaming amid the rain and hailstorm may be disconcerting to a foreign observer, it was natural, even expected behavior for a local.

The City of Delhi was literally at a standstill when the World Culture Festival 2016 kicked off its three-day celebrations, choking major arterial roads as millions trooped to the stage built specifically for the event along the banks of the Yamuna River. A 5,000-strong police force, including a pack of sniffing dogs, was deployed in the area to ensure safety.

The World Culture Festival (WCF) 2016 was a celebration of The Art of Living’s (AOL) 35 years of service to humanity, spirituality and human values. At the helm of this movement, commanding millions of followers worldwide, is Sri Sri Ravi Shankar, its spiritual leader, who calls himself the ambassador of peace.

Known to his followers as a Gurudev, or godman (two journalists were criticized by peers for kneeling down before him during a press event for WCF), he founded AOL in 1981, promoting meditation as the key to achieving world peace. The WCF, celebrated every 10 years, brings together a multitude of cultures to celebrate diversity and humanity.

This year, 155 countries joined in the celebration, with an estimated 3.5 million people from all over the world in attendance.

“Daring the weather and all the inconveniences, we have all gathered here; that in itself is a message, that we are determined to bring positivity to society, where people from different ideologies come onto one platform to agree on the commonly shared principles that the world today really needs,” Shankar said.

Joining for the first time was the Philippines’ multi-awarded dance troupe, Buyogan Festival, from the town of Abuyog, Leyte, which wowed the audience with its energetic performance, a hymn to the Filipinos’ resilience against the overwhelming disaster of Supertyphoon “Yolanda.” The dance, mimicking the cooperative spirit of bees, illustrated the Filipino culture of coming together in times of despair, and also sent a message for one united world.

“A festival by nature is fun. It involves the entire community coming together for a celebration. The Buyogan Festival dance troupe has been instrumental in uplifting the spirit of the people in the town of Abuyog,” said artistic director Victor Hao Cuenco.

The 78-member dance troupe, while pint-sized compared to countries whose groups number in the hundreds, proved that size really does not matter—not when it comes to showing the country’s indefatigable spunk beneath the gentle demeanor.

Niño Vic Beloy, 23, who has been with Buyogan Festival for five years, said that performing in front of a large crowd was a nerve-racking experience. And it didn’t help that the Philippines was the last to perform. (The fund-raisers, among them Abuyog mayor Octavio J. Traya Jr., were able to come up with enough money at the nth hour, so the dance troupe’s performance was inserted at the end of the program.)

Another obstacle they had to deal with was the nippy weather. India in March normally has chilly evenings. During the WCF opening, the troupe was not only soaking wet from the rain; it also got to witness a hailstorm for the first time. It would have been fun—the closest thing to snow he would experience, Beloy thought—but the group was already on stage, in heavy costumes.

For 14-year-old Randy Herboso, who was one of the troupe’s 16 “bees,” it meant that his costume, which sported a large, fluffy abdomen made of foam, now felt a hundred times heavier. The foam acted like a large sponge, absorbing every drop of rain.

Shivering from the crisp evening air, Herboso discovered, by the time it was their turn to dance, that he could no longer jump as high. The foam was simply too heavy. Still, the boy gave it his best and smiled throughout the entire three-minute performance.

The adrenaline, and the sheer joy of performing abroad—it was their first time to travel outside the Philippines—got them through their number.

“It was my dream to bring Filipino dancers to the WCF. I was advised that if I brought cultural dancers, the performance would be too ‘quiet.’ To make an impact, we needed to bring a very energetic troupe like the Buyogan Festival,” said Siaw San Liew, who works for the International Association for Human Values, a sister company of AOL.

A Chinese-Malaysian, she has been volunteering to help typhoon victims in the Philippines since Yolanda struck Leyte in 2013.

The WCF saw more than a hundred performances, from Poland to Germany to Thailand to New Zealand. The crowd witnessed, for example, a Polish dance traditionally performed by aristocrats, and a Bavarian folk dance of peasants celebrating Oktoberfest.

Leaders from various fields were also in attendance.

“What I have seen here the last three days is a glimpse of the future, the only possible future if we want to save this planet,” said Dr. Petra De Sutter of Belgium. “I am from Europe, and we think we have a crisis there, but going outside of Europe, we also see what happens in the world. The only way to solve the challenges of the crisis we have is through love, peace and happiness.”

The Dalai Lama expressed respect for the ancient Indian psychology: “Whenever I can, I request all my respected Indian sisters and brothers to pay more attention to your ancient heritage, and combine its values with science and technology to ensure greater benefit.”

Bishop Marcelo Sánchez Sorondo, an Argentine Catholic bishop and the current chancellor of the Pontifical Academy of Sciences and the Pontifical Academy of Social Sciences, said: “One of the great ways to foster peace and harmony in the world today is through the work done on a person-to-person level. To know each other’s religion and to reduce the differences… Buddhists, Hindus, Muslims, Jews and, of course, people from the religion I share, Christianity, give incredible testimony that The Art of Living helps people get more through whatever faith or tradition they follow.”

The WCF indeed drew leaders from diverse backgrounds, all carrying a message of love and unity.

“If we do a DNA test, we will see that we are all descendants of a common mother and father. Our mother is the Earth, and our soul goes back to the Almighty. That’s why we are all One, we will always be One, and no one can separate us,” said Dr. Ahmad Badreddin Hassoun, grand mufti of Syria.

The next WCF will be celebrated 10 years from now. Countries like Australia and Mexico have already shown interest in hosting.

Meantime, in the Philippines, AOL is actively holding meditation classes to promote inner peace and well-being.

Visit The Art of Living here for more information and/or donations. For a video of the Buyogan  performance at the WCF click here.