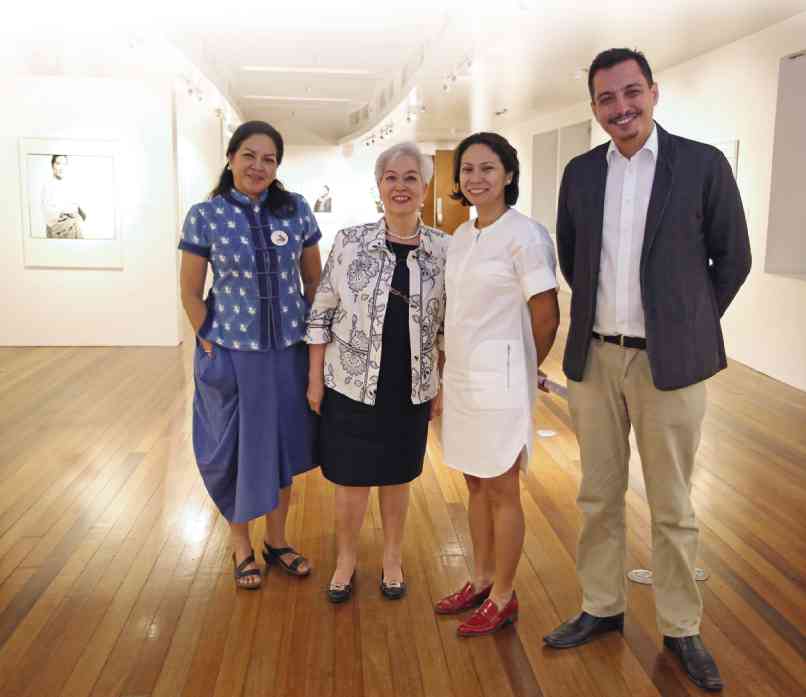 An unending celebration of remarkable women

It’s easy to forget, despite the name, that Silverlens Galleries started out as a space for photography when it opened in 2004.

Today it’s better known as one of the movers and shakers on the leading edge of the contemporary Philippine art scene, a haven for artists such as Gabby Barredo, Maria Taniguchi and Gary-Ross Pastrana, who refuse to be limited to a single medium or style.

The celebration of Women’s Month provided a unique opportunity to revisit Silverlens’ roots with “Filipinas,” an exhibit of photographic portraits of 30 remarkable women whose pioneering work has shaped Philippine culture and society.

Silverlens Galleries founder Isa Lorenzo undertook the project more than a decade ago.

“All my life, I have been fascinated by the Filipina, how she holds power within our societal system, how she manages this power by quietly taking on pivotal roles, and how she uses this power to eventually come into her own,” wrote Lorenzo of the original exhibit.

“The result of their individual journeys is what I am interested in: the strong, timeless Filipina with a humanity that transcends history and legacy.”

Several of the subjects have since passed on, but Lorenzo’s portraits capture some of their remarkable vitality and accumulated life-wisdom.

“Filipinas” was first exhibited at the Cultural Center of the Philippines in 2006. It has since traveled to Europe, where it was shown at the Unesco House in Paris to celebrate International Women’s Day in 2007.

Now it’s back home at the National Museum of Anthropology, where it will remain on exhibit until June 19.

Lifestyle sought some of Lorenzo’s reflections on “Filipinas”:

How did you select the subjects?

We had to get women who were pioneers in their fields, who had reputations that were unsullied, and whom we felt that, to the very end, would have very important contributions to Filipino life through the fields they belonged to: art, education, politics, socio-civic life.

The most difficult part was the scheduling, because they were all very busy. But once the schedule was set, it would take no more than 20 minutes to shoot. I would talk to them for maybe five minutes, and once I felt they were comfortable, I would shoot them as they were talking. That is why a lot of the portraits are very animated.

The youngest subject is Teresita Ang-See, who was 57 when you shot her. Most of the women were born before the war. Was the selection skewed toward that age group? Where are the millennials? Your contemporaries?

We don’t have the track record these women have.  Maybe we can do a second batch, but we have to find women who can stand shoulder-to-shoulder with these women.

Could you have done a series on 30 men with the same level of achievement?

Of course. But the thing is, men tend to die earlier than women. A lot of the men I wanted to photograph had passed on. It was more important for me to do the women, because a lot of them are in the background. They are not frontliners.

Today Silverlens is better known for its visual art gallery than its photography gallery. Has the growth of the art scene outpaced that of photography?

We show everything contemporary. Now Silverlens is an umbrella that covers everything: photography, sculpture, video, drawing, painting. I don’t count the number of photography shows. For example, the current shows are an installation show, a painting show and a collage show.

Just as there are photographers like Wawi Navarroza who use sculpture, who do collage. People are more comfortable now just putting it under the umbrella of contemporary art. But of course, technically the skill level has to be there.

What’s the most dramatic change you’ve seen in the Philippine art scene since you opened in 2004?

First, there’s a really big audience that has just bloomed.  And the audience isn’t just local; there’s a regional and an international audience.

The art world has become more professional, which is good. Now there’s a real ecosystem. When I started, galleries were very small and shows very short. No artists were represented by galleries; they were jumping from gallery to gallery. There were no active museums. There were no foreign visitors coming. We didn’t have representation in shows abroad.

Now all these are happening. There are huge gallery spaces, shows run four to five weeks, we have about 20 artists we represent, not just for shows but for their careers. And there’s so much interest from foreign curators and collectors.

I think that’s the part that’s most interesting, because here it’s fine if you want to keep selling to the same 20, 30 people. But we’re constantly looking for new audiences for our artists—not necessarily buying audiences or collecting audiences, but critical audiences that will make opportunities for our artists, by joining exhibitions, being part of biennales and triennales, being part of museum collections, and being able to interact with contemporary artists on a higher level.

What are your plans for Silverlens?

We’re moving to a bigger space by the end of the year—we’re building our own building, still in Pasong Tamo Extension. We’ve started working with Indonesian, Malaysian and Singaporean artists.

Our new programming includes more regional artists. We have partner galleries we do exchange programs with in Taiwan, Jakarta, Singapore, Hong Kong and Seoul.