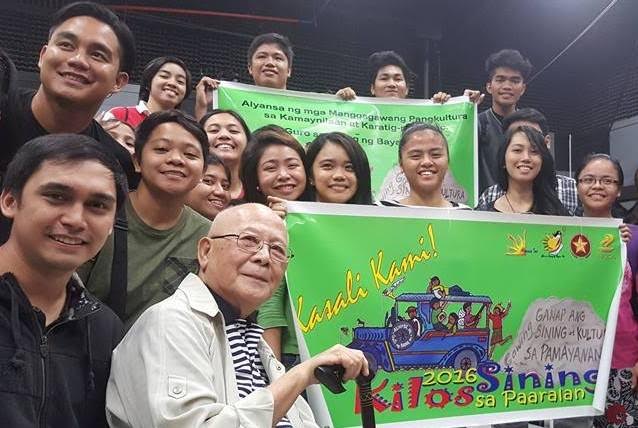 The program had three major components: Danas-Dula, where participants watched productions staged by participating schools and professional groups; Sanay-Danas-Dula, discussion sessions on how to evaluate/review the shows they’d seen; and Usapang Teatro sa Unibersidad at Kolehiyo, a symposium on theater-making processes.

“The aim of KSP was to give students and teachers a way to learn about theater-making through actual engagement, as in act/action, as in kilos,” said Alyansa founding chair and KSP coordinator Glecy Atienza.

“The term ‘kilos sining’ was used by dramatist Severino Reyes to mean ‘actors,’ or ‘doers of performances.’ We evolved the meaning from ‘one who moves art’ to ‘one who uses art to move people to action,’” Atienza explained.

The program subsidized tickets for approximately 300 students to watch from a selection of 30 productions.

The program also featured the results of the Likha Dula-LakBayan project: a play devised by a collaboration of representatives from Luzon, Visayas and Mindanao under the direction and supervision of Sipat Lawin Ensemble artistic director JK Anicoche and dramaturg Ness Roque-Lumbres.

The devised production is the output of this year’s Tanghal National University, College and Community Theater Festival, organized annually by the National Commission for Culture and the Arts. It premiered in Bacolod (Visayas), was staged in Cagayan de Oro (Mindanao), before being performed in Manila (NCR). It was also mounted in Los Baños (Luzon).

The resulting production featured vignettes of different scenes, the cast asking the audience what their wishes for the country were, and concluded with a rendition of the national anthem in different Filipino languages and dialects.