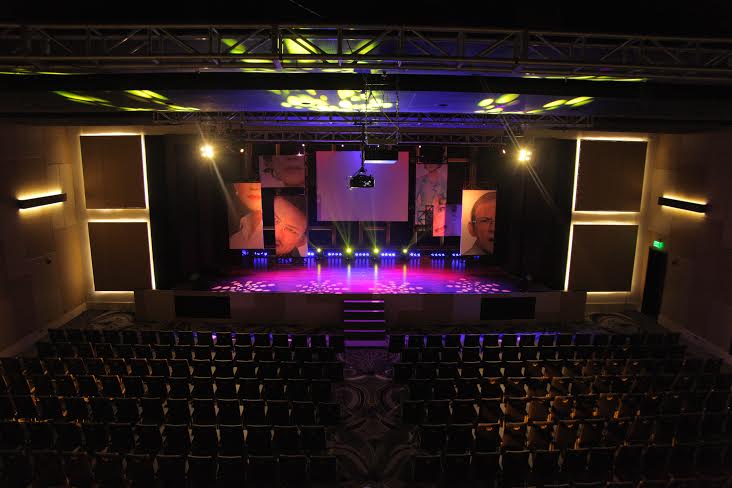 How the Ceremonial Hall of Marriott Hotel at the Resorts World Manila complex will look once it’s transformed into a black box space for small productions. PHOTO FROM RESORTS WORLD MANILA

A new black box theater to rise–inside a hotel

On a recent night at the Ceremonial Hall of Marriott Grand Ballroom at Resorts World Manila in Pasay City, Jon Santos held his one-man-show “WTF: #Wala Talagang Forever (… sa Malacañang).” His satirical “soliloquies” on popular candidates in the coming elections had the audience, many of them seniors in their Sunday best, laughing like children watching the Cartoon Network.

After the curtain call, what was noticeable was the theater-like ambience of the venue. Previously, the new, spacious hall had dining tables and chairs arranged all around banquet-style, but for the show, all the chairs now faced the elevated stage as in a traditional theater setup.

Call it a preview of what’s to come. It has to be baptized yet with a real play or musical, but the Ceremonial Hall will soon be turned into a black box theater, “so we can do plays and small musicals,” said Menchu Lauchengco-Yulo, the “First Lady of Philippine Theater” who now also serves as co-artistic director of Full House, the resident theater company of Resorts World Manila.

The idea is, if the nearby Newport Performing Arts Theater is meant for big productions such as the highly successful homegrown production “Bituing Walang Ninging, The Musical,” the new black box theater will be for more intimate performances or plays.

The 489-square meter space with a ceiling height of 26.9 meters is projected to have a seating capacity of 575 once turned into a theater setup. But the number of seats could be increased. On the night we were there for “WTF,” which was on its final weekend run for March, there were additional rows of about a dozen chairs placed on the loft at the back, beside the sound technicians, directly facing the stage.

During his thank-you segment, Santos said there were nights when more tickets had to be printed to accommodate more requests. He’s talking of VIPs here who only chanced upon the posters of “WTF” at the nearby mall and gaming area.

The more than 575-seating capacity are all good seats, no craning of the necks to get a good view of the stage or last-minute ear-cleaning moments to hear the performer’s whisper-like dialogue, even with the microphone.

As for the acoustics, “there is a little ambient noise within this space and performers can project even without full sound reinforcement,” said Lauchengco-Yulo. “A standard play with professional actors or performers should have no need for support of microphones or sound reinforcement.”

The interior design was expertly handled by the Getty Group with elements of Kenneth Cobonpue, which explains the relaxed, almost homey atmosphere.

The space will retain its name—Ceremonial Hall—“even if it’s set like a black box theater,” she added.

Resorts World Manila’s main performance venue, the massive Newport Performing Arts Theater, has been home to  big-budget productions such as  “The Sound of Music,” “The King and I” and “Priscilla, Queen of the Desert, The Musical.” But the new black box space will give it the flexibility to stage smaller shows—“the chamber ones with a smaller cast,” said Lauchengco-Yulo. “We are working on other original musicals. Hopefully we can be ready with those very soon.”

Once it’s up, the Ceremonial Hall will not be exclusive to Resorts World-mounted productions. “It is open for rental by other theater companies,” said Lauchengco-Yulo.

Jon Santos’ “WTF” returns for a limited run on April 16-17, with 3 p.m. and 8 p.m. shows, at the Ceremonial Hall of Marriott Grand Ballroom in Resorts World Manila.