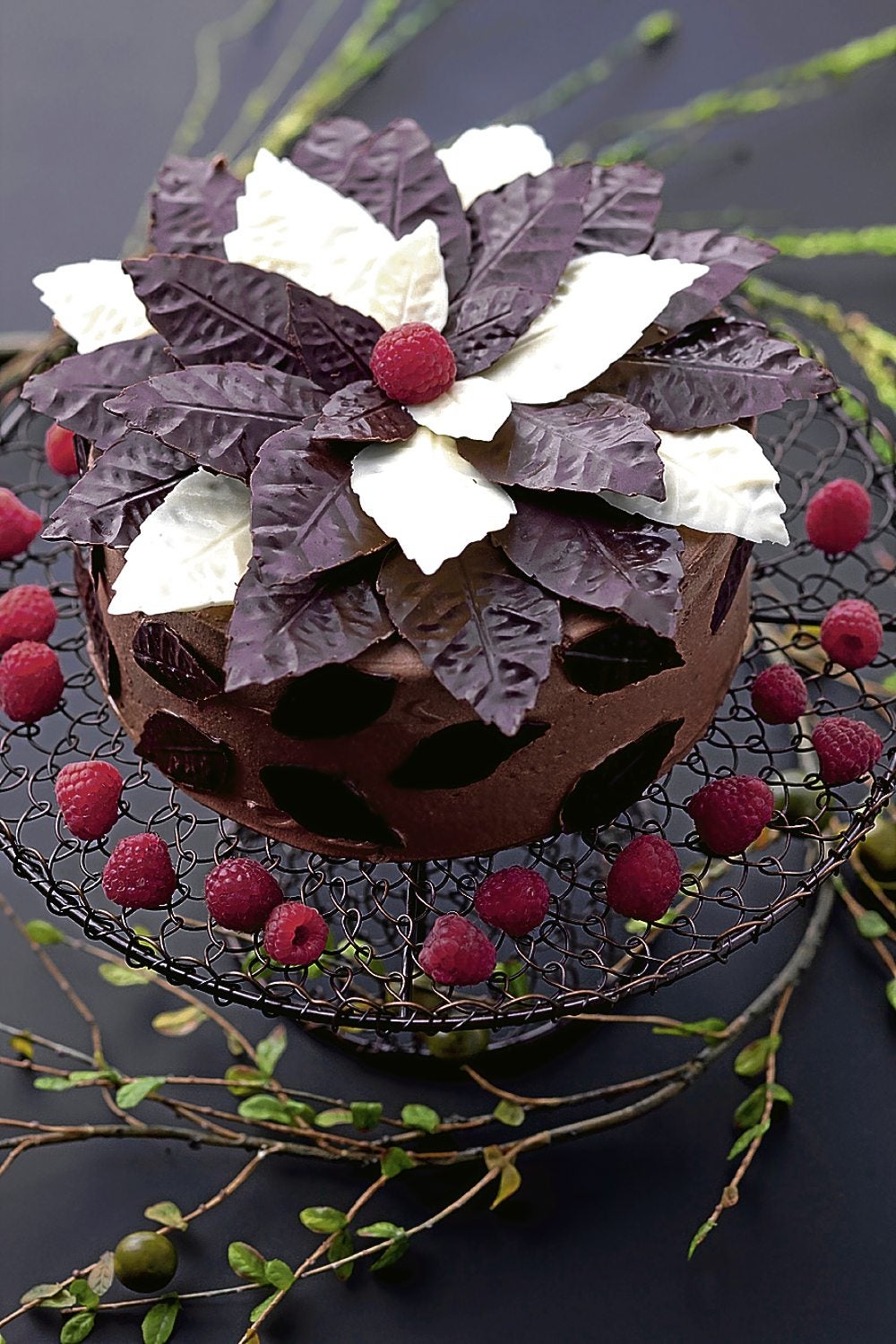 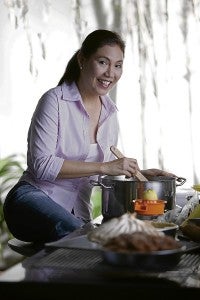 Three years ago, Ginny Roces de Guzman sold Sugarhouse, the hugely popular cake shop she launched in the 1980s when she was 26 years old. Changing visions prompted the partners to let go of the long-time venture, and while it seemed like the best solution, it certainly wasn’t an easy thing to do.

“In the beginning, I couldn’t even walk past a store without feeling bad,” admits De Guzman. “Whenever I’m at Rockwell, I walk on the opposite side of the shop—and yet the staff would see me and wave to me. But that’s okay,” she decides with characteristic optimism. “So we can start something new!”

That’s exactly what De Guzman has been doing ever since. Besides getting into consultancy work, she opened Gustare, a commissary at Bonifacio Global City where she tests and sells many of her food ideas. She also found time to put together “Bake Me A Cake,” her fourth book, but her first book on cakes and her first crack at writing a book by herself.

Photographed by Neal Oshima and edited by Maya Besa, the 16-months-in-the-making project was launched recently at Fully Booked Bonifacio High Street, an “exciting yet scary” milestone for De Guzman, who doubled as author and caterer for the event.

“We served the cakes featured in the book,” she says. “I wanted to show people that food looked and tasted just as good off the page.”

She also wanted to show how easy it can be to, well, bake a cake. Written in a conversational tone and with backgrounds about each cake that read like a story, “the idea behind the 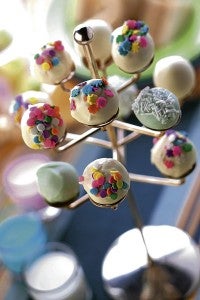 book was to make it friendly. When you read the instructions, it’s almost as if I’m right beside you, telling you ‘Do this, don’t do that,’” she explains with a chuckle.

Interestingly, De Guzman approaches baking a cake like a fashion project. Like a basic Little Black Dress that you layer and match with accessories, a cake—be it a sponge, meringue, chocolate or butter cake—can become anything you want it to be, by “dressing it up,” so to speak, with frosting and a variety of ingredients.

“From my experience in Sugarhouse, you can have a collection of 25 desserts even with a base of three or four cakes,” De Guzman says. “Customers are overwhelmed by the choices, but really, when you break it down into components, it’s very simple.”

Of course, putting all that knowledge in book form was a different story. Despite being “warned” about Oshima’s no-nonsense working style, De Guzman chose the photographer because of his ability to shoot food that looked “natural and real,” a quality she admired in his pictures for Amy Besa’s “Memories of Philippine Kitchens.”

Indeed, absolutely no food styling was done on any of the cakes that appeared in “Bake Me A Cake,” a commendable yet tedious process.

“The first time I baked a cake for a shoot,” shares De Guzman, “Neal looked at me and said, ‘Only one? What if it didn’t look good in pictures? And what happens after we slice it?”

In any case, the two to three cakes she baked in succeeding pictorials never went to waste; De Guzman and the crew gladly devoured them after each shoot.

While writing recipes is second nature to De Guzman (it was she who penned the ones featured in her family’s cookbook compilation, “Celebrations”), writing in prose was not.

“I felt vulnerable,” she admits. Thankfully, friends like writer Karla Delgado (who went over her first draft) and sisters Maya Besa and Tina Besa (the book’s editor and designer, respectively) made the process an enjoyable one for the publishing newbie.

“They would use terms like ‘hi-res,’ ‘jpeg,’ ‘and your color’s running into the gutter,’ and I wouldn’t understand,” De Guzman says, giggling. “But Tina, who designed the book from San Francisco, would e-mail me pages and I’d be so excited to receive them every morning.”

Her following books should be a breeze. Fully Booked’s Jaime Daez, which published “Bake Me A Cake,” is keen on De Guzman creating a series. “We want to do a pie book, a cookies book and a bread book,” she says. “But what I really want to do is a Filipino cookbook.”

For De Guzman, the eldest of four girls and niece and godchild to artist-writer Alfredo Roces, it was Betty Crocker’s cookbook that first led her to the kitchen.

“My mom Marietta, who had to take care of my sisters, gave it to me and didn’t mind if I made a mess,” she recalls. Then all of seven years old, she remembers going over the recipes and saying to herself, “I can do this!”

Or so she thought. Her father, Marquitos, who ate everything she made, would eventually admit that not all her creations were as tasty as she believed. But by then it was too late: With practice and the encouragement of family members, she baked for school fairs at 10, and was teaching neighborhood kids simple dishes when she was 13.

Years later, that confidence and fearlessness would translate to the cakes of Sugarhouse, a bakeshop known for its innovative treats, including its French Apple Pie.

De Guzman laughs at the story behind one of her bestsellers. “We only called it that to distinguish it from the American Apple Pie, which has a double crust. Our French Apple Pie

had a crust with crumbs and grated cheese. But in reality, the French would never put cheese on top of anything sweet. Still, it was a hit that so many people copied.”

Had her partners let her, she would have wanted to come out with a cookbook of Sugarhouse favorites.

“But they didn’t agree because they said it would mean sharing trade secrets. But nothing is totally original,” she declares, when asked where she gets her ideas. “Of course, you get inspired by people or by reading books. But a cake is almost always your interpretation of something that already exists.”

A different way to learn 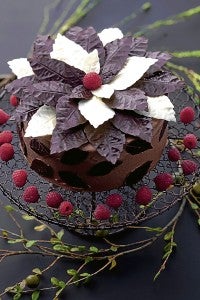 While her years running Sugarhouse seemed like education enough, De Guzman decided to study her craft formally. Then in her 30s and already with kids, she enrolled in a patisserie program at Culinary Institute of America, an opportunity she pursued “out of curiosity, and because I married young and never had the chance to study abroad.”

She interacted with students who were very much like her, people who worked in commissaries and hotels. She regards her time in CIA “as an affirmation of what I already knew. Being with my classmates was where I learned a lot because we had a constant exchange of ideas.”

At a youthful 50something, this mother of four boys and a girl is as eager to explore new things as she was when her mother first handed her a cookbook at age 7.

“You always have to have a self-improvement project, and right now, I’m working on my butt,” laughs De Guzman, who stays fit with regular home sessions of hatha yoga and belly dancing. Her daughter and the help find the latter amusing, but De Guzman insists, “if you don’t dance, you will move like an old person!”

For all the cakes she bakes, De Guzman does not follow a diet. She eats and drinks everything in moderation, including her own dishes and desserts.

“I like what I cook,” she exclaims, “because that’s exactly the way I want it to taste!”