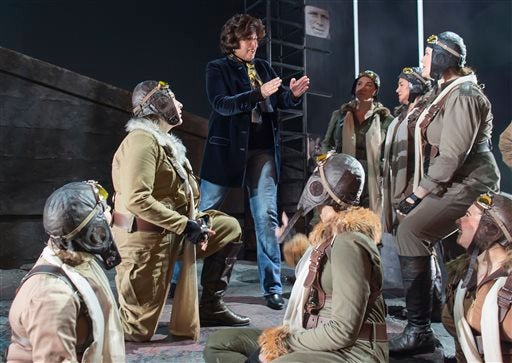 WASHINGTON — For the Washington National Opera, completing Wagner’s “Ring Cycle” has been an endeavor worthy of its epic subject: Launched with great promise, then abandoned amid financial problems, the full work is finally being staged a decade after it started.

The three cycles that will be performed at the Kennedy Center from April 30-May 22 are largely a tribute to the imagination and persistence of one person, Francesca Zambello. She has directed all four of the operas in the cycle, and now, as artistic director of the company, she has seen to it that her budget had the roughly $10 million to put them all on stage together.

“We’re here in Washington, America’s seat of political power,” Zambello said in an interview, “and I felt it was important for the city’s opera company to have its own ‘Ring.’ It is such a profound work and says so much about how power can be used, and abused.”

Wagner’s sprawling music drama — which took him 26 years to complete — poses severe tests for any opera company. It totals more than 15 hours of music and call for a huge orchestra and singers of rare vocal stamina and interpretive gifts. Equally important, it requires a director with the vision to present Wagner’s retelling of Norse and Germanic myths in ways that speak to modern audiences.

The Washington project began in 2006 when Zambello staged the opening opera, “Das Rheingold,” which tells of the god Wotan’s decision to steal the Rhinemaidens’ gold to pay for his new home, Walhalla. That sets in motion events which ultimately lead to the downfall of the gods, the destruction of the world and, possibly, its rebirth.

“I decided to use the backdrop of America in terms of myth and content,” she said. “And I felt the pure beginning of it was so much like the gold rush, which was really the first time of ripping minerals out of the ground of America.”

Later scenes depict Wotan and his cronies as American industrialists. “Our families, the Carnegies, the Mellons, the Rockefellers . they really were like gods,” she said.

The second opera, “Die Walkuere,” followed in 2007 and “Siegfried,” in 2009, but by then the nation had been shaken by the financial crisis and plans to stage the finale, “Goetterdaemmerung,” had to be scrapped. Instead, an unstaged concert version was performed.

“It was a big disappointment,” Zambello said. “Totally due to the meltdown, that whole period.”

Fortunately, David Gockley, then general manager of the San Francisco Opera, had signed on to bring the production to his company. Three complete cycles played there in 2011.

Now the saga is back where it started, but the intervening years and the trip to the West Coast have altered some of Zambello’s thinking.

“So much of it is about the destruction of the environment, and that fit in with California,” she said. So she’s taken inspiration from the paintings of Albert Bierstadt and photographs of Ansel Adams to make the opening scene of “Rheingold” more clearly an illustration of “the perfect natural world” before it is despoiled by greed.

“By the time I did ‘Goetterdaemmerung’ I wanted a more futuristic, ‘Mad Max’ kind of feeling . And now we’ve made it even harsher. I mean who would have thought global warming … would have been as bad as it is now.”

She’s also doing more to clarify what she sees as an optimistic ending to the cycle, in a world reborn thanks to the strength of women.

“In ‘Goetterdaemmerung,’ the Gibichung women are beaten down and submissive,” she said, adding that Wagner even reflects that in the choral singing, which is dominated by male voices. “I mean, the women sing like 12 notes.”

Zambello’s controversial take on the cycle’s conclusion shows Bruennhilde, Wotan’s daughter, having given birth to a child who comes on stage holding a sapling, a sign of nature starting over again.

“I’m making that clearer this time,” she said. “Bruennhilde creates the regeneration of nature. Women are going to always bring rebirth.”

All three cycles will be conducted by music director Philippe Auguin. Baritone Alan Held stars as Wotan, tenor Daniel Brenna as Siegfried. Bruennhilde is sung by soprano Catherine Foster in the first two cycles and by Nina Stemme in the third. TVJ