The devil lurks in the devilishly good ‘The Pillowman’ | Inquirer Lifestyle ❮ ❯ 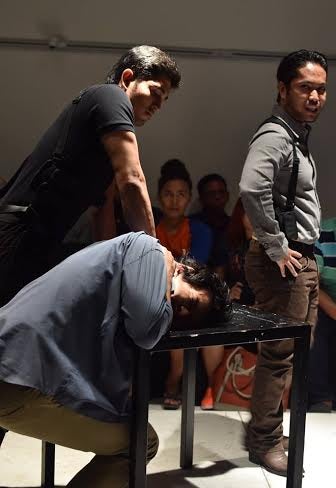 Gabs Santos, Acey Aguilar and Renante Bustamante in a scene from “The Pillowman,” adapted into Filipino and directed by George de Jesus III for Egg Theater Company. Also in the cast are Paul Jake Paule alternating with Paolo O’Hara. PHOTO BY KRISTINE BALMES

The devil lurks in the devilishly good ‘The Pillowman’

Fear—the truly hair-raising, spine-chilling sort—bears a new face in the theater these days, and his name is Renante Bustamante, who’s giving a force-of-nature performance in Egg Theater Company’s production of Martin McDonagh’s “The Pillowman,” a tale about tales and the twists and turns they can throw at an otherwise quiet life.

As the detective Tupolski, the self-appointed “good cop” in a tandem sent to interrogate the writer Katurian (Gabs Santos) about a series of grisly murders, Bustamante hardly looks the part. But stare into his eyes a second longer and let his voice linger in your ears, and you’ll be surprised at how quickly your spirit shrinks and bends to this man’s will.

It may be subversive to say that Tupolski is the star of this staging of “The Pillowman,” directed by George de Jesus III; that honor, at least on paper, belongs to Katurian himself. But Bustamante, with only a raised brow, a curl of the lip or the slightest shifts in a voice that seems to emanate from the bowels of the earth, cuts a magnetic, menacing figure as Tupolski, a presence looming large in a production that’s often too intimate for comfort.

This is “The Pillowman” by way of De Jesus’ Filipino translation, which demands more than a single listen, if only for its fine-grained linguistic switches between the pedestrian and the poetic. Crass cursing and shouting run aplenty, but so do occasions for transporting imagery and metaphor.

Katurian, you see, is the author of some 400 stories, almost all of which have to do with murdering, mangling, mutilating a child. Then a crop of kids turn up as corpses in his neighborhood, all of them dead by means creepily similar to those detailed in his stomach-churning bibliography. Thus the interrogation, which is essentially the entire play itself.

Tupolski is assisted by “bad cop” Ariel, played by Acey Aguilar, who’s obviously having lots of fun with the character’s temperamental, if not outright violent, nature.

A second subject gets dragged into this inquisition: Katurian’s brother Michal (Paul Jake Paule, alternating with Paolo O’Hara). Michal suffers from some form of developmental delay, and Paule beautifully strikes a balance between humor and pity, his wide, blank eyes and deliberately dopey delivery shaping a convincing portrait of a mind trapped in a body beyond its years.

Santos as Katurian is no slouch here, in case you’re wondering; it’s just that, during the quieter moments, he tends to lose grip of that burning intensity that should make Katurian a compelling protagonist throughout. (The result, perhaps, of having been away from the stage for too long?)

But throw him in the midst of a confrontation, an emotionally charged scene, and there is much truth and ardent feeling that Santos summons and sustains. Even better, his connection with Paule is genuine; the bond they form as brothers is heartfelt and heartwarming.

It is this connection that renders Katurian and Michal sympathetic characters throughout the show, their pain impossible not to be felt despite the eventual revelations. Much of this empathy is also a direct consequence of the staging. With its theater-in-the-round setup—the edges of the stage are literally next to the viewer’s feet—this production ensures that the audience misses nothing, not a single punch or kick or graphic gunshot.

The staging is only one of the differences between this “Pillowman” and the first time the play was staged in Manila two years ago—a one-night-only reading of the original script by The Sandbox Collective during the Imaginarium festival at the Peta Theater Center.

That show, directed by Ed Lacson Jr. and starring Audie Gemora (Katurian) and Richard Cunanan (Tupolski), was “the year’s most entrancing piece of theater,” we wrote, and remains a yardstick for any subsequent production of the play hereabouts.

Lacson’s “Pillowman” appeared to hew closer to McDonagh’s original vision for the play. Never less than funny, it was a black comedy from start to finish, the gripping stories within seizing the spotlight.

De Jesus’ “Pillowman” feels like a whole other creature. The stories and their repugnant, comedic nature are still there, given conscientious treatment by Joee Mejias’ charming video projections, but they are no longer its stars.

Instead, this “Pillowman” is now a procedural bereft of happy endings, and one that mirrors the corrupt practices of the times. Terms like SOCO come up in the conversation, and for a moment, you wonder just exactly where we are and at what point in time—this country in a couple of years, maybe?

If Lacson’s “Pillowman” left you enthralled, hungry to listen to more of these gruesome stories, this one brought about a sense of liberation. You exit the theater having seen the meltdown of goodness and the creation of dread. But you’ve also escaped the devil’s gaze—Bustamante’s eyes chillingly staring Santos’ Katurian into submission—and lived to tell the tale.

E-mail the author at [email protected], or visit www.vincengregorii.blogspot.com