‘Charlie Brown’ is coming to town 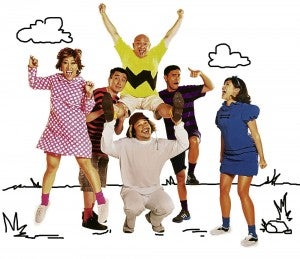 The Broadway musical “You’re a Good Man, Charlie Brown” based on the Peanuts comic strip by Charles M. Schulz will be staged by 9 Works Theatrical in February 2012.

Director Michael Williams, who recently played Captain Hook in Repertory Philippines’ production of “Peter Pan,” describes the musical as a relatable, well-written story about childhood innocence, rendered in catchy music and lyrics by Charles Gesner (with additional materials by Andrew Lippa). The live orchestration will be provided by 9PO, the company’s in-house orchestra headed by Joseph Tolentino.

The actors were revealed one by one in 9 Works’ Facebook page.   Fans earlier got curious when a teaser was uploaded on the  Facebook page: a thick black zigzag line being drawn on a yellow background amid happy music (Charlie wears a trademark collared yellow shirt with black zigzag stripe). The reactions were varied; some instantly knew it would be “Charlie Brown” and got giddy.

“A lot were like, ‘What’s that?’” Guevara says, laughing.

“Pokemon, the musical!” Williams chimes in.

Executive producer Santi Sta. Maria says while kids may not be too familiar with Charlie Brown, their parents are. The company is making sure the show will delight both.

“The whole idea is there’s a child in everyone,” Williams said. “I’m observing children to make the musical accessible to kids, and from the initial readings, parents usually say, ‘Hey, my child is exactly like Lucy or Sally.’”

“Charlie Brown” teaches kids to “do your best; try your best sincerely and don’t try to be someone else,” says Guevara. “You cannot not relate with the characters—as a parent or as a child.”

“I’ve been bullied,” said Guevara. “First I was a bully because I was tall until Grade 4, but by Grade 6, I was the second smallest in the class.”

Williams said he was also bullied as a kid.

Charlie Brown deals with stuff like that—bullies, fighting back, growing up and having fun while at it.

Guevara shares that Charlie Brown has been a lifelong dream role for him. (Raymond Lauchengco played the character in a Repertory production in the early ’80s.) He grew up with the Peanuts comic strip as a kid, but completely forgot about it during high school and college—until Christmas of ’99 when he saw a copy of the musical’s CD in then Tower Records in Glorietta, Makati.

“Finding a theater CD in record bars was a big deal that time. I listened to it and wow! I also read that it did well on Broadway, and ran for about eight months. So I shared the CD with my barkada. Uso pa noon ’yong ‘I’ll burn you a copy.’ So I burned them copies until it made its way to Trumpets,” he recalls.

“Charlie Brown has two versions, the original one from 1967 and that one in ’99. They changed a lot of the music in the new one; Peppermint Patty was replaced with Sally, who had most of the new songs.”

Guevara wanted to bring in “Charlie Brown” as early as 2004 but “at the time, the rights were too prohibitively expensive.” When it became feasible, Guevara had initial reservations playing the lead because he’s already in his 40s. But Williams finessed the problem by casting other actors of roughly the same age range and generation.

Gaba has been on a long break from stage, focusing instead on the TV show “Art Angel” where he draws for kids.

“I’m trying to memorize my lines—and I’d rather draw!” he says, laughing. “It’s a challenge, and I’m glad to be back on stage.”

He is also the set and costume designer for the show. “It would have gigantic everything: couch, dog house, mailbox, wall. The production will be very cute.”