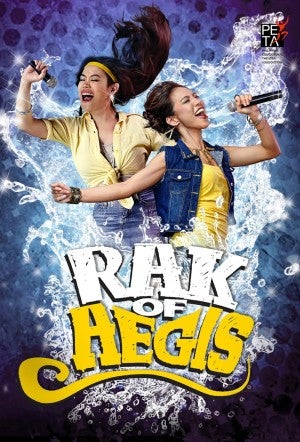 The Philippine Educational Theater Association (Peta) presents an exciting lineup of comebacks and new projects in the run-up to its 50th anniversary.

Opening the 49th theater season is one of Peta’s biggest hits, the comedy musical “Rak of Aegis,” back for its fifth rerun from June to August with 82 shows.

Since its opening in 2014, “Rak” has continued to wow audiences and critics, with well over 200 shows and more than 20 citations in the Gawad Buhay awards for performance and technical categories.

Peta’s 49th also sees a Filipino adaptation of William Shakespeare’s “The Tempest.” In partnership with The British Council and Japan Foundation, and directed by Royal Academy of Dramatic Art’s artistic director Nona Shepphard, “The Tempest” reimagines one of Shakespeare’s most famous works by using Super Typhoon “Yolanda” in telling the story of a powerful wizard named Prospero.

This Filipino adaptation will be written by award-winning writer and librettist Liza Magtoto, and will debut in November.